Stuck on the sidelines 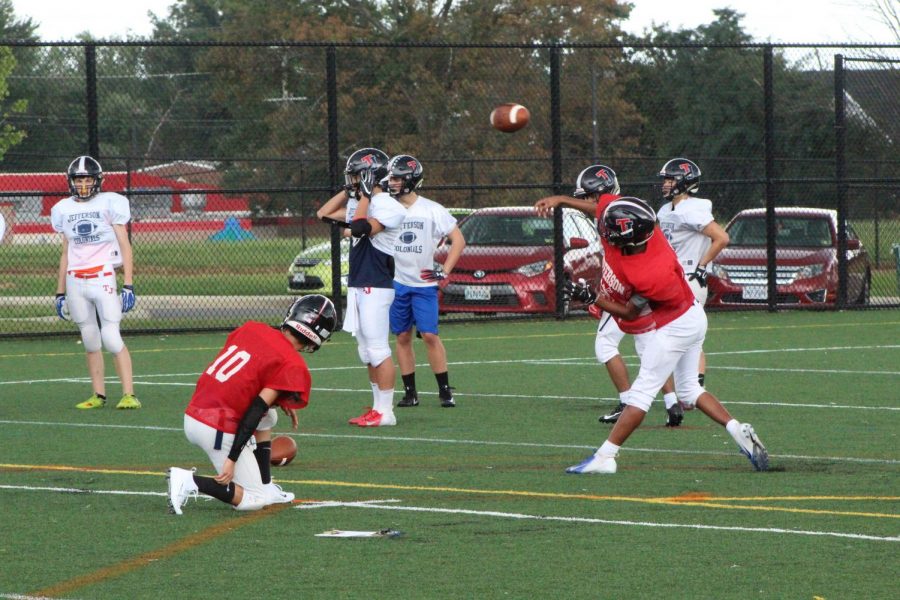 Having lost both games in the 2018-2019 fall season and with only a week left until the varsity football team’s match against Manassas Park, starting quarterback senior Sohail Mohanty throws the ball to his wide receiver in a drill during football practice after school.

Due to the recurring lack of underclassmen recruits, Jefferson’s football coaches were forced to temporarily cut the JV team from the program for the 2018 fall season. Although unfavorable, this decision was met with only little astonishment from both the coaches and players, as the team’s rosters have decreased dramatically in size over the past few years.

“Well it’s not exactly a huge surprise — there weren’t that many freshman last year and our class [of 2020] was not very large either,” linebacker junior John Jones said. “But at the same time, it’s still a huge disappointment to me because it means that we don’t have very many players, and… football is a sport that needs a lot of players. With injuries, and being tired, it’s a very intensive sport, and we need people [to serve as replacements].”

In 2017, the Varsity and JV team had a combined total of 53 players, with 11 of them being freshmen. For this season, however, the Varsity team only has 32 players and recruited only six additional freshman from the Class of 2022, marking about a 25% decrease in players from the previous year.

“We have an incredibly low player count for football,” Jones said. “For comparison, Oakton football regularly receives almost 100 freshmen coming out, and they are struggling themselves with the number of players because they only have 100 players.”

Without enough underclassmen for a full JV lineup, the Varsity team now combines seniors, juniors, and sophomores together, which means that novice players spend more time on the sidelines watching the upperclassmen on the field rather than actually playing themselves.

“If we don’t have a JV team, [then] we have underclassmen who are probably not getting playing time on the field until their junior year, which is not good for experience,” Jones said. “The easiest way to get better at a sport is to play at the highest level, and for us, that is games. That is the most intense situations that we get put in. If they don’t get the opportunity to do that, it’s gonna be harder for them [when they become starters for Varsity].”

In addition, the ongoing lack of freshman being recruited to the program has created a continuous snowball effect. As upperclassmen graduate, and the sparse group of freshmen eventually become juniors and seniors themselves. This means that overall, more players are leaving the team than joining every year, causing the program to shrink continually. In fact, the current varsity football team is almost 50% seniors who will not be present in the following 2019-2020 fall season.

“Now, we may or may not have a football program next year. If we can’t get the numbers, then we can’t run a program [anymore],” cornerback and wide receiver junior Neel Mandapati said.

For this reason, both football players and coaches at Jefferson have become increasingly worried and frustrated about the program’s unclear future.

In order to prevent this from happening, the football program has been trying to step it up in terms of drawing more players to the team.

“We’ve been pushing for recruiting, especially on player basis, and we’re working with a couple of the athletic department heads to see if we can find other ways to recruit players for football. We have two or three kids already that have been recruited, so next year, and I guess possibly this year as well, we might be able to field the JV team for the last couple of games,” Jones said.

In the meantime, the football team remains optimistic as the players unite in keeping their program alive.

“In spite of all this, part of the beauty of our football program despite not having a lot numbers, despite having to play both sides of the ball, despite getting tired a lot faster than other teams, is that we’re willing to do what we have to do and we enjoy playing and it’s a fun sport,” Mandapati said. “We just go out there and have fun.”