Who I am, not my title

Head of Security Bob McCormick shares his values as a former professional athlete and engineer to motivate students to embrace hardships for future successes. 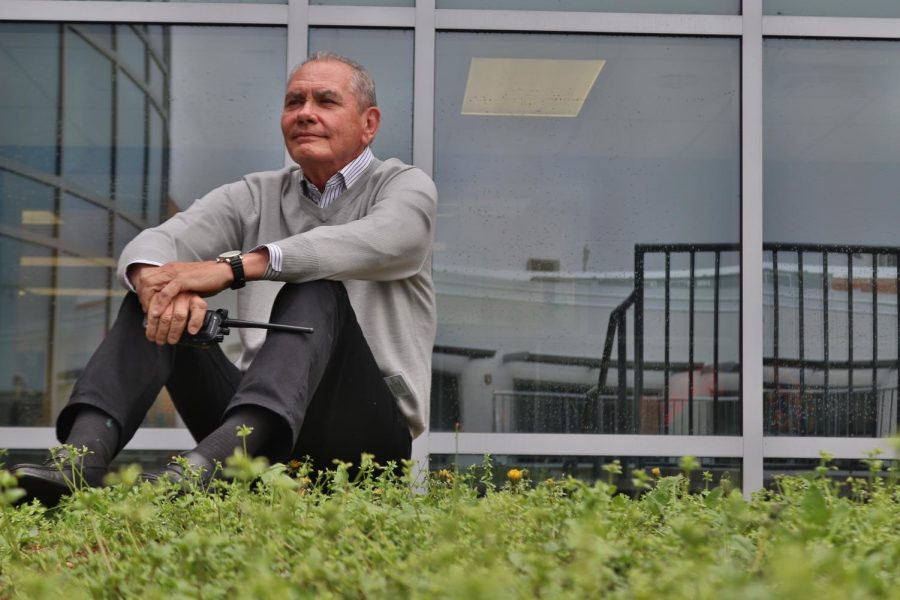 The head of safety and security for the 12 years, Bob McCormick aims to defy the current misunderstanding of the student body in interpreting him and his role as a rigid and strict character. He goes on to share his story of sports injuries, past ambitions, and future hopes. "I’m completely open. I think my life experiences have been pretty interactive. It’s not enough to open and file, you need to talk to the person to find out why they are successful, if they are, or why might not be. It’s always good to have conversations with people that are struggling because it gives you insight as to how you can do your job better," McCormick said.

Bob McCormick refuses to be defined by his title. Currently the head of safety and security for the past 12 years, he represents values beyond his grip on the the radio and his role in overseeing detention. Rather, he embraces a passion for mentoring and coaching as a former professional athlete, enthusiasm for  through his marketing background and a love of learning as an engineer.

His first passion shaped his endeavors as an athlete from the age of six.

“From the time I could remember standing up, I remember throwing a baseball,” McCormick said. “To me, it was a learning experience- getting better and competing to get better.”

Professional Career as an Athlete

In building his athleticism, he found his biggest coach and mentor at home: his father. Rather than focusing on mistakes throughout games, his father only encouraged and guided.

“My father never once came up to me after the game or any of those events and asked ‘what were you thinking or why did you do that.’” McCormick said. “He will bring up a circumstance [and] teach me.”

McCormick took his passion for sports to John Carroll University in Ohio, where he pursued a professional baseball contract. Along with his contract, he took a scholarship in the football and basketball teams as part of the Division 3 school.

“[As an athlete], learning how to manage [free time] was the most important things to learn in college. There were no personal trainers, university gyms, or weight lifting machines as we have now. I found that when I was out of season, I was a worse student because the time for me seemed to go slowly. I liked being active [and] involved,” McCormick said.

During his time training for football, however, he faced the most critical injury in his career.

“I was doing bench presses with something called Olympic bars. It was 7 foot wide [with] weights on both sides. I had one hand on the bar and I looked like I had the other hand on the bar, but I didn’t really secure the right hand. [My spotters] let go of the thinking that I had it. The weight started to come down on my hand and I turned to get away from my head. When I did, I tore the muscles from my neck all the way through the hamstrings on both sides. It was like tearing a piece of paper,” McCormick said.

The injury left McCormick in a body cast for over two weeks. Even after recovery, the muscles in his lower back never regained their full strength, bringing his professional athlete career to a halt.

“It was the most painful thing I had gone through in my life,” McCormick said. “My whole life I wanted to be a professional baseball player. I could pitch 9 innings but the recovery time was 2 weeks. You can’t do that in professional baseball. There was no one back in those days called relief pitchers like they have now. ”

Soon after, McCormick faced another shocking news: the loss of his father.

“Emotionally, it was crushing,” McCormick said. “The most difficult time of my life was dealing with the loss of the person I consider to be the most influential [person] that I had on top of recognizing that I was not going to play baseball anymore.”

Following was an emotional rollercoaster.

“Truthfully I didn’t deal with it well for a while,” McCormick said. “In my mind, I was supposed to be extraordinary. Having those issues felt like some kind of a weakness. I was lucky enough to sort through them and get through it all.”

McCormick continued his education with an engineering prospect. He worked for the Goodyear Tire Company to design commercial tires but found an even greater passion in distinctly opposite field: marketing.

“I was sitting in my cubicle when someone from the Global Engineering Department came in and said he needed someone with speaking experience [for a conference in San Francisco]. He introduced me to the sales division of the company [and] it fit me like a glove,” McCormick said.

Ten years after, McCormick went on to become the Vice President for the marketing field. Twenty years after, he left Goodyear to starting his own business, a program called Fairfax Stars Amateur Athletic Union (AAU) Basketball Program. Through the program, he used his father’s technique of coaching to guide the athletes, winning over three national titles as a coach.

“I really wanted to [make the program] because my father had a big influence on my life and helped me with my athletics,” said McCormick. “[I also want] to let the [players] play through their mistakes because it’s a learning process.”

The Fairfax Stars Program allowed McCormick to channel his personal experiences into a professional environment.

“[My experience in college] gave me the confidence to now talk to my own players. I’m really fortunate in all those things that happened to me in that now, I recognize issues in players, both at home and at school.”

Few years after starting his program, McCormick’s background in security measures and installations through Goodyear presented him with a new opportunity as an assistant security person at Jefferson.

“What I recognized in the student body here was that they reminded me of my own basketball program in the sense that the students were incredibly motivated; they wanted to do their best. They had a pretty good idea of how to do that on their own, but… needed little pieces of guidance along the way,” McCormick said.

However, over his 12 years in the safety and security team, McCormick found fewer opportunities to connect to the student body due to a perception of his title. In order to correct this assumption, he has emphasis his role not as a disciplinary figure, but an investigatory one.

“When I walk down the hallway, [students] don’t see Mr. McCormick, someone willing to have conversations, but they see the title,” McCormick said. “[My job is] a fact-finding role and a safety role to keep the environment for them to be as safe and healthy as it possibly could be. The toughest thing for me is to get them to understand and it’s hard.”

McCormick plans to begin eighth period sessions on May 23rd in hopes of sharing his experiences with injury and emotional hardship with students that goes beyond his role as the head of security, but as a supporter for their endeavors.

“Do not be afraid to fail, to learn, and to excel. What holds people back from doing extraordinary things is fear. It’s true in every block of life. Your extraordinary doesn’t have to be the same as my extraordinary, let’s embrace it,” McCormick said.