Glowing Up to Freshman Lock-In 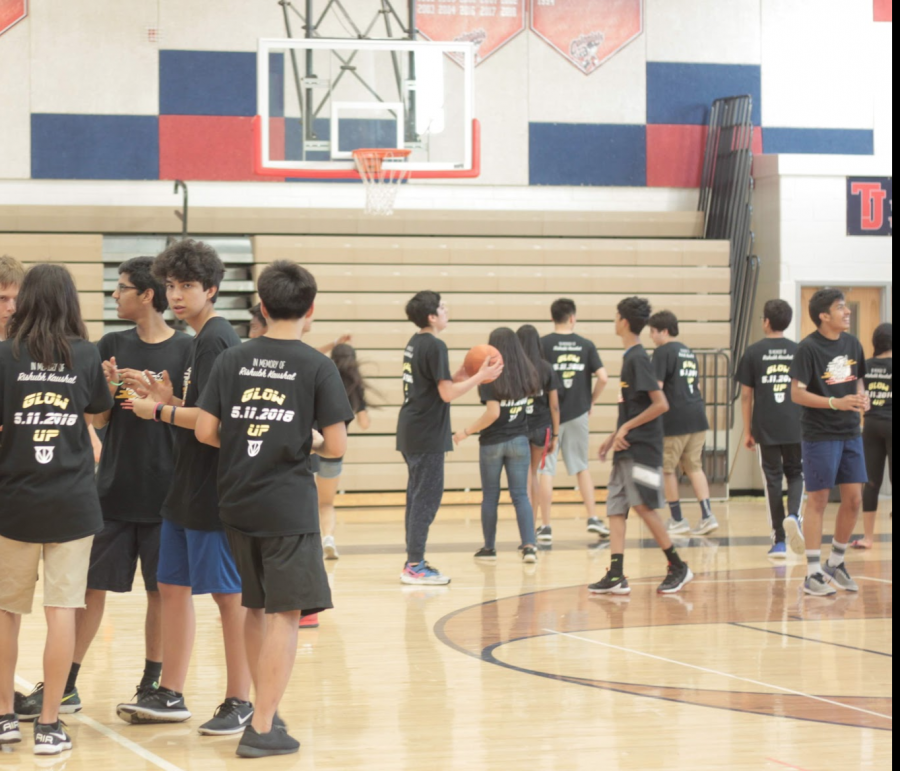 Donning their Lock-In shirts, freshmen entertain themselves in the gym before the event begins.

If you were to walk into a school building at 2 a.m., you would expect it to be dark and empty.

And on any other night, it would be. But from 6 p.m. of May 11 to the morning of May 12, Jefferson was filled with enthusiastic freshmen making memories at 2021’s Freshman Lock-In.

Upon walking in, freshmen were given a complimentary t-shirt to commemorate the event.

“The t-shirts really showcased the amazing creativity of our freshman class,” 2021 co-senator freshman Udbhav Muthakana said. “Special thanks to Tammy [Ding] and Andy [He] for the time they put into the shirts.”

This year’s Freshman Lock-In, themed “Glow-Up,” featured activities such as an inflatable obstacle course, a video game tournament, and an escape room.

“My favorite part was probably just chilling with my friends late in the night playing board games or [Super Smash Bros] in the commons,” lock-in attendee freshman John Lee said.

This event took several months of planning by 2021 Class Council. They first began by deciding on an appropriate theme.

“It was pretty tough deciding on a theme since so many ideas were going around, but we eventually settled on a glow themed event with glowsticks and neon decorations,” 2021 secretary freshman Jordan Lee said. “We wanted something that would stand out during the night, and thought it would be a cool idea to have freshman light up the night.”

Lee remarks on the difficulties encountered while putting together an event as major as Lock-In.

“Surprisingly, the food took the most effort because we had to buy so much and know how much to buy for each student,” Jordan Lee said. “We had to fill out big purchase orders for pizza, and the teachers had to go on a shopping spree to Giant.”

The night of Lock-In itself came with its own difficulties as well.

“There were so many events going on that it was difficult to keep them properly staffed with Class Council members and chaperones,” Muthakana said. “Speaking of chaperones, during some hours of the night we had far less than the recommended 30, so it was very difficult to cover everything that was needed, like managing food, monitoring activities, and staying at exit points.”

However, Class Council worked hard to prevent and overcome these challenges during the event.

“We just had to get to wherever we were needed as fast as we could,” Muthakana said.

As the event came together, engaged freshmen actively participated in the events.

“Personally, my favorite part of my experience was seeing all the variety of events Lock-In had and different students having a great time in them,” Jordan Lee said. “One was the Escape Room; I was excited to see how students would go about solving it.”

Overall, Lock-In attendees considered the event a memorable experience, and expressed their satisfaction with the event.

“I think lock-in was a really, really good experience,” John Lee said. “[It was] definitely worth the money, and I wouldn’t hesitate to buy tickets again.”