“Avengers Infinity War”: It will put a smile on your face, along with many other emotions 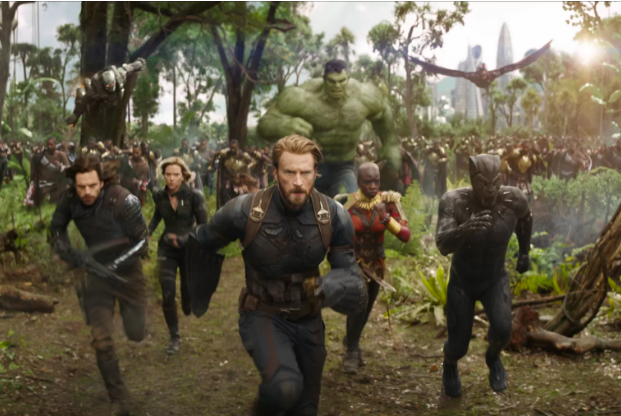 The Marvel Cinematic Universe (MCU) tends to exceed movie-goers’ expectations when it comes to their movies. But the Russo brother’s newest edition to their list of successful movies, “Avengers: Infinity War,” may have gone farther than just exceeding. It played with the audience’s emotions and satisfied the hype that it had received as the most anticipated movie of the year. It contains some of the biggest actors and actresses in Hollywood reliving their roles of superheroes, including Scarlett Johansson, Chris Hemsworth, Benedict Cumberbatch, Chris Pratt, Tom Holland and Mark Ruffalo.

In “Infinity War,” Thanos, the galaxy’s worst villain, is in search for the six infinity stones that he will place on a gauntlet. With the power of all the stones, he can wipe off half of the universe, which is his intended goal. (In case you haven’t watched any of the other Marvel movies, refer to the bottom of the article for a brief guide on the stones.)

The movie picks up after the events of “Thor: Ragnarok,” when Asgard has been destroyed and the citizens go onboard a ship in hopes of a new place to live. They are taken over by Thanos (Josh Brolin) and his Black Order, as he believes one of the infinity stones to be onboard that ship. He ends up getting the stone, but also kills hundreds of people. Fortunately, Thor (Chris Hemsworth) lives, but is flung into space, unconscious.

Back on Earth, the Avengers who had taken part in “Captain America: Civil War” had parted ways and gone about life. Some of the heroes who had not gone MIA included Tony Stark (Robert Downey Jr.) and Peter Parker (Tom Holland). They were living normally and not attracting too much attention to themselves in New York, when Thanos’s space ship, the Q ship, lands there. The heroes spring into action along with Doctor Strange (Benedict Cumberbatch) and the Hulk (Mark Ruffalo). The Black Order comes and kidnaps Doctor Strange in order to get the time stone, and this takes the fight up to space.

Meanwhile, in Scotland where Vision (Paul Bettany) and Scarlet Witch (Elizabeth Olsen) were living in seclusion, they are attacked by two members of the Black Order. The fight is moved to the train station which reveals the characters who had supposedly gone of the grid at the end of “Captain America: Civil War.” These characters include some of the original Avengers such as Captain America (Chris Evans) and Black Widow (Scarlett Johansson), and some of the newest avengers such as Falcon (Anthony Mackie).  After defeating the Black Order members, they go to Wakanda in hopes that the Black Panther (Chadwick Boseman) and Shuri (Letitia Wright) have the resources to safely take out the mind stone in Vision that is powering him to live.

Back in space, an unconscious Thor slams on the window of the Guardians of the Galaxy’s ship, startling them. They take him on board where he suddenly wakes up. He believes that he knows where he can create the Stormbreaker which will kill Thanos. Him, Groot, and Rocket Raccoon leave in an escape pod to Nidavellir, where the weapon is to be made.

The movie was worth the watch because there were many things one would have never expected. The biggest surprise may have been the ending; it was not a cliffhanger, but it was definitely a climax that left people leaving the theater and theorizing how it would pick up in the next Avengers movie that is set to release in 2019.

The storyline of the movie contains aspects of the original three part comic, Infinity Gauntlet, Infinity War, and Infinity Crusade. It does not include the whole thing in order to make the movies unpredictable. Another big positive is the cast. The MCU has been making wonderful movies for over 10 years, all starting with Robert Downey Jr.’s “Iron Man.” With some of the greatest actors and actresses in Hollywood reprising their roles, their acting allowed audience members to laugh, cry, and feel other emotions.

A brief guide on the stones:

Purple
The Orb (a sphere)
First seen: “Guardians of the Galaxy”
Where is it now: With Nova Corps on Xandar

Blue
The Tesseract (a cube)
First seen: With Red Skull in Captain America: The First Avenger
Where is it now: With Loki

Red
The Aether (a thick, red liquid)
First seen: Inside the body of Jane Foster in Thor: The Dark World
Where is it now: With the Collector

Green
The Eye of Agamotto (a green gem in an amulet embossed with an eye)
First seen: In the library of Kamar-Taj in Doctor Strange
Where is it now: Around Doctor Strange’s neck

Yellow
A stone (made from Loki’s Sceptre)
First seen: Loki’s Sceptre in The Avengers
Where is it now: Placed on the forehead of Vision