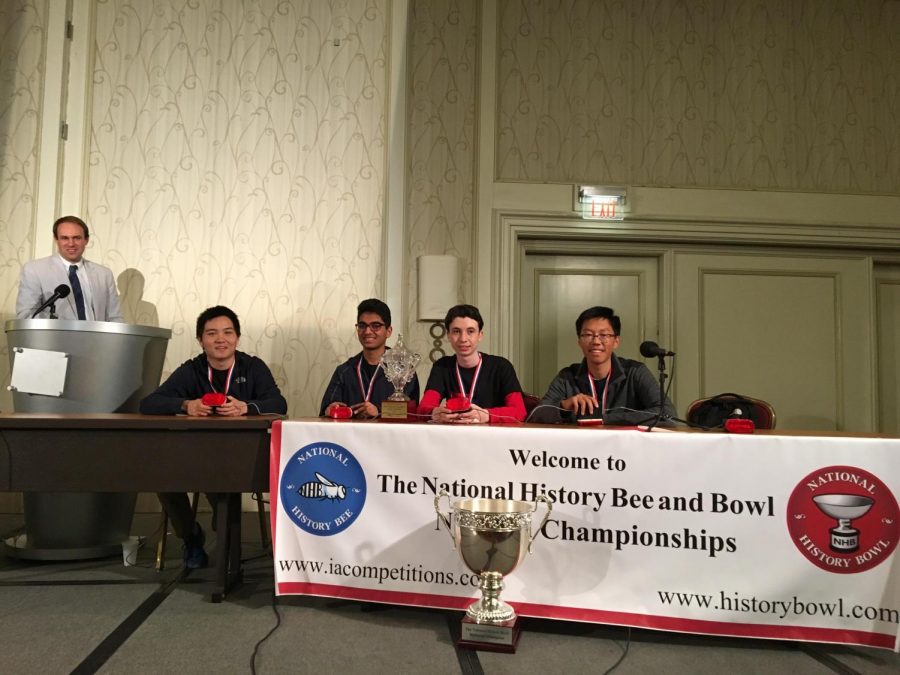 The History Bowl featured teams from across the United States.

“There are 144 teams, all of which had to qualify by placing well in the regional tournaments,” History Bowl team member Fred Zhang said. “And they are among the top students in the nation.”

The competition featured individual events in addition to the team event, focusing on both US history and world history.

“It was pretty similar to a regional competition, but the difference was that there were a lot of teams there,” Zhang said. “The first couple rounds, the prelim rounds, weren’t that bad, and as the tournament progressed, the rounds got harder and harder and the opponents got harder and harder, so it was pretty hard at the end. There  were separate individual events too, one of them was for history, and one of them was for US history.”

The team spent a lot of time studying in preparation for the tournament.

“I was pretty sure that we were the favorites, going into the tournament, but I knew that it was going to be a tough road to the championship, because [although we prepared a lot], the questions got so hard, especially in the later rounds, so there was a lot of randomness,” Zhang said.

“[Individually], I did pretty well,” Zhang said. “I got first in the US History Bee, and I got second in the National History Bee. There’s definitely a lot of luck involved in it, like in one or two questions in a couple of my rounds I could’ve easily made my finish a lot worse. There’s a lot of randomness and I guess a lot of luck went our way.”

“The JV team finished 6th place, which is really good,” History bowl team member William Wang said. “Before the national tournament we were ranked as tenth place, so I think we surprised a lot of people.”

The Jefferson History Bowl team was started four years ago by a group of freshmen, who are now seniors.

“The club’s only been around for only 4 years so I think its amazing [that] we’ve been able to achieve such a large amount of success in a small period of time,” Zhang said. “The seniors, when they were freshmen, were struggling to do small regional tournaments, [so] it’s amazing that they’ve been able to study so hard and now we’re able to win.”

“[We definitely owe it to] our seniors,” Wang said, “Who’ve been here since the club started and they’ve helped this club grow and they’ve grown from nothing to the premier history bowl club in the entire nation, like Rohan Hegde, who’s our captain, my brother, Andrew Wang, and Alex Howe.”