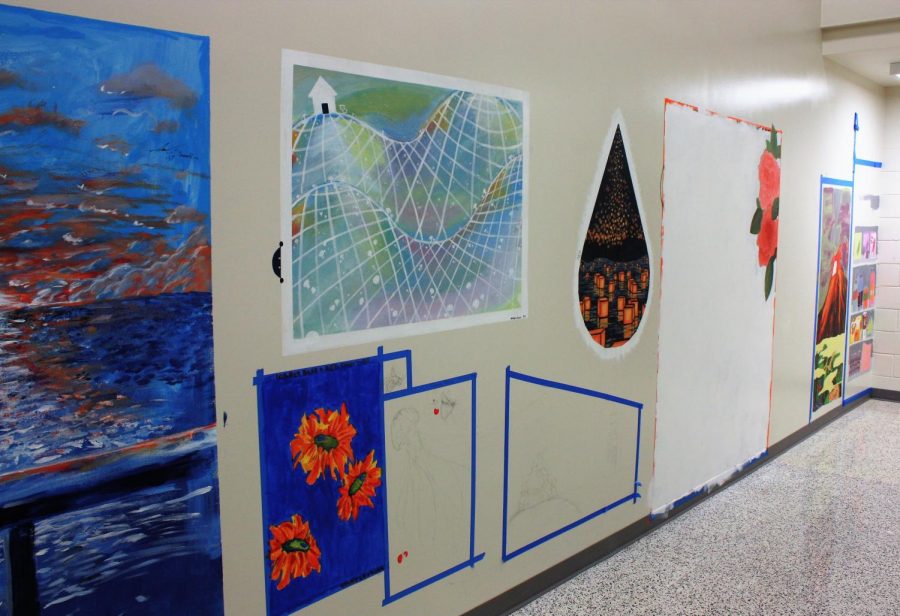 Murals painted by members of Art Honor Society in the stairwell across from the art gallery.

Students and faculty passing through the stairwell across from the art gallery will now be greeted by a pleasant surprise, thanks to the efforts of Jefferson Art Honor Society members. The intricate and colorful murals they painted cover the walls of the stairwell, each one depicting a scene that leaves the viewer with something to contemplate.

“Just before the school was completely done, we talked with Art Honor Society about how we could beautify the school,” Jefferson art teacher and mural project supervisor Tim Davis said. “We talked about drawings and portals, and it seemed to fit into what TJ was all about, so we decided to individually have students create their own portals.”

Apart from that general guideline, however, each artist creating a mural was free to explore and paint what resonated with them personally.

That freedom helps the murals represent the diversity of the school and its students.

“We didn’t want to do murals in the traditional sense that would say ‘TJ! STEM (Science, Technology, Engineering, and Math) school!’ and have a beaker,” junior Brenna Courtney said. “It is an image of what the students here are like outside of STEM studies.”

This idea of diversity played a major role not only in the design of individual murals, but also in the vision for project as a whole.

“One of the goals [of the project] is to bring color to places that might not have color or an abundance of red, white, and blue,” Davis said. “It would be great to have other color combinations in different spaces around TJ.”

From an academic perspective, painting a mural teaches students certain unique skills that can be relevant both within the world of art and beyond.

“By painting a mural, students can learn many skills such as taking something small and making it large; being able to draw and paint big is skill for any artist to learn,” Davis said. “Also, most of the projects are group projects. Learning to create with others is a life lesson.”

Along with learning valuable skills, students who painted murals also appreciate the opportunity to leave behind a legacy.

“I know that if I ever come back to the school, I’ll be able to see my artwork in the stairwell,” senior Mei Baek said. “That will be nice, because it’s something that I made.”

The legacy of the murals also lies in their power to inspire other artists.

“All these paintings really draw you into them, and that’s when I knew that my one goal at TJ would be to get a painting on this wall,” Bagai, who has since painted her own mural in the stairwell, said.

While the niche location of the murals means many students may not get the chance to experience them, some mural artists see that relative anonymity as part of the appeal.

“I think the charm of having it somewhere quiet like a staircase is that there aren’t a lot of people there, so when people do have the opportunity to pass by, they’re like ‘Oh wow,’” freshman Rachel Perry said. “There’s a charm to the quietness.”