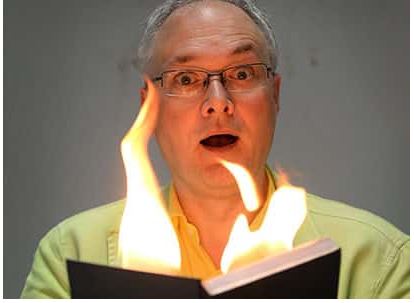 In order to show students the wonders of science, the German Honor Society held a science demonstration on Wednesday, April 11, during eighth period.

“The German Honor Society loves to host an array of activities that appeal to both German and non german enrolled TJ students, German Honor Society officer Kamron Soldozy said. “We wanted to host this event simply because we expected it to be representative of German culture, [and] fun to be a part of.”

The event featured Joachim Hecker, a German scientist who works to spread awareness about science to students around the world.

“Our presenter refers to himself as a German Experimenter,” Soldozy said. “In the truest sense of the term, he works as a full time mad scientist.”

Mr. Hecker presented demonstrations of devices that explored sound and the various modifications that can be made to it before we can hear.

“Herr Hecker taught us about Sound,” Soldozy said. “Specifically, he explored the notion that sound is the combination of our hearing and the vibration of waves throughout our head and skull, which explains why we hear recordings of ourselves differently than we imagine our own voices to be.”

These demonstrations focused especially on hearing sound as it comes from within the skull. One demonstration allowed the presenters to hear the sound emitted when a person speaks, to show what it might sound like inside their head. Another amplified the sounds made when someone eats.

Other demonstrations featured other interesting aspects of math and science, such as how to divide a circle into two perfect halves.

Hecker picked students from the audience to help with his demonstrations. Soldozy believes that this was what the event so rewarding.

“The event was quite interactive, which is what really brought it home,” Soldozy said.