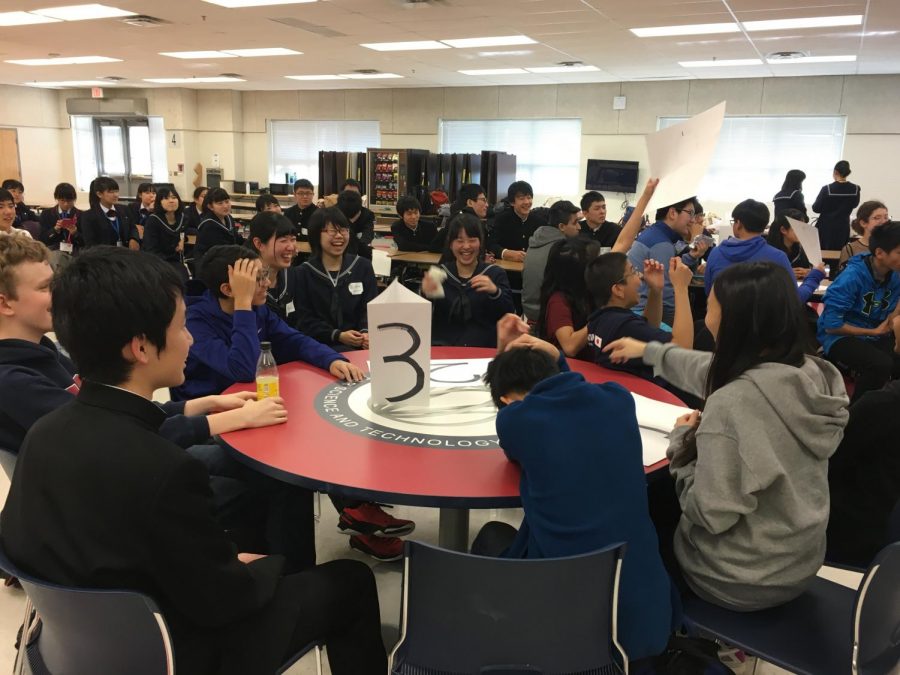 Visiting students from Fujishima High School laugh alongside Jefferson students as they rush to hold up their answer to a question.

In order to learn about American culture, Japanese students from Fujishima High School paid their annual visit on March 16. Throughout the school day they attended classes and interacted with Jefferson students within those classes.

“I took art and chemistry,” Yoshino Ishida, one of the visiting students, said.

Although many of the subjects are similar between Jefferson and Fujishima, she found the teaching style to be different.

“In our school, teachers give us lectures and all the students are quiet. Just writing notes and don’t speak. In TJ high school I was very surprised,” Ishida said, referring to the way students raised their hands and participated in classes. “It’s a very good thing.”

Ishida also enjoyed other aspects of American culture, such as the food.

“I ate some hamburgers and potato salad,” she said. “All of them are so delicious!”

After a day learning about the American culture from Jefferson students, Fujishima students spent eighth period educating students about the Japanese lifestyle.

“They had a presentation about school life, and daily life and interesting things that are different between America and Japan,” freshman Ananya Bagai said. “We had quizzes in between that were very nerve wracking.”

Spirit was high as Jefferson students leaped to answer the questions about Japanese school and culture correctly. There was an occasional dispute on deciding which answer each table would be putting up, though students were quick to settle them.

Accompanying the presentations were popular Japanese snacks, provided by the Japanese students.

Fujishima is also a science and technology school, so some students gave a presentation on some of the research and projects they were conducting.

All of the students involved found the visit to be an interesting and rewarding experience.

“They’re really, really nice,” junior Fiona Carcani said. “And it was good to make friends with them.”