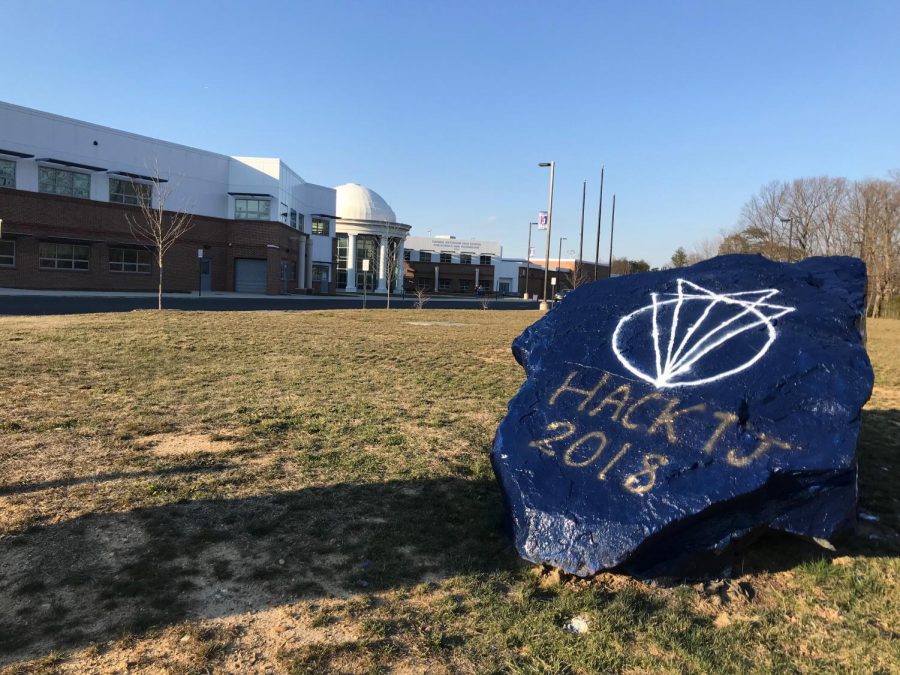 Placed in front of Jefferson, a boulder was painted by Jefferson students, which also included Jefferson's logo, for the HackTJ event.

It is not uncommon to hear many Jefferson students wanting to pursue a career in computer science. With a plethora of computer science courses available ranging from Foundations of Computer Science to Mobile App Development, it is, in fact, impossible to find a Jefferson student who has not been involved with computer science in some way. For junior Samantha Yap, coding plays an important part in her life. Yap practiced her coding skills by coding a program with her team while attending HackTJ, a famed, 24-hour event open to any high school student that was held from March 10 to March 11 in Jefferson’s main gym.

Yap has had some coding experience ever since she took Foundations of Computer Science during her freshman year. Yap also took AP Computer Science and Artificial Intelligence, and she learned Python and Java from these courses. Currently, Yap is learning more about CSS and HTML.

“I really enjoy coding, and it’s something I’m interested in doing as maybe a career or at least picking up valuable skills,” Yap said. “I’m taking the CS [Computer Science] track, so I’m doing the Syslab next year.”

Yap recalled being influenced to continue studying computer science after she was assigned to complete a project on a renowned computer scientist during her freshman year.

“I did a project on Ada Lovelace, and she was a really cool person,” Yap said. “It interested me how she viewed the way coding works. Basically, she related coding to another language, and she was really interested in how they both worked together. I know that in CS in general like there aren’t a lot of girls. I mean at TJ, there are a lot of girls. But in the CS field and in general, you don’t see a lot of women, so when someone tells me I can’t do something, I’m like, ‘Hmm…’”

During her freshman year, Yap decided to attend HackTJ for multiple reasons.

“I attended HackTJ freshman year [to learn more about coding],” Yap said. “I wanted to meet new people. [HackTJ] was pretty well organized. I feel like there were some little bugs like the Wi-Fi was going off, but with big events, that happens all the time.”

When Yap decided to attend HackTJ again this year, she and her team wanted to create a program that tied to current events.

“We’re thinking of doing the marches that are going to take place in our school,” Yap said. “We’re going to find some way to make it easier for people to organize those marches and also for students specifically to share things.”

After completing HackTJ, Yap hoped to expand her knowledge about coding and work collaboratively with her friends.

“I want to learn to do more of the graphical design part because until now, I’ve just taken AI [Artificial Intelligence] courses,” Yap said. “I also want to get to know my friends better. Just spend time with them, have a lot of friends, eat good food.”