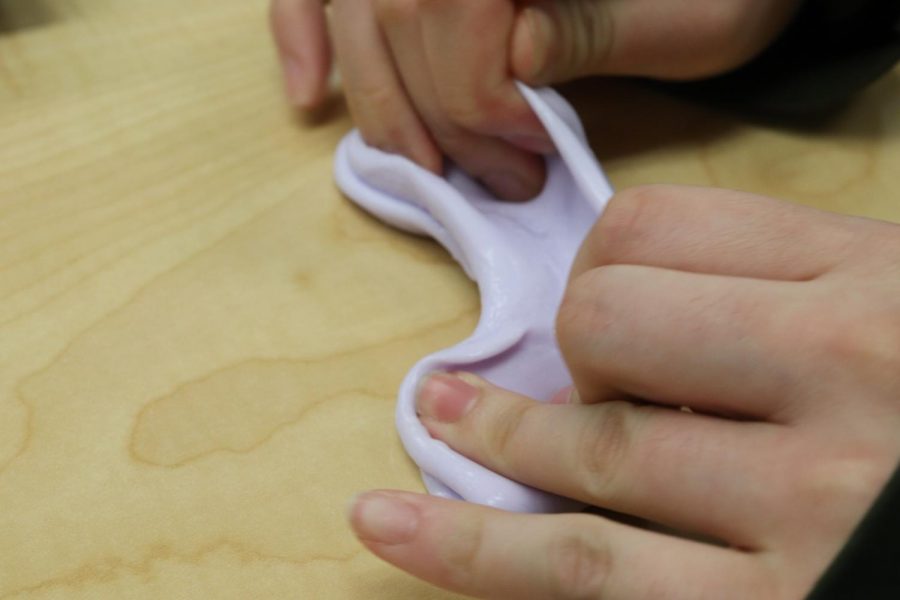 Students gathered in the Auditorium Lobby on Friday, March 16 to make slime as a way to unwind at the end of a busy week. This event, sponsored by TJ SGA and TJ Minds Matter, was originally part of Mental Wellness Week.

“The purpose of us making this event was as a part of our Mental Wellness Week campaign in increasing student awareness for mental illness as a prevalent issue at TJ and [introducing] coping mechanisms for general stressors,” TJ Minds Matter president Ishaan Dey said. “The slime was inspired from last year, when the nurse’s office was handing out small cups of foam stress balls that students could pick up and play with. I remember going after a physics lecture and everyone enjoying having something tactile to play with, so when we were coming up with ideas for stress reduction, this was on the top of our list.”

Students were interested in this event because it provided an opportunity to take part in a fun trend while spending time with their friends.

“I wanted to sign up because I heard that all my friends were here and I think slime is really cool,” freshman Tammy Ding said. “I always watch Instagram videos of people making slime and it’s really satisfying, so I wanted to try it.”

Using household ingredients like cornstarch, Jell-O, and food coloring, students spent the block laughing and chatting with their friends..

“It was really fun to do this with my friends and getting [my] hands messy was also super fun,” freshman Riya Boyapati said.

However, making slime is more than just a satisfying trend. Slime is also an effective stress reliever.

“I recently read an article brief that showed that having tactile, repetitive motions can be soothing for individuals experiencing stress, and has the same neurological effects as a pleasurable activity such as playing a game does, as the same regions of the brain are activated and release dopamine,” Dey said. “Because of that, I think that that it promoted mental wellness because it was an activity that students could do at home when they have some spare time, and is shown both anecdotally and through research to significantly reduce stress, which is something TJ students have to deal with.”

Especially at the end of a stressful week, students found the process of making slime to indeed be relaxing.

“I think that if you’re really stressed and have a lot of work to do, slime can take your mind off of those stressors,” Ding said. “Making the slime helps you forget about your stress.”

Dey believes that even small events such as this can be beneficial to students’ acknowledgement and approach towards their mental health.

“With regards to Mental Wellness Week as a whole, I think that these are steps in the right direction towards changing the school culture in behaviors like how much sleep we get or how we manage stress, because those are critical in order to generally reduce stress before it becomes clinically relevant.” Dey said. “This cannot be the only action–which it isn’t; I’m working with SGA on a lot of policy-related actions– but it does do its duty in starting a conversation in our community.”

Overall, students found the event to be a welcome break from our school’s stressful environment.

“It’s fun to get messy once in a while, especially at TJ where you don’t have a lot of time to just relax,” Boyapati said. “I mean, what’s better than this?”