Author Visit: Jefferson alumnus Arvin Ahmadi discusses his new book Down And Across 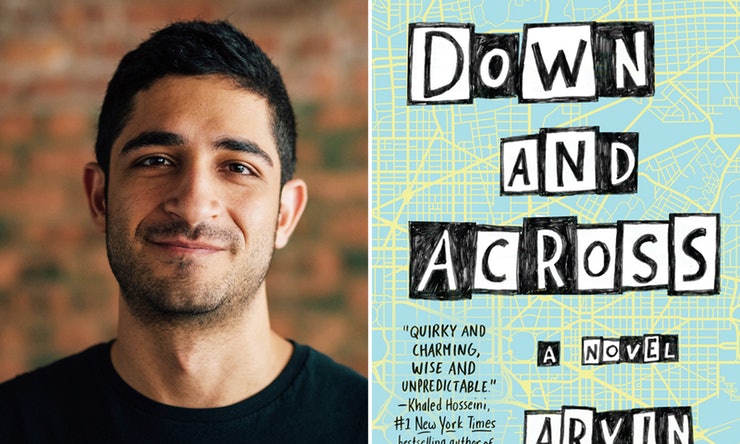 How do you find your passion? And say you find it, what’s to say you change your mind?  And how many times can a person change their mind in a year? In a month? In a day?

Scott Ferdowsi, the main character of Arvin Ahmadi’s book Down and Across, epitomizes this indecisiveness. Looking around him, everyone knows where they’re headed, where they hope to see themselves in 10 years.

And then, the time comes when he has to decide; as the official summary of the book explains:

“With college applications looming, Scott’s parents pressure him to get serious and settle on a career path like engineering or medicine. Desperate for help, he sneaks off to Washington, DC, to seek guidance from a famous professor who specializes in grit, the psychology of success.

He never expects an adventure to unfold out of what was supposed to be a one-day visit. But that’s what Scott gets when he meets Fiora Buchanan, a ballsy college student whose life ambition is to write crossword puzzles. When the bicycle she lends him gets Scott into a high-speed chase, he knows he’s in for the ride of his life.

Soon, Scott finds himself sneaking into bars, attempting to pick up girls at the National Zoo, and even giving the crossword thing a try–all while opening his eyes to fundamental truths about who he is and who he wants to be.”

Interestingly, Ahmadi explains how Down and Across was a telling of his own experience, an Iranian American who grows up and has to figure out his future. Ahmadi conveys, “I just kept trying things…I was your typical TJ overachiever.” He explains how he was always looking for his passion, changing his major about 8 times in college. “I started off as an Econ major, I switched to Sustainable Development, Political Science, Math, History…”

In fact, Down and Across opens with an argument between Scott and his father about Scott’s plan for his future, a personal experience that Ahmadi relates in Down and Across. “You’ve changed your mind so many times, you’ve changed paths so many times, what do you want to do? What do you want in life?” as Ahmadi relates his father’s point of view in their conversation.

And Ahmadi wasn’t sure. It’s not easy to decide what you want to do with the rest of your life. As students, we have the time to explore and figure it out; and if not now, we hope it’ll come to us in college. But if you don’t know the goal, how can you plan the “now”? How can you take the classes and courses that would be beneficial for your future career, and as an overachiever, how can you stay ahead of the curve if you simply don’t know?

This kind of conundrum was complicated with the pressurizing mentality of the “psychology of success,” or grit. Angela Duckworth, a professor at UPenn, explains grit in her Ted Talk and Ahmadi conveys how Scott’s mentor and professor in Down and Across was largely based on Duckworth and her study of grit.

As Duckworth explains in her talk, “Grit is passion and perseverance for very long-term goals. Grit is having stamina. Grit is sticking with your future, day in, day out, not just for the week, not just for the month, but for years, and working really hard to make that future a reality.”

Does that mean, if you don’t have grit, if you don’t know what future you want, the passion you want, are you doomed to fail? Ahmadi explains how he listened to Duckworth’s Ted Talk as a college senior and felt like this was a wake-up call; it made him think, as a not-gritty person, what could he do to succeed? As Ahmadi conveys, “You watch these talks and you’re supposed to feel like you can take on the world, [but] it made me feel terrified. It made me think ‘I am not a gritty person,’ I don’t have this track record of sticking with things, even through failure, even when they get tough…”

At the time, Ahmadi reflected upon two experiences: how he had unsuccessfully run away from home as a TJ junior and how as a 10-year-old, he had attempted to write the story, Jack and Skipper, only finishing about 3 chapters.

Explaining how he thought of his unsuccessful escapade and his incomplete story as failures, Ahmadi decided to accomplish a success: he decided to finish Jack and Skipper, adding in his 16-year-old experience to create a book; but he didn’t write it just to put all the unorganized thoughts down on paper, but to prove to himself that he could be a gritty person.

And as it turns out, this decisive settlement, the determination to do something fully and completely, helped Ahmadi find his passion. “Along the way, I really enjoyed writing. I really enjoyed coming up with these characters, just like scenarios and hijinks and also fleshing out their backstories.”

But the journey to publication wasn’t easy. In fact, Ahmadi explained how he originally just wrote the book for himself, and that it wasn’t meant to be published. But eventually, he published thinking that Scott’s story might help someone else. He signed with a literary agent, and soon afterward got a book deal with publishers Penguin and Random House.