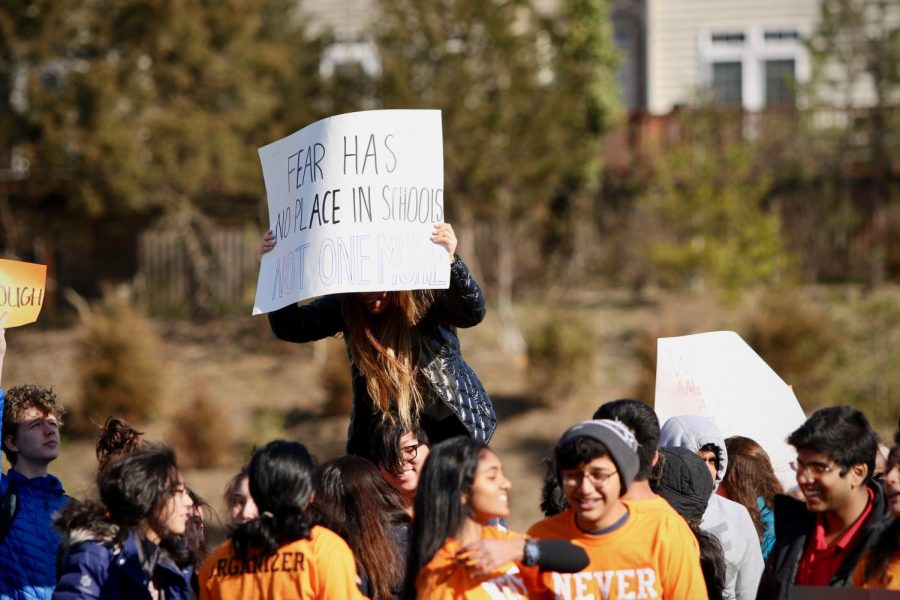 On March 14, over 800 students left class at 10 a.m. to walk up to the stadium. Many brought posters and prepared speeches to make a statement about gun violence in schools.

Walking out of class and up to the football stadium at 10:00 a.m. on March 14th, more than 800 students united to participate in one of the first student protests in Jefferson history.

“[In the] 24 years I’ve been here, there’s never been any walkout or any real protest like that,” history teacher John Struck said. “I don’t think there’s been anything that has impacted high school students’ lives as much as the shooting did in Florida, which rallied a lot of high school kids around the country.”

During the walkout, the students crowded the field as 13 student speakers stood on the bleachers and expressed their views on the tragedy. One of those students, junior Robert Greene, sang “Amazing Grace” and “Will the Circle Be Unbroken” with Olympia Hatzilambrou and Olivia Johansson in remembrance of those who lost their lives in the Parkland school shooting.

“This is an issue I feel really strongly about – it’s terrible that children have to die every day because lawmakers are failing to address loopholes that make it legal for violent criminals and people with serious mental illnesses to obtain semi-automatic weapons,” Greene said. “I wanted to stand up and contribute to this movement that I think could make a significant difference. For years shootings like this have happened, everyone mourns for a few days, and then we promptly forget about it. However, this time, students decided to take a stand; we didn’t want to be the next casualty in a school shooting, and we made our voices heard.”

The walkout was part of a nationwide movement by the Women’s March Network; participating students were instructed to walk out of class for 17 minutes at 10 a.m., one minute for each of the 17 high school students that passed away in the shooting. According to the event campaign’s website, the underlying purpose of the walkout was to “demand Congress pass legislation to keep us safe from gun violence at our schools, on our streets and in our homes and places of worship.”


In this respect, junior Liana Keesing believes that there is a united front among the schools: preventing school shootings bypasses political partisanship and unifying the student body in their desire to save student lives.

“We all have the same goal, and our goal is school safety and making sure that when we’re at our schools, we can go throughout our school day and learn without the threat of being gunned down,” Keesing said. “I think that’s a universal goal and that’s what bringing us together.”

Keesing was an active committee member in the preparations leading up to the event. Doubling as Student Government Association (SGA) Executive Committee member, Keesing was impressed with the level of interest from the student body; people who were not politically active were now coming forward to volunteer their time in planning and staging the event.

SGA itself was pivotal in coordinating the event; numerous members of their leadership corp, including Keesing and president Nick Begotka, held regular meetings with the walkout planning committees and the principal.

“From an SGA standpoint, we are non-political,” Begotka said. “What we really want to do is to show that students in the next generation, who will be voting, want change. And we want it now. That is really the purpose of this walkout. To show that in numbers, we are all walking out of school to protest government inaction in wake of mass shootings such as Columbine, Virginia Tech, and Sandy Hook. And now, Parkland.”

However apolitical the walkout was in principle, though, ensuring the neutrality of it in practice was complicated.

“[Remaining apolitical] is inherently a little difficult because the students who are affected by the Parkland tragedy are, for the most part, advocating for stricter gun control laws, banning AR-15s, and raising the age to 21 to purchase firearms,” Begotka said. “Ultimately, we don’t want to make this feel like a political event because we don’t want to exclude any students from participating. Part of the event is to recognize the victims and I think everyone should participate in that.”

In addition, another complication arose when SGA attempted to file purchase orders for supplies. SGA was allowed to use a school microphone to broadcast speeches at the stadium, but the Finance Office denied purchase orders for poster boards, t-shirts, and wristbands. Because its finance account is tied to the school, SGA could not use funds to provide for a non-sanctioned FCPS event.

“Anything that touches FCPS in terms of money is considered FCPS funds, whether it’s appropriated (allocated by FCPS) or it’s procured through clubs and organizations,” principal Dr. Ann Bonitatibus said. “If there’s an activity or resource that’s tied to an actual FCPS endorsed, sponsored, and approved activity, school funds can be used. A walkout, though, is not an FCPS-approved activity. This stance was affirmed in an FCPS NewsYouChoose bulletin from superintendent Dr. Brabrand. He noted FCPS does not endorse or approve walkouts, so because the event itself is not endorsed or approved, we could not approve the use of school-related funds for it.”

However, the county and the school still found other pathways to support students’ right to protest under the First Amendment. The superintendent, Dr. Scott Braband, clarified guidelines and communicated limitations and freedoms to students, teachers and staff.

“Superintendent Braband communicated to FCPS principals that students have the right to protest as long as it does not disrupt other students’ class time,” Begotka said. “When students silently walk out, the action is non-disruptive. That’s perfectly fine, students have that right. Teachers, administrators, and faculty cannot prevent students from partaking in that.”

In addition, the 6th period SOL, which was originally scheduled for March 14, was rescheduled to Friday, March 16. The school made similar changes to the schedule to prevent potential academic consequences of participating in the walkout, encouraging but not endorsing students’ right to free speech.

“We knew the interruption to class, particularly the March 14 date, could be problematic because it was a red day and we’d already had recent weather-related cancellation on red days,” Bonitatibus said. “Therefore, we decided to take some extra time from lunch and from a class change to put into period 6 to mitigate the potential for substantial imbalance and loss of instruction.”

Nevertheless, there are still some students who faced repercussions because of their participation. For example, computer science teacher Stephen Rose gave out unexcused tardies and 0’s on the daily quiz to those who showed up late to 6th period because of the walkout. Two students from his 6th period class who participated in the walkout confirmed these details, adding that they were also denied the chance to complete test corrections for a previous test when they showed up to class. Their unexcused tardies remain on their attendance record. Another from his 5th period class was not allowed to enter the classroom to retrieve her backpack until lunch. Rose did not respond to requests for comment.

SGA co-sponsor and history teacher Amanda Hurowitz says that accepting the effects of a protest is part of process itself. Civil disobedience, refusing to follow certain laws in protest, treats the ensuing punishment as an integral aspect of the demonstration.

“The whole idea of civil disobedience is that you accept the consequences,” Hurowitz said. “If there were more stringent consequences for some certain teachers, so be it, but I think the majority of teachers wanted you all to be able to participate in a form of protest and were encouraging you to do so even if there were some minor consequences.”

Hurowitz, along with Dr. Bonitatibus, activities director Rusty Hodges, head of security Robert McCormick, assistant activities director David Gardziel, and administrators from other schools, were present at the walk out. However, the county prohibited other teachers from attending the event.

“Teachers were actively told not to go outside, whereas I think teachers as professionals could figure out how to make sure the students who did not want to attend the walk out were supervised,” Hurowitz said. “The [Fairfax] County Guidance was that teachers should be non-partisan and I think the administration interpreted that very narrowly; [teachers] could very easily as professionals be present for the event without showing their support for certain students speakers over others.”

Hurowitz stood toward the side of the stadium throughout the 17 minutes to supervise the event and support protesters if anything came up.

“I was blown away by the presentation,” Hurowitz said. “I thought it hit all of the right tones and I was sad that teachers were not allowed to be there as part of this community-wide event to participate in this meaningful experience.”

The walkout, according to Bonitatibus, was able to maintain the right balance between student protest and school safety and regulation.

“I’m proud of how our students and staff navigated March 14,” Bonitatibus said. “To the best of our ability that day, we maintained the integrity of our instructional program and kept everyone safe. No doubt, balancing rights, responsibilities and outcomes can be a tricky part of democracy, but we would never want to relinquish the freedoms we enjoy as a country.”