From the French university setting to the Jefferson lab tables, Dr. Ashley Jones explores the boundaries of her comfort zone in her direction of becoming a chemistry teacher. 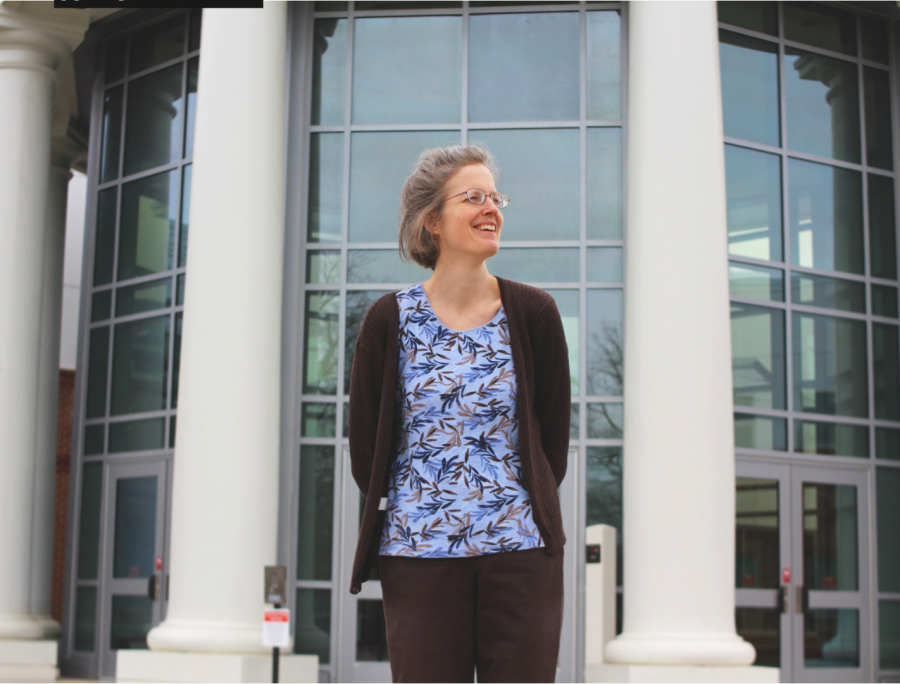 From the graduating class of 1991 to her 14 years as a Chemistry teacher, Ashley Jones marks her 18th year at TJ this year. In her role as a mentor in guiding students across academic challenges, Jones has formed her own philosophy that focuses on assisting others toward their goals. "Success is linked to helping other people feel valued and empowered and like they're moving toward their goals. I think those were the reasons why teaching appealed to me," Jones said. "A lot of people in my life have done that for me, both family members and formers teachers. I don't think any one of us has reached the summit that we could reach at any given time; this is a continuous journey where you figure out what your weaknesses are and what your strength are and hop to build on that the strengths and manage the areas in which you are weak."

Hitting two green plastic pears together in a colliding motion, Ashley Jones holds the attention of her chemistry students as she demonstrates how electron pairs repel. As Jones moves her arms in broad gestures and speaks in a commanding voice, she can’t help but think back to an earlier time in her life when it wasn’t always so easy to for her project her thoughts and ideas. In fact, she characterizes herself as an introvert who has overcome her inhibitions during her transition to teaching.

Jones was a freshman at Jefferson during the school’s third year open.

“I came to TJ when the school was in its third year and brand new,” Jones said. “I thought that TJ would be a place to get a strong academic foundation, … but I had not had the type of exposure to or love for science that a lot of students here have.”

Enrolled in the 1991 graduating class of Jefferson, Jones experienced the first full exposure to scientific and technological interests, finding a new passion for biology and chemistry.

“I ended up really liking biology as a freshmen, which set me on the road to chemistry,” Jones said. “Chemistry to me is a beautiful marriage between the qualitative and the quantitative. There was just so much logic in it. You can describe in a qualitative way how chemicals reacted but also say quantitatively that moles of a and b get moles of c. I found that really intriguing.”

While she strived forward in her interest in chemistry, she was unable to articulate her ideas and thoughts due to her shyness.

“I was painfully shy,” Jones said. “I was scared as a young person of giving oral presentations and was not the type of individual to raise her hand in class or just volunteer. Teachers would have to draw things out of me. I came across as somebody who was interested but strikingly introverted.”

Jones’ love of chemistry outweighed her introversion as a student. She thrived in understanding complex concepts that she could share with others, and began to lean her career pathway towards becoming a teacher.

“Teaching is a venue where I can learn more chemistry which I personally enjoy, but larger than that, it’s an opportunity to try to enthuse students about a subject and about learning as an endeavor,” Jones said.

Out of Her Comfort Zone

Seeking a major in chemistry and a minor in mathematics, Jones forged her way from TJ to William and Mary toward an educational path. During her final year of undergraduate school, she made the decision to study abroad in France for a year.

“Learning a language [was an] academic challenge which appealed to me. Living abroad and attending university would take me out of my comfort zone in a sense that was difficult for me,” Jones said.

After heading off to France in 1995, she attended university courses in an audit situation. Everyday life forced her to function in an environment where total comfort was impossible.

“Being shy but then put on the spot, there was no way that you could to get through these situations without being vulnerable. It builds your confidence when you see that you have not often even done these things in your first language and now you’re having to manage in another language and context,” Jones said.

During her time in France, Jones developed confidence and assertiveness– not only in the classroom setting, but also within her character-developing process.

“Every experience that a teacher has outside of what he or she is presenting in class has the ability to impact how the person delivers stylistically,” Jones said.

New Perspective as a New Teacher

Jones took the lessons she learned in France to Cornell, where she graduated with a degree in Chemistry and made her way back to Jefferson in 2004 to pursue her teaching career in the place that had once initiated her love of learning.

“I was attracted to teaching at TJ by the notion of how motivated the students are,” Jones said. “People who are alumni here have a poignant appreciation for what the students are facing because we faced that too.”

Jones’ position as a teacher varied vastly from her previous role as a student. After years of amassing a depth of knowledge regarding her subject, Jones sought to bring out the passion in students who reflect her own reserve as a student.

“I’m often so touched to see students who remind me of my younger self– naturally quiet, but responsive if you seek them out,” Jones said. “I feel like seeking people out is not a comfortable role for me but advisers did that for me when they were my mentors and that’s part of what I see myself attempting.”

In the same way, she hopes to challenge students in their academic endeavors that ultimately lead to development of self-reliance and resilience in a subject.

“Students here are increasingly facing aspects of discomfort when they hit walls they hadn’t encountered before,” she said. “You’re going to hit a wall at some point. There’s something within you that can be developed through internal struggle. It’s not always comfortable but ultimately it informs the way that you manage your life.”

In placing an academic challenge in front of her students, Jones reflects on the how her role as a teacher has influenced her former introvert toward the dynamic, energetic teacher she is now.

“Teaching as a career has caused me to become less introverted,” Jones said. “Teaching is fundamentally a human endeavor, no matter what you are teaching. Teaching to me is an enriching context in which to relate to people and see them as humans and hopefully have them see me as human.”