Ending the season with a big splash 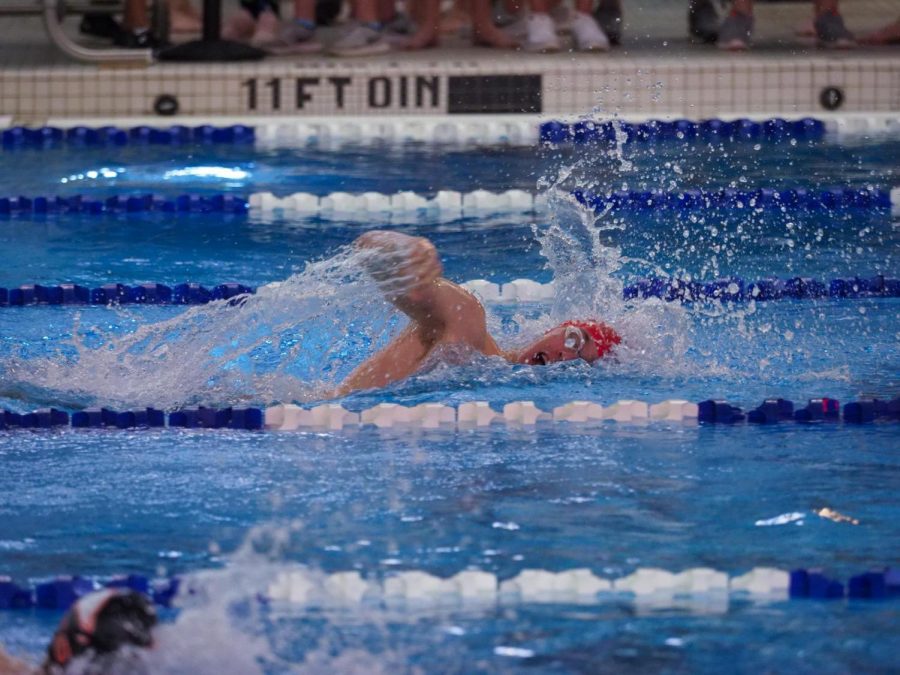 Johnathan Pollock speeds through the water at the swim states in GMU on Friday , Feb.16.

“On your mark, get set … ” and immediately, a loud buzz fills the spacious, airy room of the George Mason University (GMU) Aquatics Center. State-qualified swimmers take a deep breath and take off from the block. As soon as their fingertips come into contact with the water’s surface, the swimmers brace themselves to execute a smooth glide and speed through the water.

The varsity swim team recently competed at the Virginia High School League (VHSL) state level swim meet on Feb. 16 at GMU. High schools from all over Virginia assembled their best swimmers, from which the boys’ team won first place.

GMU hosted swimmers from all around the state during the swim meet.

“There were at least 20 other schools from all around Virginia. They organize it by the size of the school. We are 5A, which is the second highest and 6A is the biggest,” freshman Natalie Martin said. “One of our biggest competitors was Briar Woods [High School].”

Martin recalls feeling nervous during the time leading up to the meet.

“It was kind of nerve racking since it was my first states, and everyone thought that we could win and there was kinda a lot of pressure to swim really fast do really well,” Martin said.

To prepare for the state meet, junior David DiMeglio focused on specific skills and events to improve his speed and endurance.

“I went to practice as usual and did some sets to get me ready and some more high-volume sprint work, but also some distance work, since I was swimming a 500,” DiMeglio said.

Subsequently, in the week prior to states, the team was sure to reduce the intensity of practices in order to muster their energy for the big day.

“We all went to practices and the week before we all took it a bit easier than normal just so we could rest up and get our energy”, Senior swim captain Militsa Sotirova said, “We still had practice, but we tapered, which means that we did easier sets during practices.”

Despite the boys’ victory at the meet, people around them were initially skeptical of the outcome of the competition.

“Before the meet, some people on the team doubted us. We were supposed to have a lot of people at prelims and states, but I don’t think everyone on the team felt that we would do as well as we did, so some of us decided to stay back,” sophomore Jeffrey Gerber said.

From the beginning, the boys were already rising to the top ranks.

Initially, the boys’ team earned many points from the relays, which boosted their ranks. On top of that, they improved their speeds on a larger scale than ever before.

“During the meet, a lot of us dropped the most time we did in several years,” Gerber said. “In the 50 free, we had people in 23rd, 24th, and 28th place. But we finished with three people on the top 16, so that was a lot of points on the board.”

In swim practices, the boys team set a base goal to fall back from winning by a set number of points. The boys ended up exceeding their expectations and claiming the position at the top.

“Going into the meet, we weren’t supposed to win, we were supposed to lose by 65 or 70 points,” Gerber said. “There was a feeling like we had to do something about it since for most of the seniors, it was going to be the best year in a long time.”

Although the boys won first place at the swim states, swimmer DiMeglio thinks he could’ve achieved a better time, when thinking about the meet in retrospect.

“I wasn’t too happy with the way I swam the 500, I could’ve been faster”, DiMeglio said. “I could’ve done a better job with cooling down and warming up, since I had a 50 free before, so it was a tough double.”

Looking back at the whole competition, however, the overall experience was enjoyable and satisfying for the swimmers that competed.

“It was great and super fun especially during the relays and individual events,” Sotirova said. “We were cheering together as a team and it was a lot of fun to get the pep and the energy.”

DiMeglio expresses his contentment in regards to the boys’ victory of winning first place at the states swim meet.

“I was so happy, it was like a dream come true and I was pretty emotional with a few tears. I thought about the seniors that we made so proud that would be leaving next year,” DiMeglio said.