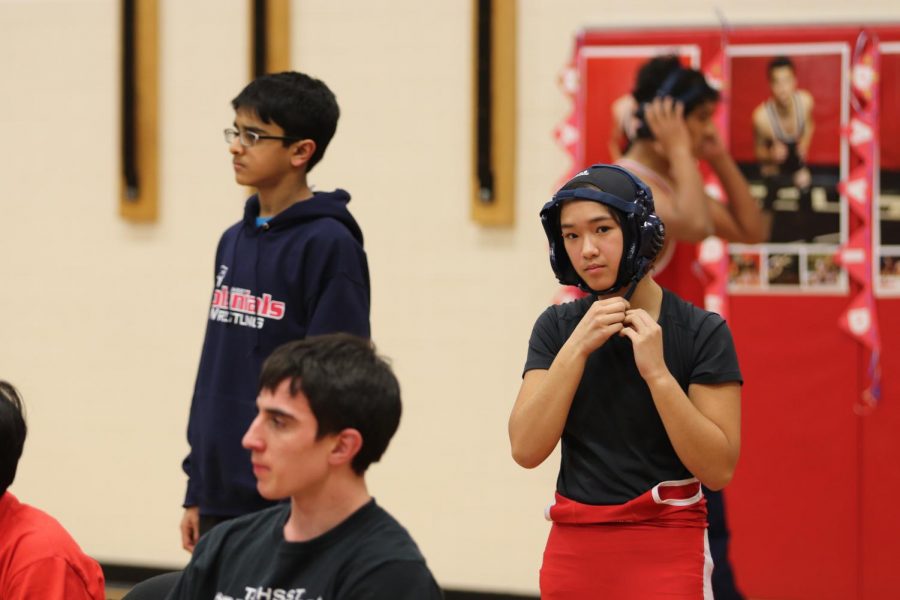 In preparation for her upcoming match, freshman Brianna Ta puts on her ear guard. Despite being only one of two girls on Jefferson’s varsity wrestling team and much smaller than many of her opponents, Ta placed third in National Districts and qualified for regionals. “People are usually amazed [when they find out I do wrestling and jiu-jitsu]. My friends, actually, call me ‘Tata Buff’, and on the wrestling team, my nickname is ‘Warrior Princess’,” Ta said.

Crowds of proud parents, enthusiastic students, and eager teammates await in anticipation for the next match of the Senior Night wrestling tournament to begin. Among the line of beefy male varsity wrestlers sitting on each side of the mat is a small, thin girl doing push ups to calm her nerves. Freshman Brianna Ta walks up to the center of the mat and faces her opponent: a tall, male wrestler who towers over her petite frame. Despite being a head shorter than her opponent, Ta is just as likely to win her match. Taking a deep breath, she clears her head and gets into position, ready for her match to finally begin.

Ta is the only freshman girl currently on Jefferson’s varsity wrestling team. With a strong background in jiu-jitsu, she was prepared to take on another high-contact sport, hoping to make new friends and improve her self-defense skills. However, joining a male-dominated sport without knowing anybody else on the team turned out to be a daunting task.

“I was very nervous, and it was kind of hard in the beginning because I didn’t know anybody at all, not even the other freshmen,” Ta said.

Out of a total of 32 wrestlers, there are only two girls on the team. This staggering difference is only a small snapshot of the male dominance displayed in high-contact, self-defense sports at both the amateur and professional levels. As the minority on the team, Ta first developed a close friendship with senior Maya Parker, the only other girl there. Empathizing with Ta’s struggles, Parker helped her grow accustomed to the overwhelming group of unfamiliar male faces.

“I think it’s definitely tough, even for freshmen, to join a sport like wrestling, just because all of the grade levels are together and it’s a very high-contact, physical sport,” Parker said. “To be a girl on top of that is really tough, and so that’s why I’m kind of glad I was there because it was sort of like a big-little sister relationship. Because I was a senior and sort of already knew some of the people that were there, I was sort of able to help her integrate into the team.”

Although the other male wrestlers initially regarded Ta with apprehension, they gradually accepted her as simply a fellow wrestler rather than a female one.

“I think [the other guys] didn’t really know how to act around me at first,” Ta said. “Like for Coach Phillips, he would sort of make jokes about how I’m a girl and how he can’t curse in front of me and stuff. He would close my ears and be like, ‘Okay, now I can say it.’ They also didn’t really drill with me except for people more like my size, like Varun, another freshman, but eventually they just got used to me, like I was like their sister.”

Because of the relative lack of female wrestlers at tournaments, Ta often found herself in matches against much stronger male opponents.

“Guys have muscle and stuff so in matches it’s harder to use strength to beat them, and I have to be quick and fast and use technique,” Ta said. “I think [male wrestlers] might underestimate me because I’m smaller and a girl, so I don’t have as much strength, but I do have the conditioning from Mr. Phillips and experience with jiu-jitsu.”

These differences in size and strength between male and female wrestlers create the assumption that female wrestlers are the underdogs at wrestling tournaments and contribute to the consistent lack of females at competitions.

“There definitely is stigma associated with [girls participating in male-dominant sports like wrestling],” Parker said. “I even notice like in meets, there was this one time where this one lady saw that her son was about to go against this girl, and she got super worried. When the match finished, her son won, and she was so relieved. She just could not have her son lose to a girl. There’s definitely a different dynamic when girls wrestle boys, and there shouldn’t be because it’s just one wrestler going against another.”

Placing third in National Districts and qualifying for regionals, Ta has overcome the many challenges of joining a male-dominated sports team of complete strangers in only her first year at Jefferson.

“I think [this first season] has gone really well actually,” Ta said. “I’m really surprised I made varsity. I think I’ve won a decent number of matches, and I’m actually quite surprised, but I think that jiu-jitsu has helped me, and hopefully I can continue making progress in the future.”