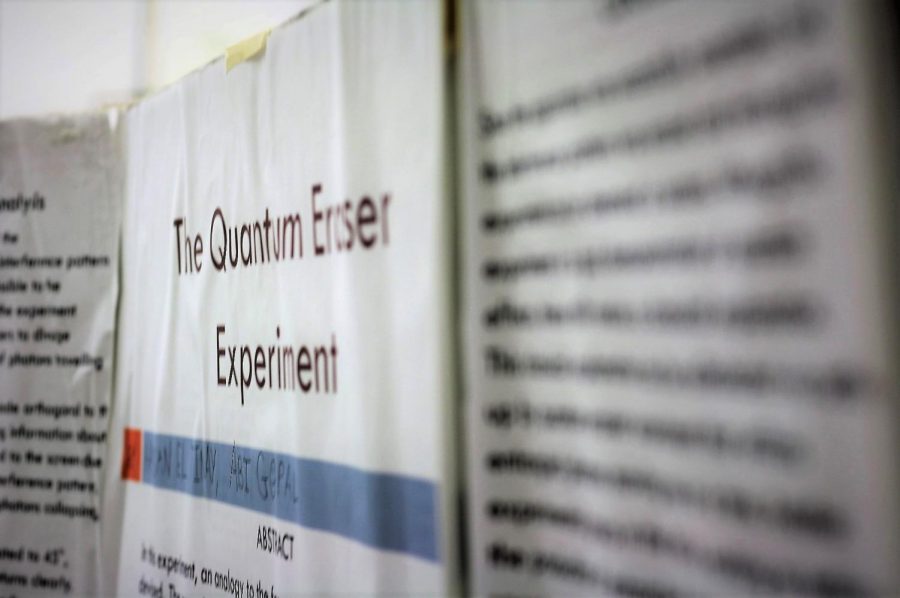 The poster for a senior research project conducted in the Quantum Physics & Optics lab. Frontiers in Science aims to discuss projects like this one in its exploration of the newest cutting-edge research in computational science.

Q: Provide a general overview of Frontiers in Science and what it does.
A: We discuss new scientific topics and new discoveries. We plan to invite guest speakers to visit and present student research, like senior research projects or research done over the summer at internships.

Q: Is there a specific scientific discipline the club focuses on?
A: [The club] is mainly math, physics, and computer science-based; more computational.

Q: There are numerous science-based clubs at TJ. What makes Frontiers in Science different?
A: Unlike other clubs that focus on very specific academic competitions, like math team, chemistry team, or physics team, [Frontiers in Science] is more [about] within the field what researchers are currently working on. Right now, students don’t have access to this; they don’t know about the cutting-edge research that researchers have done.

Q: What happened at your first meeting?
A: We discussed the plan. We watched videos of a new math-related research project by one of the students in our lab, Franklyn Wang. We watched one of his videos and discussed what our club wants to do. It was mainly for organization purposes.

Q: Talk about the importance of having Dr. Luo, an advanced physics teacher and research lab mentor, as the club sponsor.
A: She works with a lot of other researchers outside of school. She’s a part-time teacher here, so she has a lot of connections to other people and can easily communicate with guest speakers and make seminars happen.

Q: As a current senior, you won’t be able to continue with the club into next year. Does it feel like you’re leaving behind a legacy?
A: I’m hoping to leave behind a legacy. At the first meeting, we got a lot of underclassmen coming, and maybe in the future we could expand the size to get even more people to attend. Next year, this club can continue to grow. That’s our plan.