One Hundred and Thirteen Students Participate in the Science Fair 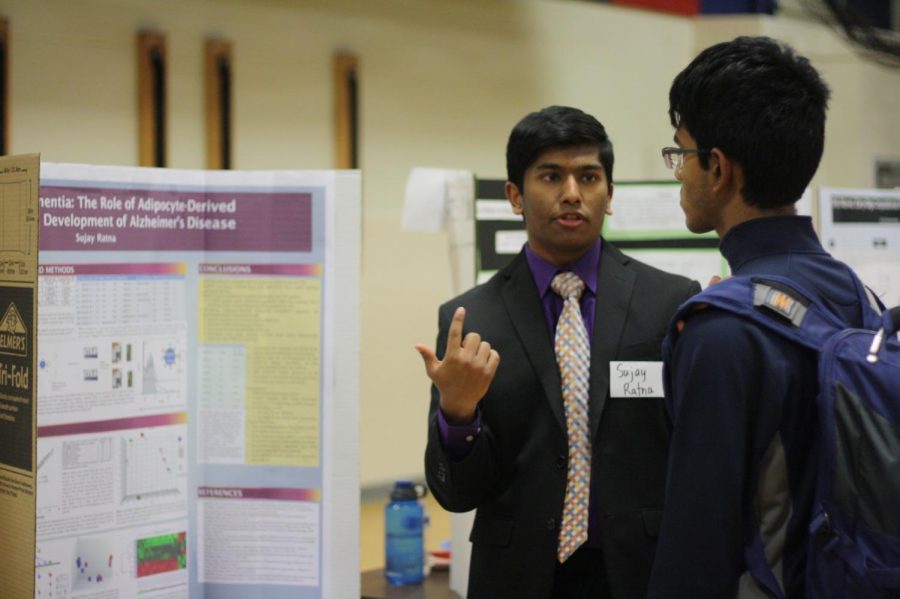 Pointing to his poster, senior Sujay Ratna presents his research to a student. Ratna's project won in the category of Cell and Molecular Biology.

In order to allow students to show their research to judges, Jefferson hosted a science fair for students on Jan. 31 during eighth period and after school.

Student projects were judged by parents and professionals, who listened to presentations of a student’s research, and asked questions about the project.

Judging began at 4:15. While some students finished being judged rather quickly, others had to wait a few hours.

“I was the second-to-last person to leave,” senior Sujay Ratna said. “I was the fourth person in my category, and my category had to stay the longest. I think it was just a lack of judges; it wasn’t anyone’s fault. We were just unlucky that cell biology was the third of three or four categories. The judges had to go to different categories, and we ended up staying until eight.”

When not being judged, students reviewed their projects, looked at other projects, and socialized with their peers.

“I was just looking over my poster and reviewing my paper, making sure I could field any questions they could throw at me for the first hour or so,” Ratna said. “Once I got the grip of that, I was talking to other people, looking at their posters, figuring out what other research at [Jefferson] goes on. Some people were doing homework, talking to friends, socializing. It’s a good time. It’s just a different community of people doing research and presenting.”

While students did review their research, much of their knowledge came as a result of long periods of time working on their projects.

“The presentation is really how well you know your project,” sophomore Arnav Bansal said. “I’ve worked on my project for eight months, so I already knew the ins and the outs and every part along the way, and then a lot of the current literature and research in the field. That helped me answer questions.”

Student researchers found the fair to be useful for their future research.

“I liked the experience a lot, and I think in general it is a rewarding experience,” Bansal said, “because you just gain so many skills from the process, the researching, the presenting, the writing, the design of the poster.”

Winners of the various categories in the science fair, as well as Siemens semifinalists and a few alternates, move on to regionals.