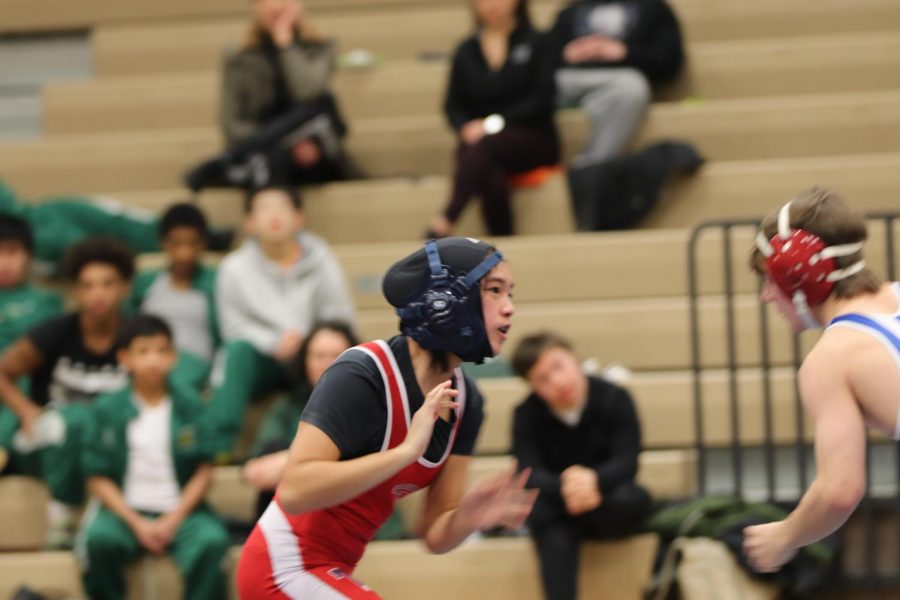 Ta faces an opponent from TC Williams during an earlier match on Jan. 31.

12 Jefferson wrestlers competed in the National District Championship. From there, 11 qualified for regionals, the highest number that Jefferson will send. Held at JEB Stuart High School over nearly 12 hours on Feb. 3, the tournament also ended with Jefferson in third place among the seven schools that competed.

During the tournament, wrestlers among 14 classes were placed in brackets, where they played against seven other people from the other schools. By the end of the meet, they were ranked among their weight class, in addition to an overall point score awarded to each school. Wrestlers who made the top three in their weight classes then would move onto regionals. However, some who made fourth or fifth place were also able to qualify, because opposing wrestlers were from Marshall and JEB Stuart, which are not in the region Jefferson and the other five schools would compete in.

“Now we just beat that [record of 10 wrestlers sent to regionals] by 1, so that was pretty good.” Freshman Brianna Ta said. “The only person that didn’t qualify got injured, but almost everybody made it.”

The results, with two Jefferson wrestlers in first place and five wrestlers in the top three for their weight classes, was a change from last year’s district championship, where Jefferson came in second to last place.

“It’s kind of nice to see the team get better, last year there wasn’t really that many students in the team,” senior Owen Barnett said. “I think [what helped] was just having more experienced people, and having more people on the team.”

In the past few years, the wrestling team has had less members, and Jefferson was unable to compete in as many weight classes. As a result, their total point score at the district championship were lower, and there was a smaller chance of sending many wrestlers to regionals.

“This year as a team we had a lot of more of the weight classes filled up than we’ve had in the past, so it really boosted our chances as a team to go further in districts,” junior Gregory Harrison said. “When you don’t have a weight class filled, you just lose points.”

The increase in the wrestling team’s membership this year meant that there were a number of newcomers to the sport. Two such wrestlers, Harrison and freshman Brianna Ta had not wrestled before this season, but both, in their respective weight classes, were in third place by the tournament’s conclusion.

“It was hard [at first] because I didn’t know a lot about the sport, the rules and stuff, but the coaches and other wrestlers taught me,” Ta said. “In the beginning I was on JV [junior varsity] and I didn’t really think that I would make varsity, but they didn’t have a lot of people in my weight class so I got bumped up, and I had to work a lot harder and prep for meets more.”

The Region 5C Championship will be held on Feb. 10. With the amount of Jefferson wrestlers to compete, Barnett hopes for team members to qualify for the state championships from there.

“It’s going to be fun this year,” Barnett said. “We haven’t had anyone get to states for the last couple of years [but we have a chance].”

@cab_tj TJ Wrestling we brought 12 to Districts and 11 is going to regionals pic.twitter.com/QbvzQ755PS