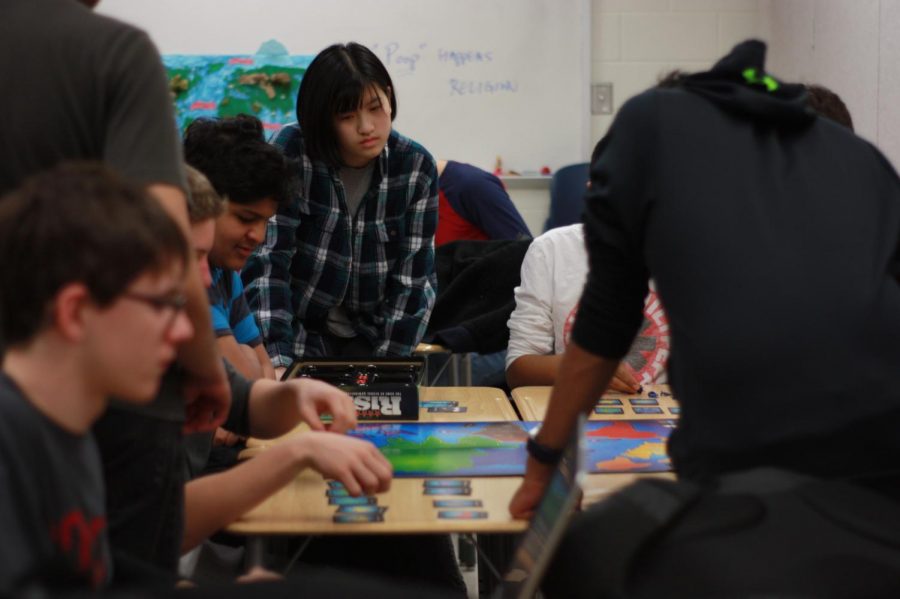 Historical Gaming Club members play a game of Risk, a historical strategy board game. The club had its third meeting on Wednesday, Jan. 3.

Combining old-fashioned board games with digital games, Historical Gaming Club has opened to teach history through gaming. The club had its first meeting on Dec. 6, 2017.

The club currently plays two games, Risk and Civilization V. Risk is a strategy board game made for two to six players. Players attempt to capture territories from others, making and dissolving alliances along the way. Civilization V is the fifth edition of the Civilization game series, in which players develop a civilization from prehistoric times by exploring and expanding. The game is largely based on skill and experience rather than luck.

“Civ[ilization] 5 is actually a really detailed game so you can learn a lot from it without realizing that you’re actually learning it, so I think it’s a lot more fun for kids than reading a textbook or whatever which is the standard way of doing it,” club president Palak Jariwala said. “There’s actually a lot you can learn from it and get interested in history.”

World History teacher Haywon Yi proposed the club to her students based on a Washington State University study on the use of video games as educational tools. Historical games such as Civilization, Rise of Nations, and Age of Empires have been found to be particularly useful in the classroom, highlighting geographical and environmental factors often neglected in classroom history lessons.

“I’ve learned much about important historical cities and nations as well as their leaders. I’ve also learned how historical warfare and diplomacy shaped the world,” junior and club member Walker Haynes said.

The club provides the opportunity for students to play against peers, and students with prior experience help instruct new players.

“I have [played] a couple hundred hours with games by Paradox Gaming, a company that makes grand strategy games from different time periods in history and the Civilization series,” Haynes said. “It’s really enjoyable to play with other people [in the club] because they are less predictable than the A[rtificial] I[ntelligence]. Also, it’s fun to help those who are less experienced.”

In the midst of largely science and technology based eighth period clubs, Historical Gaming Club offers a change of pace.

“I think that it’s a necessary balancer for the STEM related clubs. On a broader note, this school needs to be more well rounded even though it is a STEM focused school because science and technology are useless for humanity without knowledge of the context in which we should apply them,” Haynes said.