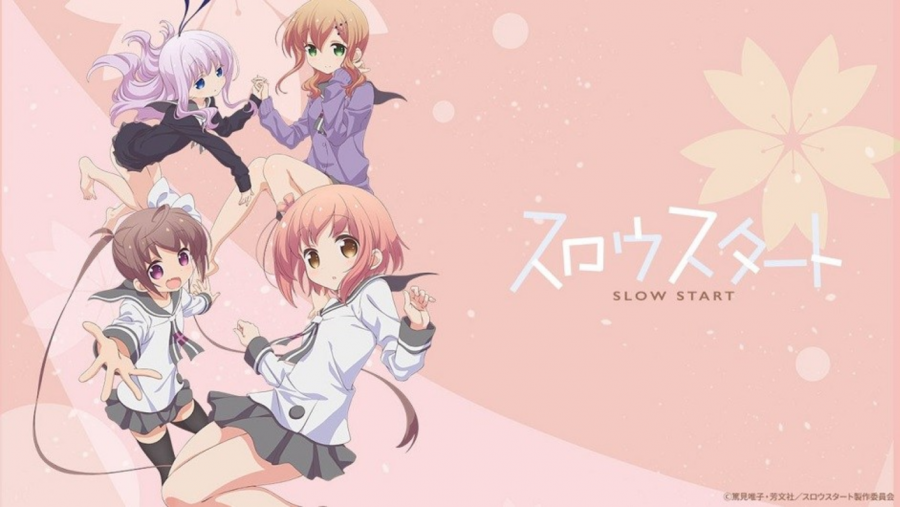 Every season there are animes of cute characters doing cute things, and this season is different only in the way that there are a lot more animes in that style. While great for slice-of-life fans, this means that there is more competition than ever for the works themselves. With such a large crop, there is bound to be good and bad apples, and now that we’re a fourth of the way through the season, I am sharing my views on a selection.
A Place Further than the Universe – Highlight
At first, I thought a show about high school girls going to the South Pole seemed too ridiculous to work, the writers forcing the gimmick a step too far. But as you’d expect from Atsuko Ishizuka (a director of No Game No Life) and Studio Madhouse, it’s astoundingly good. In fact, it reminded me of last year’s Made in Abyss’s opening episode in how exquisite the lush animation was when blended with the photo-realistic background art. What is most effective, though, is the endearing and achingly heartwarming script. Instead of piling on a series of contrivances to get its cast out and improbably exploring the frozen wasteland of Antarctica, A Place Further Than the Universe ends up taking its time to tell a coming-of-age story that is precisely about the joy and fear that comes with chasing a dream that snarky cynicists like me will write off as an impossibility. The main characters are going to Antarctica and neither they nor the show is treating that daunting goal lightly, with the episodes is focused on exploring their character traits in-depth and how they affect their personalities and desires instead of as silly quirks to set up tepid jokes. Overall, this series looks like it has significant promise.
Ms. Koizumi Loves Ramen Noodles – Not
When I first heard about this show, I thought it’d be better off as a short than a full length series. And unfortunately, I was right. The plot is basically non-existent and appears far more suited to five minute segments than full episodes. We’re introduced to Yuu Ohsawa, a girl with a major crush on transfer student Aizawa, but no clear way of acting on that crush. Aizawa never willingly talks to anyone, and so it’s only when Yuu coincidentally runs into her at a ramen stop after school that they “meaningfully connect”. Ms. Koizumi Loves Ramen Noodles has two unlikable leads and a paper-thin plot, but it does have a strange appeal. The show is a mix of food porn, fanservice, and ramen trivia, and it scrapes by in all three of those categories. Outside of those three appeals, there’s not anything here. Ms. Aizawa lacks ongoing narrative and character chemistry, as well as the atmosphere and effective comedy of a show like Dagashi Kashi.
Slow Start – Not
In many of the shows that I’ve seen, a “cute-girls-doing-cute-things” slice-of-life show will have some sort of gimmick or storytelling quirk in order to set it apart from other members of this fairly crowded genre. This season we have “cute girls traveling to the Antarctic”. Last year we had “cute girls working on video games”. While there is technically something unique in the way protagonist Hana is behind in her schooling by about a year (hence the title), it has practically no effect on how the show plays out. What remains is an story that lacks any real substance, a slice-of-life series that is sorely lacking in the “life” department. I prefer my slice-of-life to have a little more real life involved. Hana and her friends are perfectly nice girls, but “nice” ≠ “interesting” and the conversations that’s the majority of the show is like eavesdropping on the conversations of random strangers on the street: every now and then you might catch a snatch of something funny or engaging, but it’s noise that fades into the background. The art style, cast personalities, and dialogue are too unappealing for me to tolerate for 10 minutes, much less 25; Slow Start may very well have the most unfortunately apt title of any anime this season.
Mitsuboshi Colors – Highlight
Now this is a cute girls show I can get behind! Mitsuboshi Colors understands the joys of childhood games, recapturing childhood make believe stories where a group of friends are all dedicated to keeping up the game by completely suspending their disbelief – at least until you have to go back home for the evening. Admittedly, this episode didn’t immediately resonate with me, seeming to just be another low-stakes cutesy show of silly girls running around their neighborhood. While it is that, its inspired script really pulls the show up from the rest of the soft, slice-of-life pack. The show nails the unique wonderment of being a kid in a cozy local neighborhood. The main characters have an infectious enthusiasm for adventure and their interactions with the various shops and characters of their home imbues the series with a rewarding sense of place. It successfully worked to evoke the lazy happiness of wasting days being a little delinquent, creating a tone reminiscent of classics like Calvin & Hobbes. Mitsuboshi Colors is one of those shows where you may well find yourself liking the series despite yourself, no matter what your usual tastes are. It’s just that charming.