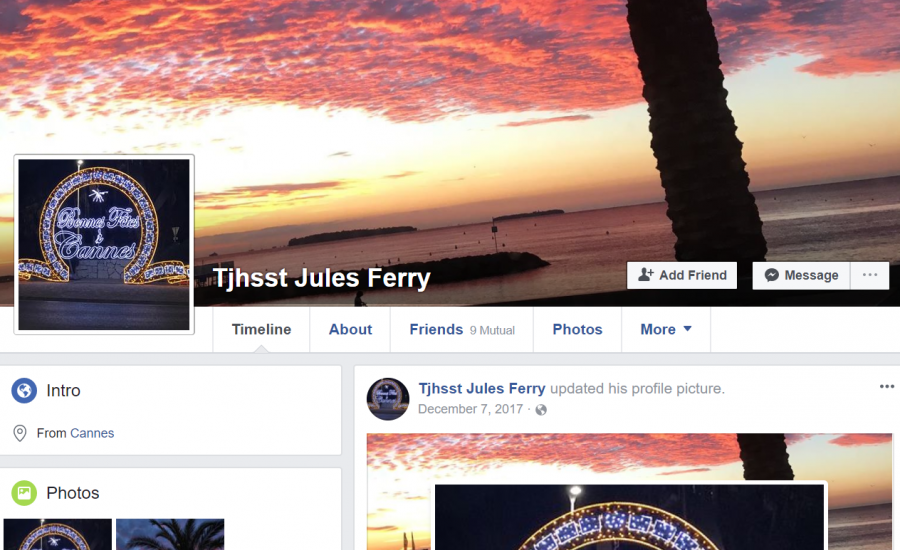 For the past few months, the Jefferson French department has been participating in an online exchange program with Jules Ferry, a school located in Cannes, France. The exchange is mediated through a shared Facebook account, on which students from both schools post academic and cultural tidbits unique to their respective countries.

“It’s different learning in a classroom than it is talking to actual people,” senior and program participant Vivian Gruendel said. “Exchanging with the kids was really special for us, because we get to pick up on their culture, and they get to pick up on ours.”

A face-to-face exchange hadn’t been approved for the past two years given security concerns due to recent terrorist attacks in France. Conducting the exchange online avoided these issues while still giving students the opportunity to explore a foreign culture.

“One of the most interesting things I learned from it was the French school schedule,” junior and program participant Sarah Gold said. “The [French] government coordinates their school breaks based on the regions of the country so that not everyone is on break at the same time [and] going to all the same places over vacation. I thought that was pretty neat.”

The online medium further offers a unique advantage for the teachers involved.

“It allows the teachers on both ends to get authentic material,” Gold said. “I could make a video in English about some aspect of American culture, and the English teacher in France could plan a whole lesson around my two-and-a-half minute video, because I used vocab that they wouldn’t know, or talked about an aspect of American culture they wouldn’t know about, and the same the other way.”

Many students may also benefit from the online format, which provides an opportunity to develop and refine interpersonal skills.

“It’s good for the [students], because some people are very good at presenting themselves on social networks and other people are a little awkward,” Madame Delfosse, Jefferson French teacher and a program coordinator, said. “It’s a good opportunity; you can redo it and type it.”

Despite these upsides to the Facebook-based exchange, the French department still aims to provide students a fully immersive experience. The department just recently succeeded in this goal, organizing the first face-to-face exchange in two years.

“The French [students] are coming next April. We have not set a date for when we go there,” Delfosse said. “Most likely it will be in the fall of 2018. If not, we will have to wait for spring break.”

In the meantime, however, Jefferson students can continue to learn from and share with their counterparts at Jules Ferry.

“We have posted on both sides lots of interesting things,” Delfosse said. “Some TJ students have shared their science research, which is of great interest to kids in France, not only the content but also the language. It’s been a good project so far.”