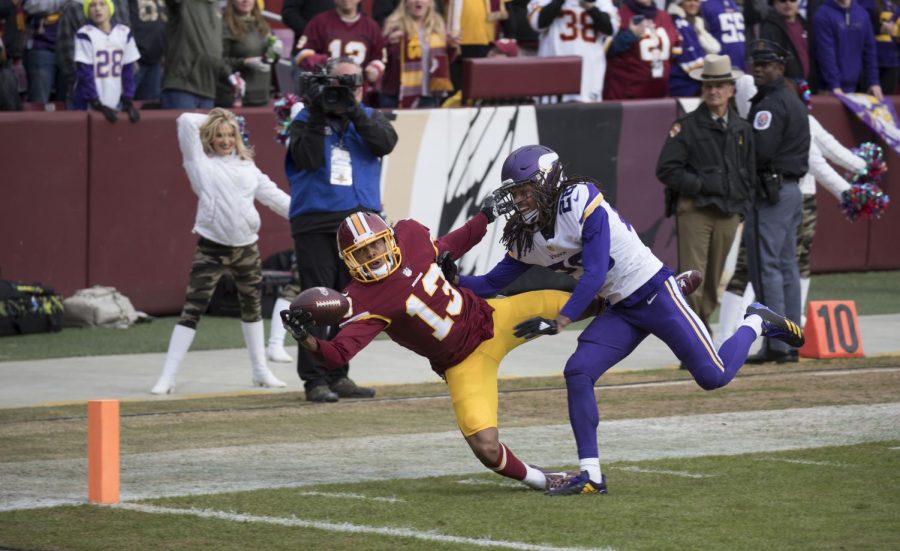 While falling, Washington wide receiver Maurice Harris makes a one-handed catch. Despite his efforts, Washington lost to the Minnesota Vikings by a score of 38-30.

So far this football season, there have been thousands of catches in the National Football League. Some of these catches have been a bit more flashy or impressive than others. Here is a look at what are, in my opinion, the best of those catches.

Playing a game as an away team in Seattle is known for being rather difficult due to the loud crowd noise. Factoring this in, making a diving catch with the game on the line is quite clutch. Washington won the game, 17-14.

Rob Gronkowski is well known for making great catches like this one. However, it still looks good every single time. The New England Patriots proceeded to beat the Buffalo Bills by a final score of 37-16.

In an effort that looked almost like Jermaine Kearse’s catch in Super Bowl 49, Kenny Stills makes what appears to be an incompletion into a catch. The Miami Dolphins beat the New York Jets, 31-28.

4. Marshon Lattimore intercepting the ball with his legs

While wide receivers often make stunning catches, defenders can make them too. Marshon Lattimore makes a nice heads-up play and grabs the ball, which landed on him after it bounced off Atlanta Falcons receiver Julio Jones.

3. Marcus Mariota catching his own pass

Keeping your toes in bounds on a catch requires a lot of concentration. This is especially true when your team is driving down the field with less than a minute left in the game. The catch set up a Steelers field goal to win the game.

Usually, when a receiver tips a ball, he doesn’t catch the ball. Instead, Houston Texans receiver DeAndre Hopkins tips the ball with one hand, and then catches it with the other. And, for icing on the cake, he gets his toes down as he dives for the catch. While it did not result to much in the game, as the Texans lost by a final score of 34-6, the catch is still a work of art.