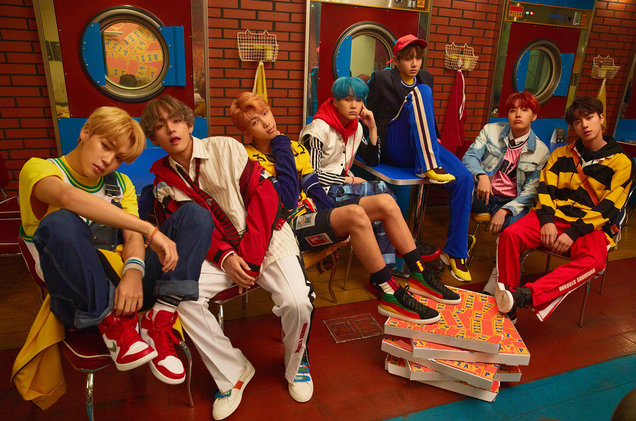 The mention of K-pop often elicits screams of delight or shudders of horror from a growing number of people as the popularity of these boy bands and girl groups skyrockets. Whether you’ve spent the better half of you life obsessing over EXO or have no idea what K-pop even is, be sure to check out this list of Top 7 in 2017.
1. DNA – BTS

As part of their album Love Yourself: Her, “DNA”, by the internationally famous boy group BTS, made history as the only Korean single on Billboard’s 100 Best Songs of 2017. It was also the first K-pop song to be featured on Spotify’s ‘Global Top 50’ playlist and won 10 times in various South Korean music programs. The track opens with a smooth, whistled tune before transitioning into a catchy acoustic guitar rhythm and a burst of electronic melodies. “‘DNA’ is about the expression of a young, passionate love,” BTS’ leader, RM, said in an interview with Billboard. “The lyrics are like, ‘The two of us our connected fatefully from the start, our DNA was just the one thing.'” With its meaningful message and addicting beat, it’s no wonder “DNA” has rapidly grown in popularity worldwide.
2. As If It’s Your Last – Black Pink

Girl group Black Pink’s single, “As If It’s Your Last”, topped Billboard’s World Digital Songs and peaked at 3rd placed on the Gaon Digital Chart, making it a commercial success. The song is known to be Black Pink’s most playful and upbeat song in comparison to their previously darker concepts. “As If It’s Your Last” combines bright electronic beats with powerful vocals and forceful raps to create an addicting number that you can’t help but dance to.
3. Ko Ko Bop – EXO

As the lead single of boy group EXO’s fourth studio album, The War, “Ko Ko Bop” debuted at #1 on five major realtime music charts, topped the Gaon Digital Chart for four non-consecutive weeks, and placed first on the iTunes charts in 51 different countries. “Ko Ko Bop”, defined by EXO member, Chanyeol, to mean “Fun Dancing”, is an energetic reggae-pop track that uses bass guitar and rhythmical reggae beats to create a lighthearted tune. “I wanted my lyrics to have people to become more carefree, release their stress and dance away with the music,” EXO member and co-writer Baekhyun said in an interview with Billboard. With its cheery vibe and quirky lyrics, “Ko Ko Bop” is the perfect song to unwind to at the end of the day.
4. Knock Knock – TWICE

“Knock Knock” is an innocent, light-hearted bubblegum-pop song by TWICE, a group that has been dubbed the “Nation’s Girl Group” in South Korea. It was a commercial success in the country, with its music video becoming the most viewed in the first half of 2017. The track incorporates disco, electronic, and rock elements into an upbeat melody and addicting chorus that will inevitably get stuck in your head. With its sugary sweet lyrics and adorable concept, “Knock Knock” is definitely a song you won’t forget about.
5. Don’t Wanna Cry – Seventeen

“Don’t Wanna Cry”, by boy group Seventeen, is a sorrowful yet fast-paced song that tells the story of the boys’ complex feelings after going through break ups. Unlike their previous singles, “Don’t Wanna Cry” conveys a lot of emotional vulnerability through its mature style and rich vocals. Seventeen’s accompanying choreography is also stunning — combining passionate emotions with sharp lyrical moves at all the right beats. It’s performed at an insane level of synchronization for a group of 13 members. The song’s more melancholy tone sets it apart from the other upbeat tracks on this list, but its beautiful message and gorgeous vocals are truly worth listening to.
6. Really Really – Winner

“Really Really” is a fun tropical song from Winner’s first single album since the departure of their lead vocal, Nam Tae-hyun. After its release, the group charted at #1 in 7 major Korean music charts and they became the third Korean group with the most #1 on iTunes. The single features a dynamic dance beat and smooth vocals that showcase the boys’ lively and carefree sides. With its happy-go-lucky vibe, “Really Really” is definitely something you should give a try when you just want to sit back and relax.
7. Red Flavor – Red Velvet

Girl group Red Velvet’s “Red Flavor” is a quirky, electro-pop track about the flavors of their summer love. It received positive reviews from critics from Billboard and Fuse magazine, placed on several “Top Songs of 2017” music lists, and topped several digital music charts across the world. Featuring a dynamic, funky beat and cheerful melody, the song paints a vibrant picture of sweet summer days filled with romance. The bright and playful vibes of “Red Flavor” will take you back to the lively days of summer, no matter the time of year.