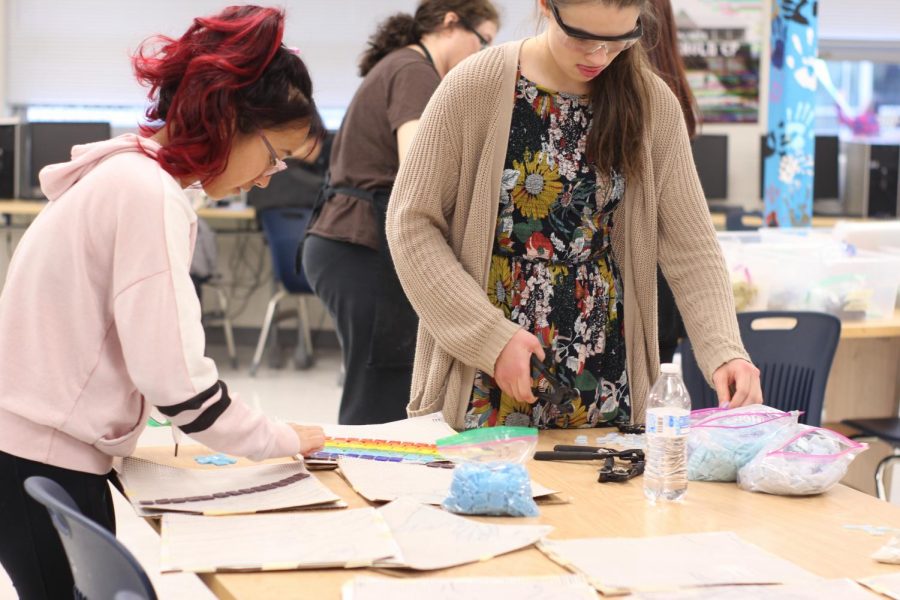 Each week, Art Club is hard at work creating starry night skies and vivid rainbows. They arrange tile after tile of glass, creating mosaics that eventually line the risers of the courtyard amphitheater. The club aims to decorate each of the six risers, meeting every Wednesday during eighth period to work on the mosaic. All students are invited to help. Some drop in periodically while others go regularly.

“I feel like the mosaic project is probably one of the most physical forms of leaving behind what you’ve done in the school,” sophomore club member Daniel Kim said. “Anyone who goes out into the amphitheater can see it and the work that we’ve done in here.”

Art Club has planned out themes for each of the three amphitheater levels, with each level having two risers. The first level is sky-themed, with nighttime and daytime skies. The second level will have land, and the third ocean. Officers are still working out designs as mosaic work progresses.

“For the sky, half of it is at nighttime and in space and the other half is daytime which is what we’re working on right now,” sophomore and club co-president Victoria Yang said. “We’re planning on having different habitats and a dome on the second level. We haven’t decided on the other level yet.”

The mosaic-building process is slow but steady. Each mosaic begins with twenty-five feet of paper. Glass tiles are cut and glued onto cardboard, and mesh is placed on top. The mesh attaches to a layer of mortar. After the tiles are laid, the mesh is removed and the mosaic is complete, ready for the riser.

“Our goal is to finish just the nighttime sky this year and most of the land this year [and] the underwater next year, but it might take two more years,” sophomore and club historian Grace Cullen said. “We’re trying to do land this year but we might run out of time.”

Art Club is currently working on a daytime sky, with a rainbow planned to complement the moon on the adjacent riser.

“Like with the moon, I kind of like how we’re working on a rainbow right now. Unlike most of the parts right now, which are small, it’s going to be much larger,” Kim said.

The club plans to continue work on the project for several years, and work may continue even after the current officers’ graduations. In coming eighth periods, they plan to open an eighth period mosaic work event in the cafeteria open to all students.

“I like working with mosaics because it’s not that detailed and you don’t have to be really good at art to do it,” Cullen said. “I think it’s really cool how you do make a mark on TJ.”