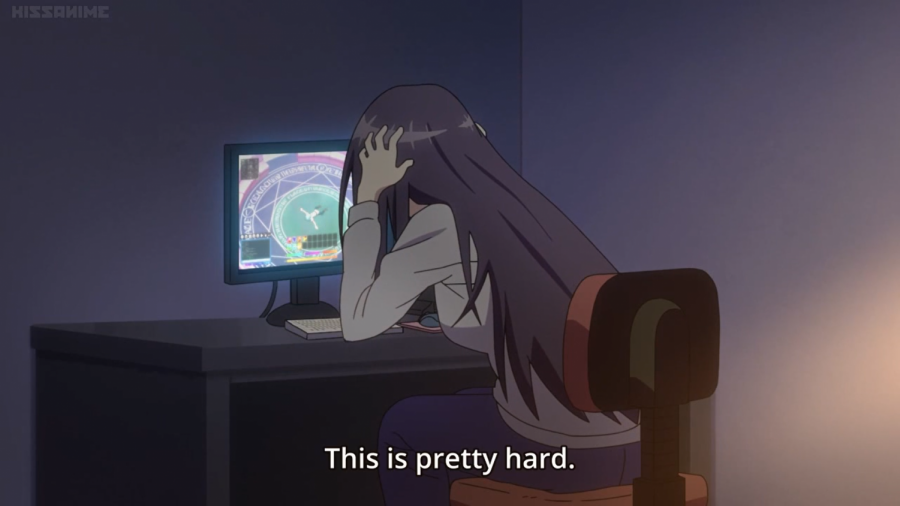 Screenshot taken from the anime "Recovery of an MMO Junkie". Protagonist complains about the difficulties of tackling dungeons as a beginner.

While 2017 wasn’t the best year for anime, the ones that were excellent excelled. Thus, even though I didn’t have any difficulty picking my top seven shows, ordering them led me to borrow Moriko’s words: “This is pretty hard.” And speaking of Moriko…

#7 – Recovery of an MMO Junkie

Recovery of an MMO Junkie may not be the most substantial in plot, but what impressed me the most about this show was the respect it gave its characters while still allowing them to be real people. This is a story about a woman in her early thirties who spends all of her time online as a coping measure for a tremendous amount of social anxiety. Rather than portraying Moriko as a lovable cartoon obsessive or a NEET stereotype, MMO Junkie allows us to get in close and empathize with her situation without judging. She’s a so-called “MMO Junkie” because that’s how she relaxes and interacts with other people: through the safety of the screen, she can have a social life. The romance that develops from there with a fellow player in her game works because she could meet him in a situation where she felt totally comfortable and gave her the ability to slowly transfer those skills to real life. MMO Junkie is a charming, effortless little show that will be instantly recognizable, and particularly heartwarming, if you’ve ever dealt with deep dark social anxiety.

When it comes to this year’s slice-of-life offerings, the best was Miss Kobayashi’s Dragon Maid, a bright and buoyant story of ordinary people and dragons. When the series begins, Miss Kobayashi is at loose ends outside of her job, occasionally going out drinking with her work buddy but mostly just commuting from home to work and back. When she accidentally invites dragon Tohru to live with her, however, she doesn’t bargain on getting a maid and a partner out of the deal. Sharing a home with Tohru gives Miss Kobayashi a reason to come home, relax, and have dinner with someone. And when little Kanna comes to live with them too, Miss Kobayashi suddenly gets to be a parent as well – something she finds unexpectedly rewarding. By the end of the show, Miss Kobayashi has a totally new concept of what it means to come home, a far cry from the isolated existence she was leading before. Tohru, who felt estranged from most dragons in her old world, and Kanna, who’s banned from going home, also find that connection – these three lonely people now have each other. Miss Kobayashi’s Dragon Maid has a sunny optimism that takes the show’s unusual premise (and its unconventional romantic couple) and makes it fly high.

Saga of Tanya the Evil excelled at the design and depiction of its setting, a war-torn alternate reality of early 20th century Europe. In this world, magic is common and fully-integrated into the national military on a strategic level, a premise that’s definitely been done before in anime but never to this degree of thorough detail or impact on the war. The series also stands out from other reincarnation-into-an-alternate-world series by turning the heroine into a ruthlessly self-centered individual locked in a struggle against a godlike being over matters of faith. Not only did I love how Tanya meticulously plan for her own benefit, only to see her immense successes backfire on her efforts to secure a safe and cushy life, but I was also impressed at how well the small touches of humor worked with the darkly pragmatic content. Sharp action scenes, a wickedly expressive lead character design, and my personal best female voice-acting work this year were just cherries on top of the delicious sundae that is Saga of Tanya the Evil.

While I did enjoy season one of My Hero Academia, its sluggish pace and predominant focus on just Midoriya limited the impression of the story. Season two revealed MHA’s deeper strengths, sandwiching astute observations on the heights and depths of the human spirit between one killer fight scene after another. It might not be telling a story I haven’t heard before, but it’s clever, touching, and absolutely bursting with lovable characters you’re instinctively rooting for. The sports festival arc in particular brought a new sense of depth and personality to the cast, revealing their strengths and weaknesses through carefully crafted one-on-one showdowns. On top of that, the story also put forward some fascinating ideas about how powerful heroes and villains might affect society at large. My Hero Academia is a stand-out for crafting a well-rounded, entertaining cast and reinvigorating the shonen formula in a way that is approachable to both newcomers and seasoned anime fans alike.

Scum’s Wish isn’t going to be for everyone. It stars an entirely unlikable cast doing increasingly awful things to one another, repeatedly making decisions that are very bad for their mental health. In this way, Scum’s Wish is a very human show reflecting the selfishness that is unique to adolescent relationships, painfully ugly feelings about love and intimacy, and the self-loathing that consumes us when we find ourselves lacking in those things. But despite all its pathos and agony, I love Scum’s Wish for its big heart. The show never condemns the characters for their twisted desires, cruel actions, or emotional breakdowns as if telling them that “it’s okay; this is all normal. You’ll get through it someday and come out stronger once you do.” If screwed-up high school romance is your cup of tea, Scum’s Wish  delivers all the juicy drama you could want and more—with an added bonus of powerful psychological insights and some unexpectedly heartwarming conclusions. Scum’s Wish wasn’t always easy to watch, but I loved every episode of its surprisingly empathetic journey.

At first glance, Made in Abyss looks like it might be about the cuddly adventures of explorer kids, but the cutesy art style belies a meaningful story that’s emotionally moving, often shocking, and constantly heart-wrenching. Its gorgeous backgrounds make the titular abyss a source of constant wonder, each new episode offering beautiful new vistas and imposing challenges. Its edge of danger give its wanderings a sense of real consequence, a thrill that only bolsters its appeal. While already exemplary as a powerhouse of raw emotion, it’s easy to say Made in Abyss is outstanding because it made us all cry, but it’s also important to take note of how it made us cry. The omnipresent crushing atmosphere of the Abyss is palpable to us, as is the heavy atmosphere that hangs over the show itself, and yet we still want to push on with Riko, Reg, and Nanachi because their compulsion to see what lies beneath becomes our own. For a show depicting the impersonal nature of a deadly environment, Made in Abyss did an incredible job of making us acutely empathize with the way our heroes were put through this otherworldly wringer.

If I’d been told at the beginning of the fall season that my favorite anime of the year would be in 3DCG, I would’ve dismissed the words as complete nonsense, especially after the brilliance of Made in Abyss. However, Land of the Lustrous has proven to be a hidden gem (pun intended) which shows the potential of CGI rendered with the highest possible skill and care that tell this coming-of-age story beautifully. An exploration of post-human creatures in worlds suited to their unique physiological needs, the operations of the gems’ society are deeply tied into their geology in clever ways that serve to reveal otherwise invisible aspects of our own human existence. The character’s struggles with inferiority, the search for purpose, and the nature of change are very much human. While the episodes shift from hilarious to sorrowful, thrilling to somber then uplifting once more, the transitions are natural and there is no hint of a discontinuity anywhere. Land of the Lustrous is a visually inspired show packed with likeable characters and dramatical ambition and emotional insightfulness that make me eager for a second season. I’m happy to name it as my top anime of the year.