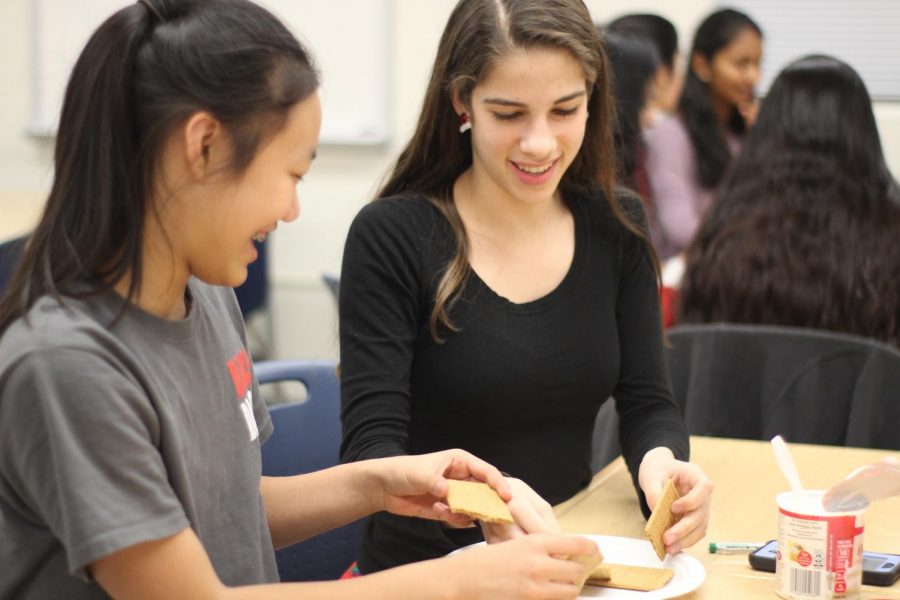 Working together, freshman Rose Du and junior Reilly McBride make a gingerbread house and at the same time helping those who need it.

Gingerbread house making is a traditional holiday season activity. However, during eighth period on December 15, students gathered in room 88 not to make gingerbread houses, but gingerbread jailhouses. The jailhouses were symbolic of Amnesty International’s Write for Rights campaign, which has a mission to write letters about cases in which people’s inalienable human rights have been attacked.

In order to accomplish this goal, participants wrote letters to government officials of countries, asking them to investigate a case, drop charges, release an individual, or stop discrimination and harassment of an individual. Students picked a case that interested them.

“There are ten cases every year,” junior Anica Huang, vice president of Jefferson’s Amnesty club, said. “Amnesty picks cases based on relevant issues today. We have two relating to LGBT rights, a few relating to environmental issues, and then there are usually one or two regarding human rights activists.”

After turning in their letters, they got to build a gingerbread jailhouse. Even if it was made of frosting and graham crackers, it was a symbolic piece of the impact their letters would have on people internationally.

For many students, this was their first time participating in Write for Rights.

“I came here because I’ve actually never done this before,” senior Quinn Ciccoretti said. “It was actually very interesting. I looked at the case of [Issa and Farid], who are being charged by the Israeli government for trying to nonviolently protest. That’s actually a very interesting cause in the world. It reminds me that there’s really an importance to standing up in the world, and hopefully, this letter writing campaign will help.”

For others, it has become a tradition. Amnesty has run this program for 15 years, while Jefferson students have been loyal participants.

“We come every year,” senior Medhini Rachamallu said. “And it’s our last year.”

Students hung out with their friends and participated in a program working to solve worldwide problems.

“It’s a good opportunity for everyone to get involved,” Huang said.