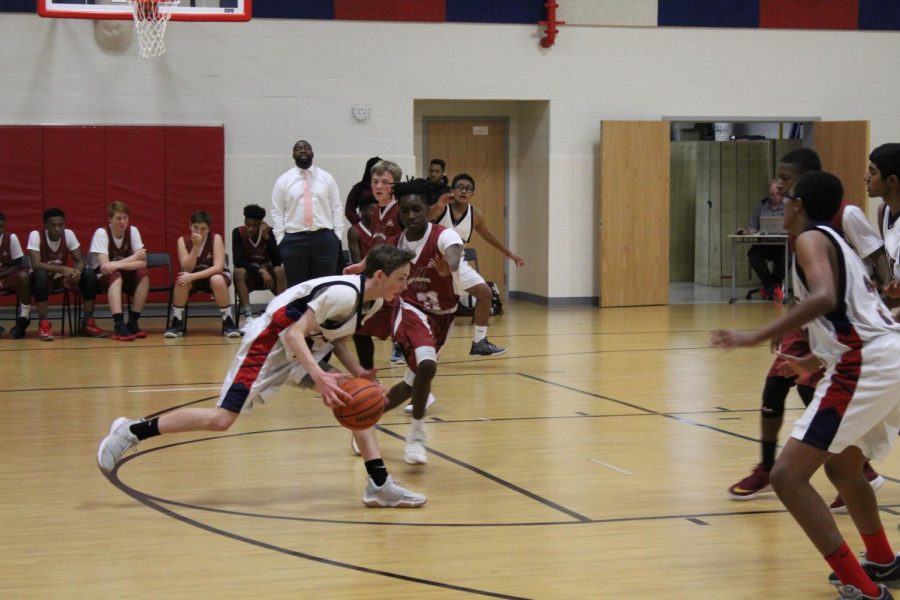 Tightly guarded by the defender and nowhere to pass to, starting point guard Ian Gresenz drives in for a layup. After the losing their early lead in the first quarter, the team was determined to put Jefferson back in the lead.

Jefferson’s Freshman boys basketball team looked to get their first win of the season after losing 2 previous scrimmages against George Mason and James Madison High School. The team played against Mount Vernon High School to begin their season on Nov. 28, but lost 38-44, despite making a 14-point comeback in the third and fourth quarter. Regardless, head coach Jake Boltersdorf praised the team for their hustle and comeback.

“No matter how far down we were in that game, they kept fighting, scraped, and clawed their way back to make that game a pretty close game at the end” Boltersdorf said, “so I feel good despite the score, especially since it’s really early in the season and we’re definitely going to get back and better as the season goes.”

Players on the team also shared their thoughts on the loss against Mount Vernon, including their highs and lows of the game.

“I thought we played pretty well as a team,” starting point guard Ian Gresenz said. “We just need to capitalize on a couple situations, but I think we could have beat that team if we had a bit more time to practice beforehand.”

Small forward Kunal Nakka also shared his thoughts on the game, and mentioned how the team can improve for their upcoming games.

“Personally, I can work on taking it up stronger, playing through their contact, and making more of my free throws. Our perimeter shooting was weak this game, and we definitely could have done better.” Nakka said. “We got a few open looks that we just couldn’t capitalize this time. As a team, we can work more on our communication, taking it to the rim strong, and just working on our finishing.”

“Right now, sometimes I think that we’re thinking too much when we are out there on the floor, where if we practiced a little bit more, it’s just going to be automatic and that’s going to free their mind up to do other things – being aware of what the other team is doing,” Boltersdorf said. “We just put a zone defense and that is still very new to us. They’re still learning our offenses and our defenses, so it’s still the beginning of the process and they’re still beginning to figure things out.”

As Boltersdorf pointed out several reasons to the team’s close loss, he also acknowledged several players who stepped up their game today, contributing greatly to the game.

“Today some of our big guys Caden Phillips and Brian Jacob really stood out to me as just being tough, they’ve had a lot of size on their team, and it was really tough but they did a good job just battling against those big guys” Boltersdorf said. “Ian [Gresenz] definitely gave us what we needed at the point guard position because we just needed a good ball handler there and he played the majority of the game, and he came up with some big buckets, so those were some great individual performances.”

Despite the loss, Boltersdorf shared his final thoughts on the team’s performance and effort against Mount Vernon High School.

“I’m just really proud of the guys’ effort. I thought that they fought hard and hustled after the ball. They just played as hard as they could, and that’s really all I can ask for.”