A Waltz In Time, Paying The Extra Dime- Viennese Ball 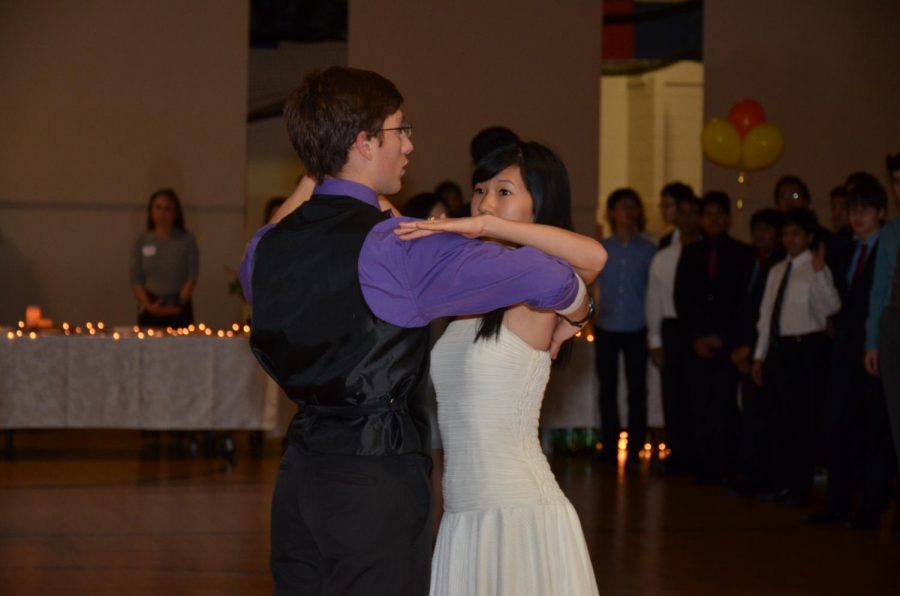 The tranquil atmosphere suffused with the strums and plucks of the orchestra prompted senior Max Judish to waltz alongside Class of 2016 graduate Andrea Tse at Nov. 17’s annual Viennese Ball. Despite the greater entree fee, hundreds arrived to savor the melodic arrangements performed by students, where attendees danced away their stress and troubles through mesmerizing music.

When freshman Olivia Ma entered the Jefferson gym on Nov. 17, she anticipated an uneventful night coupled with lackluster refreshments, decorated streamers, and melancholy music – however, her expectations couldn’t have been farther off from reality. Across the gym, tables showered in appetizing food and the decorations of balloons and lights beckoned her to stroll further down the gym floor. There, the orchestra was warming up a simple scale, and would eventually launch into sophisticated waltzes. To the left and right of Ma, students seized their partners, whether it was a friend or stranger, and began to dance the night away.

An orchestra and a room brimming with waltzing teenagers may not seem part of an average high school dance experience, but that image perfectly depicts Jefferson’s Viennese Ball. The event was overflowing with individuals across four grades, all bantering, eating, and dancing in contentment to the captivating music.

“Most of the school dances are not as appealing to people,” sophomore jazz band member Iris Wu said. “It results in students standing in a circle, while watching a couple brave individuals dance without a care in the world. However, this one’s more calm, while supplying great food and entertaining music. People come for a good time, but the memories being made are priceless.”

As one of the biggest dances of the school year, the standards were raised even higher for this year’s event. In previous years, tickets were priced at $10.00, but for 2017, Jefferson Orchestra randomly surveyed students and inquired how much they would be willing to pay for a ticket to the Viennese Ball. Based on the results from the survey, the Orchestra teacher and director, Ms. Alison Bailey, alongside the presidents of Orchestra, raised the admissions fee to $15.00. As Bailey explains, the dedication of each student performer, along with the commitment of volunteering parents and staff, merits the greater admissions cost.

“So much work and expenditure goes into the event, and we [Jefferson Orchestra] feel that it’s at least on par with homecoming, and it is still cheaper than homecoming,” Bailey said. “We felt that it was the right price for the amount of work and expense that we provide.”

Some students, however, protested the cost, invoking individuals to reconsider attending the dance altogether. Although the $5.00 increase in the entry price may seem insignificant to some, it promptly disinterested those who were still contemplating on whether to waltz at the ball. Freshman Jason Chen, due to a multitude of factors, primarily concerning the unusually higher price, determined not to attend this year.

“By all means, I encourage students to attend and savor the memories they’re creating through the Viennese Ball,” Chen said.“However the higher admissions price mixed with other reasons like my inability to dance ultimately compelled me not to come this year.”

Regardless of whether you were an advocate, an adversary, or impartial to the cost of the Viennese Ball, one fact is surely definite: the entry price did not deter students from attending the ball. According to Jefferson Orchestra presidents Anthony Murphy-Neilson and Liam Johansson, despite the 50% increase, there was no significant disparity in attendance in comparison to prior years, but the orchestra saw no significant increase in profit. The performers of the Viennese Ball undisputedly considered the event a success- after all, Jefferson Orchestra raised over $2,000.00 in profit towards purchasing music, maintaining instruments, and other costs associated with annual performances.