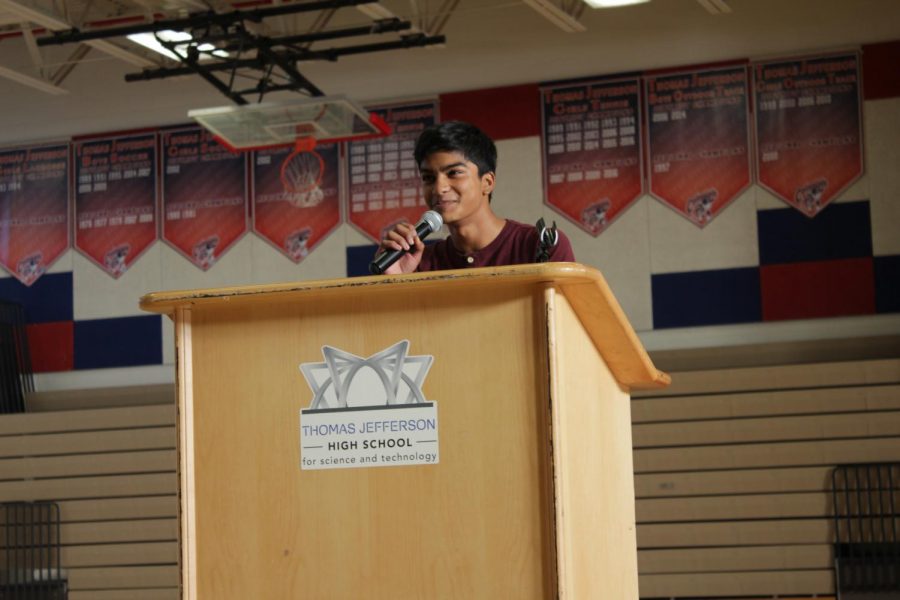 In order to elect a class council and replace their Froshcomm, the class of 2021 voted for a president, vice president, secretary, two senators, historian and treasurer on the Intranet during the week of Nov. 17. Many of the candidates running for class council participated in Student Government Association (SGA) groups previously. For example, candidates Evans Chun, Charlie Wu, and Sarah Wang all had previously participated in Froshcomm or in middle school SGA groups.

“I was on Froshcomm so this was a pushing factor for my [campaign], and I really want to help our freshman class be the best it can be,” Wang said.

A motivating factor for candidates to run is to be able to serve their class.

“I feel like at [Jefferson] I am able to interact with all the students here…I felt like this was really something I wanted to do; I want to help the class as a whole, and my [enthusiasm] won’t go down a bit for helping the class even if I lose,” Wu said.

Candidates can still serve their class even if they lose.

“Even if other people win, the sun goes up and the sun goes down. Nothing would change much, but I would still want to help the class as a whole [if I were to be elected],” Chun said.

Competing for the limited seats in the class council, multiple qualified candidates took the stage for their campaign. Many produced platforms and ideas focusing on planning activities and student advocacy; candidates had to go out of their way to win the votes out of multiple competitors for a single position.

“I would remember those candidates who sang or were funny, so they would get more votes, but you would still need a balance of how much you joke around and how much you are serious in a short speech. For some candidates, it worked out nicely, but for others, it didn’t work out,” freshman Cathryn Li said.

The class council has already started to lay out goals for this year’s activities.

“Instead of the annual Lock-In, I want to focus a lot of my attention on dances and formals such as a winter formal or a spring formal,” Neal Bhatnagar said. “In addition, I really want to get to know my fellow peers and make them feel like they have a voice in big decisions.”

Other candidates, such as elected vice president Jason Chen, wanted to focus on student advocacy and unity in the freshman class.

“A short-term goal for us is really to close the gap between everyone and the class council, because now it feels like people who are elected are ascended to a higher position when it’s really not true. [We will] establish a baseline and trust between class-council, SGA, and the student body,” Chen said.

Some freshmen hope for the class council and SGA to focus more on improving communication between teachers and students both ways.

“Something I feel like is really unfair in TJ is that some classes on the same subject are either harder or easier depending on the teacher. I think that I want the SGA to work on making it more fair for everyone,” Li said.

However, other students say that the class council should start focusing more attention on big issues such as mental health and managing stress.

“I think what Dr. Bonitatibus has going on about mental health and reducing workload is actually really important, especially for TJ students. I also think that class council should also try to emphasize these issues.” freshman Avik Rao said.

Besides setting goals for this year’s activities and improvements for freshmen, the freshman class council is starting to reach out to others for help and contribution to decisions and plans.

“What matters most, beyond everything else, is that every student deserves a voice. Every voice matters. I want to act as the bridge between clarification and communication where students can talk to me and communicate to me and then I can communicate to the class council and SGA to shed light into their ideas,” senator Sean Nguyen said.

Officers repeatedly emphasized that they are open to anyone’s opinions and help for different activities.

“We are more than welcome to anyone who wants to help; Anyone has a voice [in SGA] whether or not they are in class council,” secretary Jordan Lee said.

This year the class council roster is as follows: Udbhav Muthakana and Nguyen as senator, James Huang as historian, Lee as secretary, Tiffany Ji as treasurer, Chen as vice president, and Bhatnagar as president.