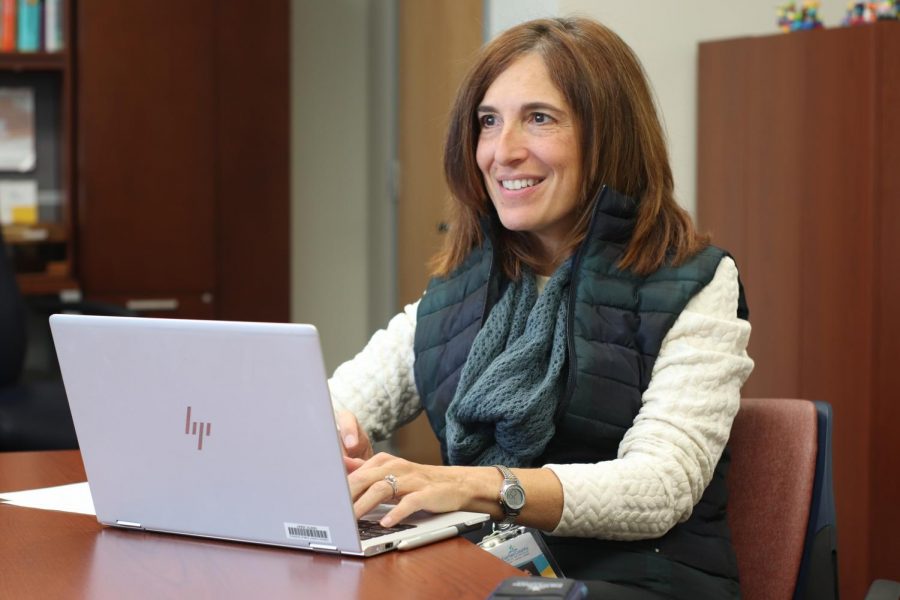 Typing notes onto her laptop, principal Ann Bonitatibus listens in on what participants are saying about their views on how decisions are made at Jefferson. Bonitatibus instituted Colonial Quests as a more direct way to talk to the principal after receiving feedback from student councils and the Student Government Association (SGA). Colonial Quests provide another channel for voicing student opinions. "As students get to know me more and perhaps see results of some of those, I’m hoping that more people will take the opportunity to participate," Bonitatibus said.

To form a more direct channel between the students and administration, principal Ann Bonitatibus began hosting Colonial Quests during eighth period, allowing interested students to sign up for either block to voice concerns and respond to questions posed by the principal. Colonial Quests, or focus groups, comprise one facet of Bonitatibus’ efforts to communicate with the student body outside of formal means such as student government and morning announcements.

“I feel the focus groups are the most personal and have the potential to reach a wider swath of students at TJ because it’s not necessarily through the vested formal ways, such as SGA and class officers, who do a tremendous service for the student body,” Bonitatibus said. “But sometimes people like to just hear things directly, from the principal, from administration. And as students get to know me more and perhaps see results of some of those, I’m hoping that more people will take the opportunity to participate.”

Bonitatibus initiated her first Colonial Quest on Nov. 10, with the most recent session occurring on Friday, Nov. 17. Topics discussed on Nov. 17 ranged from the greatest strength of the community to students’ uneasiness in seeking help. Colonial Quest eighth period blocks, capped at 20 people in order to provide for a more intimate discussion; in addition, participants’ names are kept confidential, as well as the substance of their views, as a standard for these focus groups. Nonetheless, general themes expressed by constituents can help inform administration on student views.

Through publicizing quarterly meetings and acclimating students to utilizing this medium as a vehicle of input, Bonitatibus hopes to continue hosting these focus groups throughout her tenure at Jefferson. She projects the next Colonial Quest’s date for the end of February, and welcomes suggestions for the subjects of upcoming discussions.

“I think I’d just like to get some feedback from those who have participated or as students hear about it and give me some feedback,” Bonitatibus said. “If students become used to it as a vehicle for giving some input and having the opportunity to sit down and talk, then maybe they’ll be more inclined to sign up for and plan in advance.”