Making “Peter and the Starcatcher” 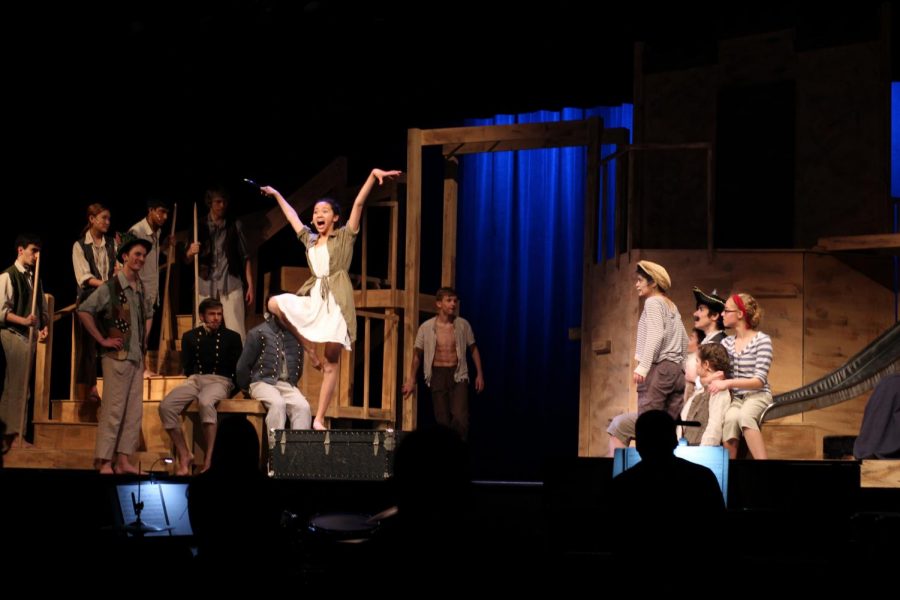 You would expect the halls of TJ to be silent on a Saturday afternoon. However, on Saturday, October 28th, a buzz of energy lit up the auditorium. A dedicated group of actors and tech crew were hard at work on the set, props and costumes for the upcoming fall play. Drop cloths covered the stage as the tech crew painted the structures of what would become the HMS Wasp and the Neverland in beige. The crew laid out dozens of possible outfits for the actors across the floor and seats, in preparation for the play, only two weeks away.  As the group worked long and hard, they sang along to songs from other plays.

The fall production required a tremendous amount of dedication and hard work. Work for the play began almost as soon as school began.

“We had auditions in early September, and like the week after auditions, the casts came out,” sophomore Miranda Khoury, who played Smee, said. “We memorized very early on…  maybe two weeks into rehearsals.”

The cast had rehearsals until 7:15 several times a week. As they approached the date of the play, the number of rehearsals increased to about four a week.

“Then the week before the show we have five days and it’s till nine, every day that week.” Khoury said. “And that’s called tech week. It’s hard but it’s very fun.”

Apart from rehearsals, the actors and tech crew took part in build days. “We have six or eight hour build days, like one every weekend,” freshman tech Safiyah Dandashi said.

During those days the cast and crew made the sets, props, and chose the costumes. Set building takes a lot of work, but the drama crew is able to save some time by reusing pieces from year to year.

They added onto the sets of Les Miserables to make the set for Peter and the Starcatcher.

“We changed all of them, but the base is from the other show,” senior Evan Strong said. “It’s nice to reuse, if we can, but still add a new touch.”

The costume department is in charge of working on the costumes during build days.

“We’re responsible for putting clothes on the actors, and we communicate with our director, Ms. Mathews, to get an idea of what she’s looking for in the costumes, and we try to bring that to life.” Khoury said. “For this show, there’s a really big feeling of just kids playing around… so it’s a very, youthful, slapdash, hastily put together kind of feel we’re going for.”

Members of tech also played a crucial role behind the scenes of the play as a part of run crew or lighting. Members of run crew were in charge of moving set pieces on and off of the stage, as well as holding props for the actors, like the crocodile’s eyes and teeth.

“If all the actors are in the scene and you need something in the background then you see a black arm holding it up. “ said Dandashi.

For many members of drama, the best part of producing a play is being a part of the drama family.

“The community, it’s like a family. I love the people here. Making this production with all these great people is more than I ever wanted from anything else,” Avi Urbach, a junior who played Lord Aster, said.