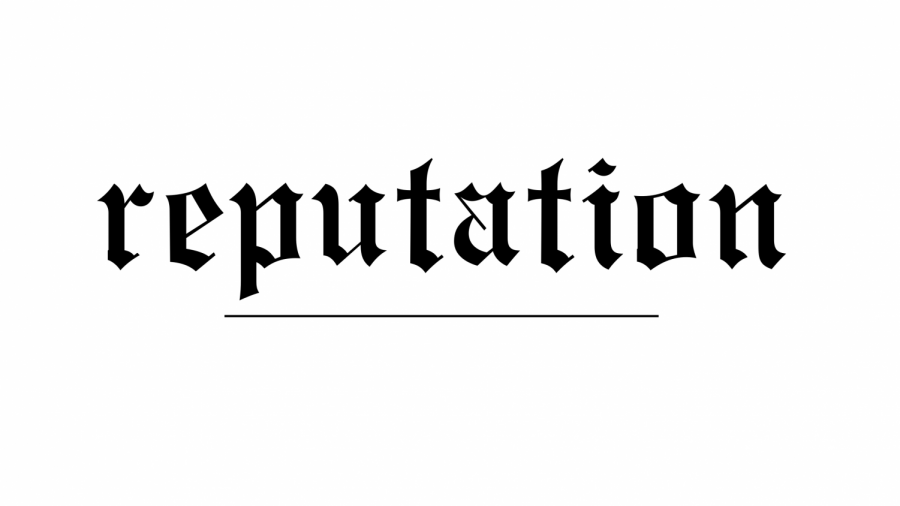 Breaking her typical release of an album every two years, Taylor Swift released her newest album "Reputation" on Nov. 10th, 2017.

It’s been a whole three years since Swift’s latest album, a huge success in its own right  – “1989” debuted at number 1 on Billboard 200, hit 1.2 million sales within the first week and won Swift the Grammy Album of the Year for the second time. It was a sudden shift from the country-inspired tunes Swift was famous for to a full-fledged pop album, full of passionate and lively hits. It established Swift as not only a queen in the country industry, but also a queen of the music industry.

“Reputation” is yet again a sudden shift in Swift’s music, from the more carefree, lyrical whimsicality of “1989” into a darker, more visceral tone. These songs are more heartfelt and expressive than ever before, but also dramatic and angsty, fully embracing the antagonistic image she is infamous for, and it’s Swift at arguably her best. This is the work of an expert, of someone who has just mastered a completely new type of music – the type of work only Taylor Swift could pull off.

This albums opens with “..Ready for It?,” a song pulsing with beats and Swift’s breezing vocals. It’s by far one of Swift’s best pieces on the album – cruel and malicious, but at once sincere and warm. As she told iHeartRadio, “‘…Ready For It?’ is basically, finding your partner in crime, and it’s like ‘Oh my god we’re the same, we’re the same, oh my god! Let’s rob banks together, this is great!’” It’s a more sinister take on her previous albums’ morals and stories – a twist into a more darker side of music. As the song ends, she chants “Baby, let the games begin, let the games begin” –  and the games begin.

From there, Swift goes on to complicate the dark twist formula, inducing hits from “I Did Something Bad,” “Look What You Made Me Do,” “Gorgeous,” and “This Is Why We Can’t Have Nice Things.” These are clear indications of a perfected formula – from the iconic “The old Taylor can’t come to the phone right now,” to the arrogance and impeccable drama of “Did you think I wouldn’t hear all the things you said about me?” Effortless portrayals of rebels, arrogance and boldness set the album clearly apart from “1989” and makes it a masterpiece in its own right.

As “Reputation” progresses, the lyrics become more genuine and the songs more profound. These are the slow jams that Swift still holds on to after six studio albums – quiet and wonderful pieces about love, loss and betrayal. “Delicate,” “Getaway Car,” “Dress” and “Call It What You Want” are Swift at her most vulnerable and most understandable. Graceful, swooning melodies and soft singing set these apart from the pounding anthems that are Swift’s most well-known pieces. It provides a sharp contrast to the other songs on the album, and allows for “Reputation” to be enjoyed in different moods and with varying emotions.

Unsurprisingly, the weakest song on the album is “End Game,” a collaborative effort with rapper Future and Ed Sheeran, and the second song of the album. It relies too heavily on rhythm, which itself is not a flaw – however, uninteresting, repetitive lyrics and an unimpressive chorus ultimately makes it fall short of its potential. It’s a disappointing beginning to an impressive album, and the brilliance of other tracks makes this a second-rate performance.

The album concludes with “New Year’s Day,” an unhurried, rich melody of love and permanence. As Swift herself said, “I was thinking about how everybody talks and thinks about who you kiss at midnight. Like it’s this big romantic idea of like, ‘Who are you gonna kiss at midnight, like ring in the New Year.’ And I think that is very romantic. But I think there’s something even more romantic about who’s gonna deal with you on New Year’s Day. Who’s willing to give you Advil and clean up the house. I think that states more of a permanence. So I was thinking about that, and I wrote this song called ‘New Year’s Day.’”

As the album ends, Swift softly sings “Please don’t ever become a stranger whose laugh I could recognize anywhere,” and “Hold on to the memories, and they will hold on to you.” It’s a sweet conclusion to one of Swift’s best albums so far. Somber, melodramatic and filled to the brim with antagonism and boldness, “Reputation” is something you won’t want to miss out on.

“Reputation” is available for purchase via digital retailers, most notably iTunes, and in hard copy from any local retail store; it is unavailable on streaming services for at least a week or possibly longer, a move only Swift could pull off. Swift has been a continual outspoken critic of streaming services and pulled all of her music off of them in 2014, only recently putting the albums back on – so this is no genuine surprise.