Cross country runs to North Carolina to compete in GAXCF 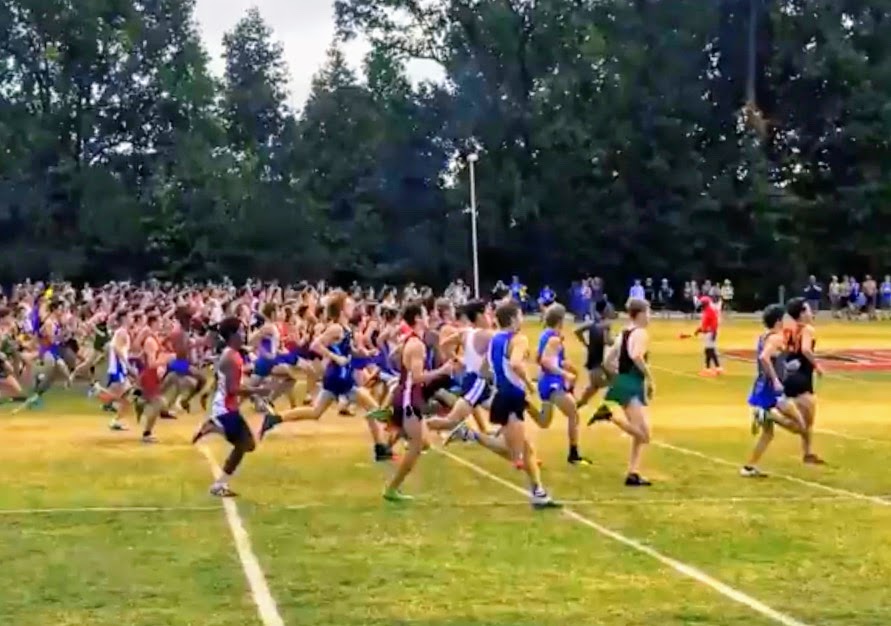 Runners competing in the varsity boys 5000 meter event, including 9 athletes from Jefferson, start the race as spectators cheer on.

On Oct. 7, 43 students on the Jefferson cross country team participated in the Great American Cross Country Festival in North Carolina.

Jefferson raced in four 5000-meter events: varsity boys, varsity girls, and two junior varsity boys races (JV1 and JV2). The team competed against over 100 teams from around the nation.

“We’d never gone to another state for a meet before, so it was pretty interesting,” says sophomore Sydney Szabos, who placed 4th in the varsity girls race. “It was a big meet, so there was a lot of competition, and we got to see some of the faster teams compete.”

The varsity boys team placed 6th overall, and junior varsity boys placed 11th in both events. The varsity girls did not place as a team. Although the team went for the race, it was an opportunity to grow closer with their fellow teammates as well.

“[The best part of the trip was] definitely the night before the race, when we were watching movies and relaxing,” junior Rayaan Malhotra, who competed in the varsity boys race, said. “It was a great bonding experience, and it was the first time to really get to know the freshmen guys.”

Even though cross country is thought of as an individual sport, athletes consider it important to support each other through races.

“No runner can do their best without the support of their teammates,” freshman Ikhlaas Bhat, a runner in the JV1 race, said. “In my last 200 meters, I was pushed by my teammates to go further and run harder; without them, I wouldn’t have been able to run as well as I did.”

During a race, athletes who weren’t competing cheered and encouraged their teammates from the sidelines.

“My favorite part of the trip was watching the varsity guys race in the morning,” says junior and JV1 runner Sebastian Ibarran. “I enjoyed being able to cheer them on while they were racing.”

Although the team was exhausted after the event, the bus back home was filled with chatter.

“Overall, I really enjoyed the overnight trip as a fun time with my team,” Bhat said. “It was a good competition, and I would definitely want to do it again.”