Dealing with the reality of long commutes 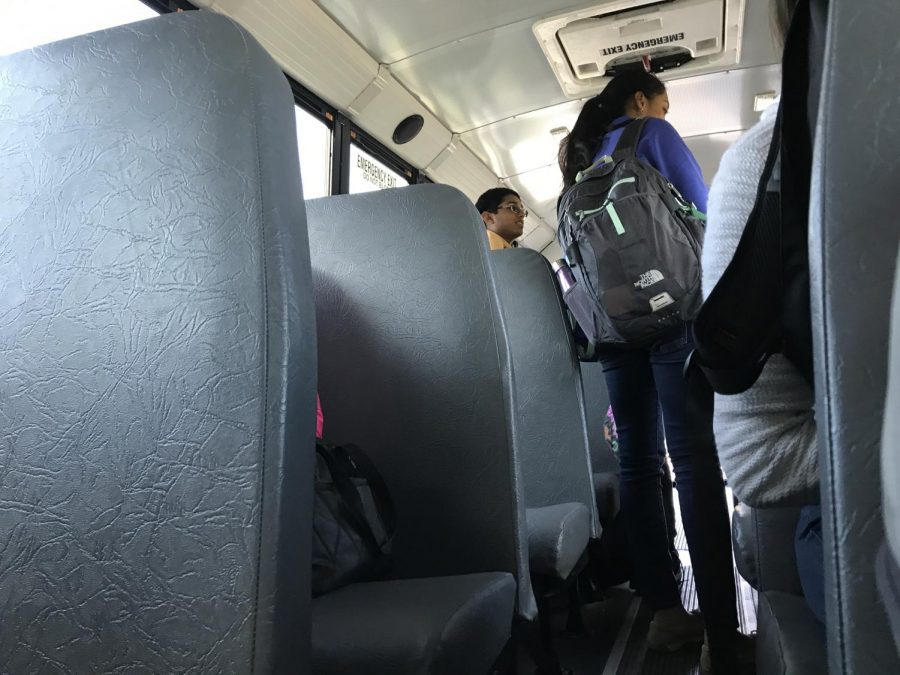 Students took their seats after school on a school bus that goes to Loudoun County.

So many Jefferson students are faced with having long commutes every school day. Many of them live a long distance away from those who live near Jefferson. In fact, some live about 30 minutes away, while others live as far as two hours away.

Generally, many of these students do not agree with the idea of long commutes.

“I actually wake up [at] about the same time as I did during freshman year at about six in the morning,” junior and former froshmore Sarah O’Shay, who lives one and a half hours away from Jefferson, said. “It hurts knowing that I don’t get the same amount of sleep as people who live in Fairfax, but it’s the daily grind, and I have to deal with it.”

However, other students have different opinions.

“Honestly, I don’t mind,” freshman Srilakshmi Medarametla, who also lives around one and a half hours away from Jefferson, said. “I mostly just sleep the whole way or talk with friends, so it’s okay.”

Some students even believe that having long commutes is, in a way, beneficial for them.

“I think it has its ups and downs because obviously, I have to wake up early, and it is a pain, and especially with the amount of sleep I’m getting nowadays due to the amount of homework, but at the same time, it’s a time for me to force myself to wake up and finish any homework that I was too lazy to finish if I hadn’t had such a long bus ride,” sophomore Emaya Anand, who also lives about one and a half hours away from Jefferson, said. “And so it kind of gives me better time management because when I go to college and when I go through work and all that, it will be much more useful.”

Additionally, as time passes by, some feel that long commutes are just a normal part of their lives.

“I’m in Marching Band, so naturally I’m going to get home anyways,” Anand said. “I’m kind of used to it by now.”

During their commutes, students do a variety of activities to pass the time.

“If it’s in the morning, I typically study for that day or do homework I didn’t do last night, but in the afternoon, I’ll just like, yeah, talk with friends or take a nap or something,” Medarametla said.

As mentioned earlier, the lengths of the commutes between the students who have long commutes vary widely, which means those who live quite farther away from Jefferson have to wake up much earlier than others who live relatively closer.

“When I think about it in comparison to people who live in Prince William, they have to wake up at 5 [a.m.], [so] it’s at least not that bad,” Medarametla said.

All in all, long commutes has its benefits, but some students believe shorter commutes would be better for them instead.

“At first here at TJ, I was very sad because of it [having to get home later], and I [got] home like about two hours later than my siblings do, but I feel like once I get home, I just start working on homework instead of procrastinating because I would do that if I get home at like 4:30 [p.m.] definitely,” O’Shay said. “[But] I wish I had a shorter commute because I would be able to wake up later and get home earlier.”