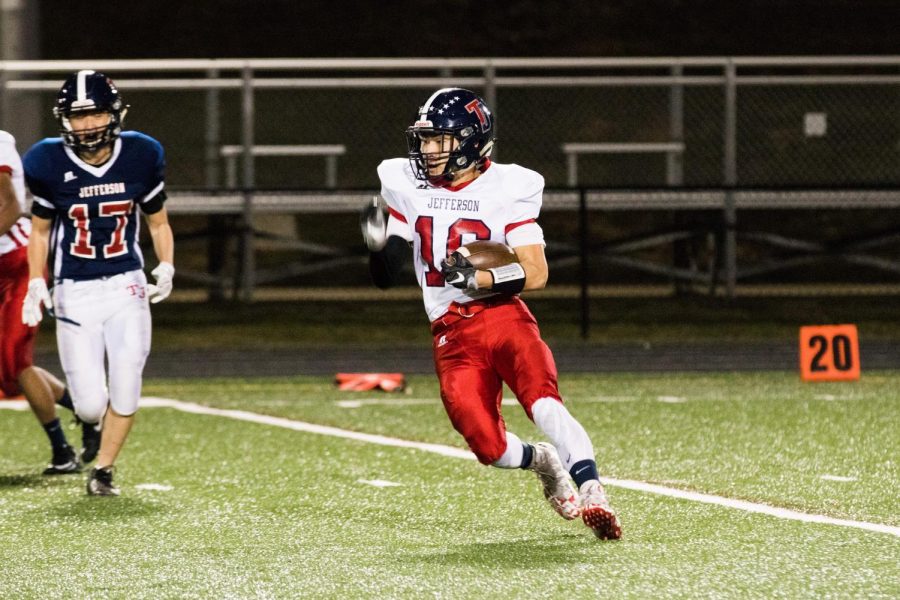 Junior Justin Kim makes a dash for the end zone, ball tucked in tightly under his arm, looking for a touchdown.

Ending with a final score of 20-14, the Jefferson football team’s senior night saw the white team, led by senior Wonwook Do, triumph against the blue team, led by senior Danny McCray, during the intrasquad scrimmage on Oct. 27. It was a bittersweet ending to one of Jefferson football’s more successful seasons, finishing with a final record of 3-6.

One of the major setbacks of the scrimmage was the fact that there was no real opposition from another high school. Due to a lack of players, the planned opponent, Model Secondary School for the Deaf, had forfeited, leaving Jefferson with a win but with a letdown as well. Football, cheer and marching band seniors had been preparing both mentally and physically for the last game of their high school careers, and ultimately found out that they had already had it.

To salvage senior night’s excitement and school spirit, the football team organized a scrimmage between themselves – an intrasquad game consisting of the roster divided into a white team, captain of which was Do, and a blue team, with McCray. Commencing with the usual senior presentation at the beginning of the ceremonies, senior players and their families walked out onto the field, as the announcer declared their college ambitions and some of their favorite memories from their participation in the Jefferson sports program. Marching band and color guard flaunted their last football game performance of the season, and the game began.

Battering through the paper sign and fervidly waving the American flag, the football team rushed out onto the field, whooping and hollering with the hyped buzz of their final game. Seven minutes later, the blue team scored their first touchdown and extra point. One minute later, the white team scored a touchdown but was unable to capitalize on any extra points, falling behind and closing the first quarter 7-6, blue team at the lead.

The first half finished with the blue team farther ahead at 14-6, who had gained another touchdown and an extra point. The half-time show consisted of the Colonial dance team’s hip-hop performance, which was met with applause from the stands, and then it was off to the races, with the white team endeavoring to get to back to equal status with the blue team.

Seven minutes in, the players in white scored both a touchdown and two more points, tying up the final game. Senior Michael Li, with a horse-collar tackle, had the announcer playfully declare, “We won’t call out your number, Michael,” earning chuckles from the crowd.

It took until the final three minutes for another touchdown to happen – yet again by the white team with their third touchdown in a row, finalizing the game’s score at 20-14, the white team being the winner. The game finished off with junior Justin Kim running around the field as his teammates chased him – a lighthearted finale to Jefferson’s 2017 football season.

As the game ended, the crowd filed out of the stands, thinking the game to be over. But there was one last performance to be had – the Thomas Jefferson Marching Colonials’ (TJMC) senior night performance. Marching band and color guard seniors decked out in colorful outfits, from sharks to unicorns to even a chicken, ran around the field. It was a sight to be had: the marching band looked serious and focused as a chicken leapt in front, a unicorn flag waved behind them, and a miniature poi performance was being displayed on the side.

When they finished, the seniors met in the middle of the field and rejoiced with a deafening cheer – wrapping up the humorous conclusion of the last Jefferson game the class of 2018 seniors will perform at.

“I’m really sad that this is our last football game performance because performing with TJMC has meant a lot to me,” senior Grace Young said, “but tonight’s been really fun, so I think I’m [going to] make the most of it.”

And make the most of it they did.