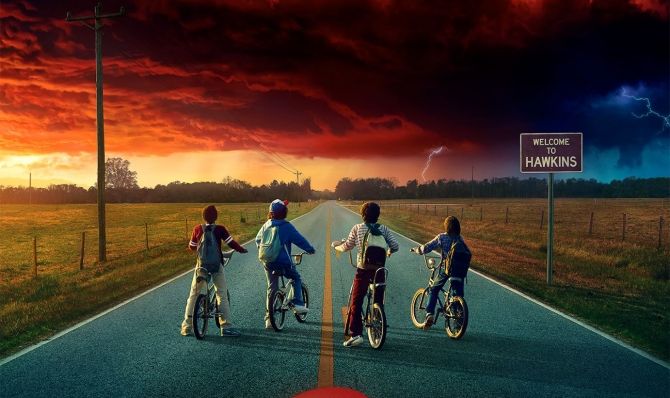 Mike (Finn Wolfhard), Dustin (Gaten Matarazzo), Lucas (Caleb McLaughlin), and Will (Noah Schnapp) look out over the horizon to confront the latest threat to Hawkins, Indiana. Hawkins exists just near a parallel universe known as the Upside Down, from where monsters crawl into the town.

I race off the bus, my heart pounding with adrenaline. As soon as I step through the door, I bolt for the bedroom, my hands already fumbling to open my laptop. With a cup of hot cocoa to my left and a box of Eggos to my right, I take a final shaky breath and press play.

I’ve waited over a year for this moment.

Netflix released season 2 of its hit show “Stranger Things” on Oct. 27. I binged it with reckless abandon and finished it in a weekend, and it was everything I could have hoped for–and just a little bit more.

“Stranger Things” takes place in the small, quiet town of Hawkins, Indiana, where the sinister goings-on in a research lab begin to affect its unsuspecting residents. In season one, Will Byers (Noah Schnapp) mysteriously vanishes without a trace, and the entire town searches for him. As time passes, Will’s disappearance hints at supernatural forces descending on Hawkins–and a parallel universe lurking beneath the town’s noses.

Season two of the show takes place almost a year from the season one finale–without spoiling too much, the town’s peaceful facade peels apart almost immediately to reveal something wicked lying in wait–and it is hungry.

I’m not a huge fan of horror movies, but I love “Stranger Things.” Why? Because while it does have its scary moments (at times, I had to watch through the slits of my fingers), it also has its endearing ones. Each of the characters–from fiercely determined Joyce Byers (Winona Ryder) to solemn but loyal Mike Wheeler (Finn Wolfhard)–has his or her own core relationships and personality that develops independently of the plot. Friendship, love and trust make up the core pillars of the show–from Mike, Lucas (Caleb McLaughlin), Dustin (Gaten Matarazzo) and Will’s close bond to Joyce, Jonathan (Charlie Heaton) and Will’s strong family ties, it’s impossible not to root for the “Stranger Things” heroes.

The acting in “Stranger Things” Two was stellar, and moved me beyond reason. Noah Schnapp in particular excelled–his acting during the season is something you need to see to believe. Finn Wolfhard shone as he revealed the emotional complexities of Mike’s character, and his scenes were some of my favorite in the entire show. As per usual, Millie Bobby Brown was fantastic as Eleven–an escapee from the Hawkins Research Lab with telepathic powers.  Though Brown’s dialogue is limited, her delivery of each word gets me every time.

If I think long and hard, I can identify some flaws in “Stranger Things.” I wanted more interactions between Eleven and the core four in season 2. At times, the special effects were cringe-worthy and overdone–the end-of-episode cliffhangers unnecessary. But the feeling I walked away with as the credits rolled during episode nine was pure adoration for the show and its characters–and eager anticipation for the show’s next chapter. No matter how long the hiatus, “Stranger Things” steals my heart every single time. That is why I will never keep my curiosity door locked.