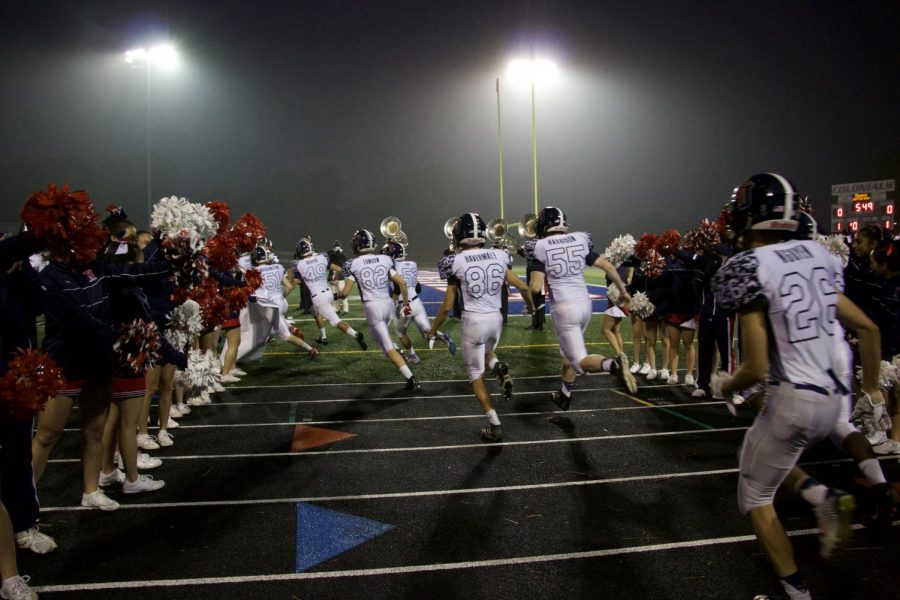 Jefferson's cheerleaders and Marching Band welcome the varsity football team as they run out to the field.

Jefferson’s varsity football team won for the very first time in four years against the Northern Virginia Kings with a score of 19-7 during the Homecoming football game on Friday, Oct. 13.

Many Jefferson students attended the game and cheered on the team along with Jefferson’s cheerleaders and the Marching Band. In the beginning of the game, senior quarterback and defensive back Wonwook Do returned the opening kickoff for the first touchdown.

“That felt great,” Do said. “I told [senior running back and linebacker] Danny [McCray], the other captain, that if I got the opening kickoff, I would score on it, and it was nice to deliver on that promise.”

Despite not being able to make any more touchdowns during the second half, Jefferson’s strong start to the game allowed them to eventually beat the Kings.

“It felt great. It was such a relief and such an emotional release for the team,” Do said. “A lot of us didn’t even know how to celebrate that first win because we just haven’t experienced one yet, so it was just something great for the team. I think the school deserved it after four years. I was really happy we were able to do it during Homecoming and in front of all our fans. It was just a great time.”

The coaches were also proud of the team for playing their best.

“I know these young men have desperately wanted to give TJ a victory, and for them to be able to deliver a win on Homecoming makes it even more special,” Head Coach Bill Rechin said.

The team’s win is something they will remember for a long time.

“I think we played the best that we have all this season,” junior offensive lineman and linebacker Matthew Cohn said. “First of all, since we did get to win it, each game is special because in order to win, no matter who you’re playing [against and] how good the other team is, you need to be on your absolute best performance to win against even the worst of teams [and] against the best of teams. The winner is always going to be the one who plays the hardest and plays like they are the winner.”