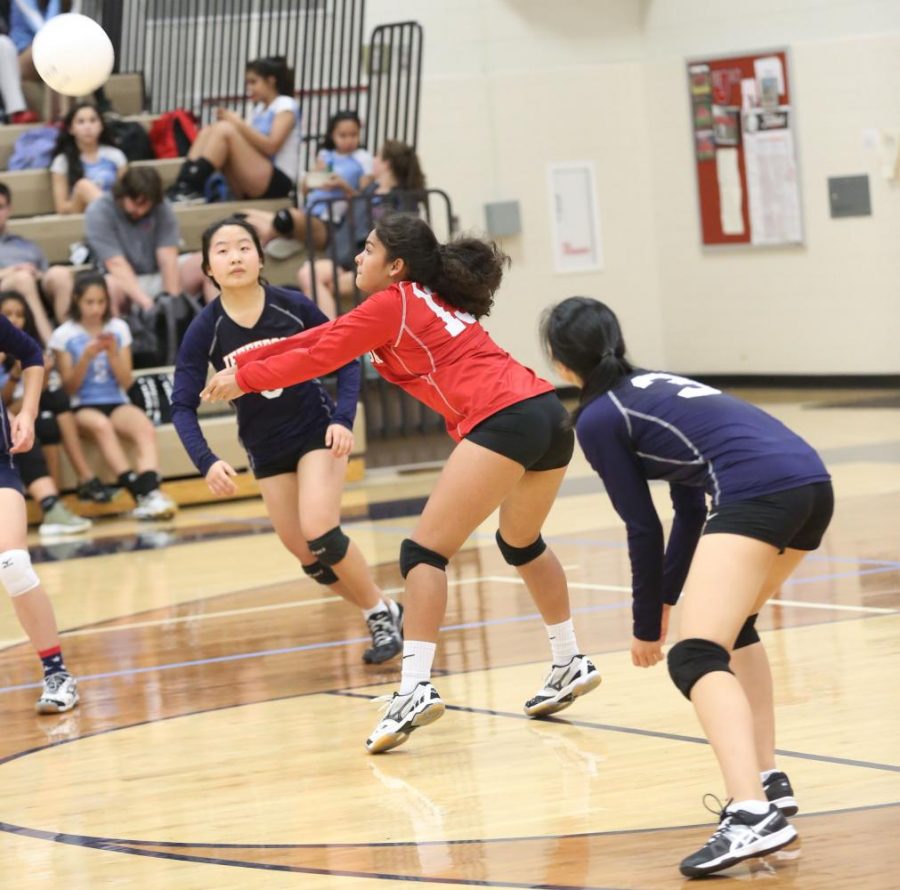 Libero Trisha Pal passes during serve receive while setter Samantha Yap rushes to her position to receive the pass.

The Jefferson JV volleyball team lost against the G.C. Marshall Statesmen in the volleyball game on Oct. 10. The Colonials fought well with a final score of 25-16 in the first set and 25-13 in the second set.

Going into the game, the players were confident in their team’s ability. They were eager to play Marshall again after losing to them on Sept. 12, towards the beginning of the season.

“I like playing Marshall because they are a bit of a challenge,” right-side hitter Reena Medavarapu said. “It’s usually a fun game.”

In the first set, Statesmen’s #14 kept TJ in a losing streak with her powerful serves.

“We had a lot of difficulty on serve receive,” head coach Kate Genton said. “[We need to make] sure that those balls stay on our side so we have a better opportunity to hit it back at them.”

The opposing servers did a good job placing their serves in spot 6 and 1. The back row struggled with getting the first pass high and to the middle of the court so the setter could provide a good set to the hitters.

“We’ve been practicing [serve receive] for a while,” Medavarapu said. “But we did better than we played last time.”

Medavarapu and outside-hitter Jessica Chen both made several nice plays during the first set.

“My outsides and my right sides did a good job mixing up their shots, hitting to spot one [and] tipping into the middle,” Genton said. “[They were] making those plays happen.”

Captain Andra Velea, who plays as a backrow setter, was proud to see her teammates not giving up during the game even though they were losing.

“The best part of the game was the determination to win back every point,” Velea said. “The effort was good.”

JV has had a strong season so far and would like to continue their success through the last week of the season.

“We’ve been doing a lot in practice and we’ve been improving a lot over the season,” Genton said. “I’m really proud of my girls so far.”