The homework behind Homecoming 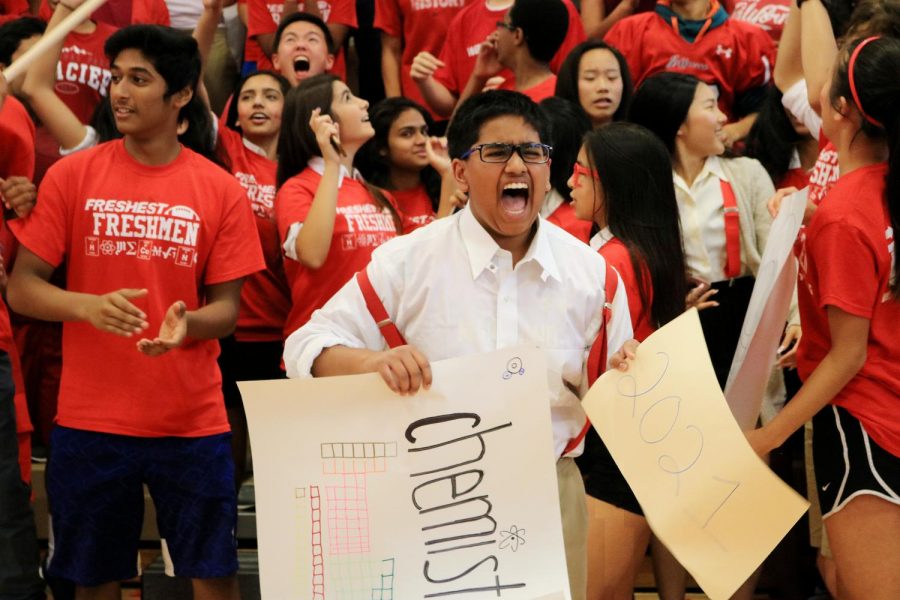 Unleashing his spirit in the pep rally cheer, Freshman Arul Nigam celebrated fervidly alongside his fellow freshmen as Class of 2021 strived to be the most spirited class on class color day. During the final pep rally on Oct. 13, the freshman endeavored to maintain their lead over the sophomores by displaying spirited and exuberant roars with balloons and banners drifting high above the freshmen’s passionate chants.

As freshmen ascended onto the gym floor, their initial pep rally, they paused in awe as a display of contentment and animation lit up on each student’s face. Banners, balloons, and streamers crowded the room as enthusiasts celebrated and presented an array of inventiveness and enthusiasm into their role calls and best dressed. As an upperclassmen illustrated, our life through Jefferson is a book, and those who experience homecoming are chapters in their stories.

Students across the Jefferson community anticipated the annual homecoming activities varying from floats to musical extravaganzas (MEX). Beginning Oct. 5 with the initial pep rally, homecoming spirit week yielded a symphony of unforgettable memories and experiences. While most individuals enjoy the celebrations and events occurring throughout the school, not many consider the work devoted to the success of homecoming. From the choreographers leading MEX to actors performing their roles in the spirit videos, students with varying expertise endeavored for several weeks to establish the elements of homecoming.

Starting Oct. 5, the classes assembled hundreds of students to display their boldest and brightest costumes as well as unite in spirit roars and commencements. However, a spirit event isn’t worthwhile if individuals choose not to participate; fortunately, hundreds of students willingly participate in these celebrations to flaunt their spirit. Jefferson students, with their competitive nature, go to great lengths to ensure their class attains the most points at the pep rally.

“For dress your best day, you’ll see people in full length gowns, and if you’re not dressed up, you’re the weird one,” Sophomore Class Council President Jessica Chen said. “You can go far and wide, but there really is no place like homecoming at TJ. You will know it once you see it.”

Although pep rallies happen every day during lunches, various other activities ensued including the MEX performances on the final homecoming spirit day. Each performer spent hours upon hours rehearsing and perfecting their role prior to the performance, a blend of synchronized dances, light effects, and extravagant costumes.

Leading the class of 2021 in the choreography amongst five other skillful dancers, freshman Rose Du produced an array of dance moves that she believed freshmen could readily learn. Although Rose has been dancing for a nine years, one of the most burdensome challenges was the lack of participation.

“The MUN trainings and the fact that people thought MEX was weird was the reason we had an inadequate amount of participants,” Du said. “However, this didn’t deter me at all. Rather, it provided each dancer more attention and a means for me to refine and improve the struggling sections.”

An exceptional homecoming experience would be lacking if each class could not display their individuality; thus, homecoming instituted the spirit video, demonstrating students’ cinematography skills and inventiveness. Each of the four class councils formulated a five-minute-long video with the aid of student screenwriters, actors/actresses, and video-editors. For the freshman class, their spirit video and original rap song “Freshest Freshmen” related to their theme, “Scholars in the Light, Ballers in the Night,” highlighting the athletic aspect of Jefferson.

“When any high school student thinks of TJ, they immediately assume this school is purely STEM based and completely disregard our athletics community,” freshman spirit video producer Jordan Lee said. “Yet, there is so much more beyond the surface. We are a community of athletics that is disregarded due to our academic curriculum; therefore, it was necessary that [other] high school students understood through the spirit video that our athletics program is parallel to theirs.”

Although homecoming was an occasion for celebration and spirit to break from the toil of the classroom, Money Wars contributed a philanthropic element to the festivities. This year, the Student Government Association (SGA) donated Money Wars funds to those devastated by the hurricanes of Harvey, Irma, and most recently, Maria.

“We really wanted to have an organization that would assist with disaster relief and areas impacted by hurricanes,” SGA treasurer junior Sitara Uppalapati said. “[SGA] established that ‘All Hands Volunteers’ would be a great charity to donate the money we collected to.”

As all homecoming events came to a conclusion on Oct. 13, the seniors were announced as the first place winners with 3200 points. The juniors, trailing behind the Class of 2018, were in second place with 2025 points. Although the freshmen were superior in points to the sophomores for the majority of homecoming, Class of 2020 gradually advanced into the third place rank due to their float and MEX performance; sophomores acquired a sum of 1650 points with the freshmen only 150 points behind. To complete homecoming festivities, the varsity football team triumphed 19-7 against the Northern Virginia Kings in Jefferson’s first varsity victory in four years.

Despite the contestation for the most points between the classes on the days leading to the homecoming dance, these events create a lasting bond between all students. From remaining after-school for float assembly or allocating weekends to rehearse MEX to being engaged during pep rallies, the community during homecoming week becomes more unified and spirited than ever before. And that is truly unbeatable.