Decision to end DACA was a poor one 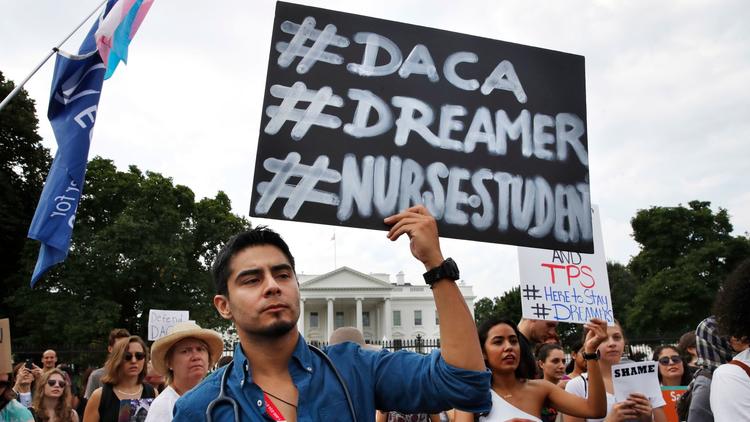 Photo courtesy of the Los Angeles Times. Carlos Esteban, a nursing student from Woodbridge, Va., protests with a group of people outside of the White House in support of DACA.

In June of 2012, the Obama administration passed an executive order known as DACA (the Deferred Action for Childhood Arrivals program). DACA has been allowing minors who entered the country illegally to remain in the United States and apply for a work permit. These “Dreamers” don’t receive legal status-rather, they are deferred from deportation for two years.

DACA seems like a reasonable policy-after all, it seems unlikely that young people under 18 who entered the country illegally are to blame for their family’s decision to enter the United States. It seems fair that Dreamers who aren’t criminals have the opportunity to stay here and work without fear of deportation. Despite this, DACA has faced opposition since it was passed, mainly from Republicans who disagree with the policy, and others who question its legality.

On Sept, 5, 2017, citing these reasons, the new Trump administration decided to rescind DACA, giving Congress only a 6 month period to “legally” pass relevant immigration reform and save these Dreamers. Yet, it seems unlikely that a Republican-controlled Congress, already seeking to pass further border control, will be able to legally pass DACA, leaving blameless Dreamers to be deported.

Trump’s stance on DACA seems to be evasive and unclear, given that he’s simultaneously made statements with nativist sentiment yet supported the legalization of DACA through Congress. Currently, it seems that Trump supports the policy, but disagrees with how it was passed by the Obama administration. However, the Trump administration wasn’t justified in using the questionable legality of DACA as sufficient to rescind the program as a whole.

First, legal experts are divided on the legality of Obama’s executive order, even though Republicans make it seem as if Obama illegally passed DACA. In fact, although other courts have been divided in addressing this issue, the Supreme Court has not been able to set precedent on whether or not Obama overstepped his executive power by passing DACA.

Next, Trump’s action to rescind DACA itself may not be constitutional. Based on a lawsuit filed by 16 democratic and nonpartisan attorneys, DACA could violate due process as outlined in the 14 amendment, for example, by using private information Dreamers gave to the government when they registered for DACA.

At the end of the day, then, there’s no excuse left for the Trump administration to justify rescinding DACA. It’s a reasonable policy, and rescinding it leaves 800,000 Dreamers stranded with little constitutional basis. This is not the American Way.