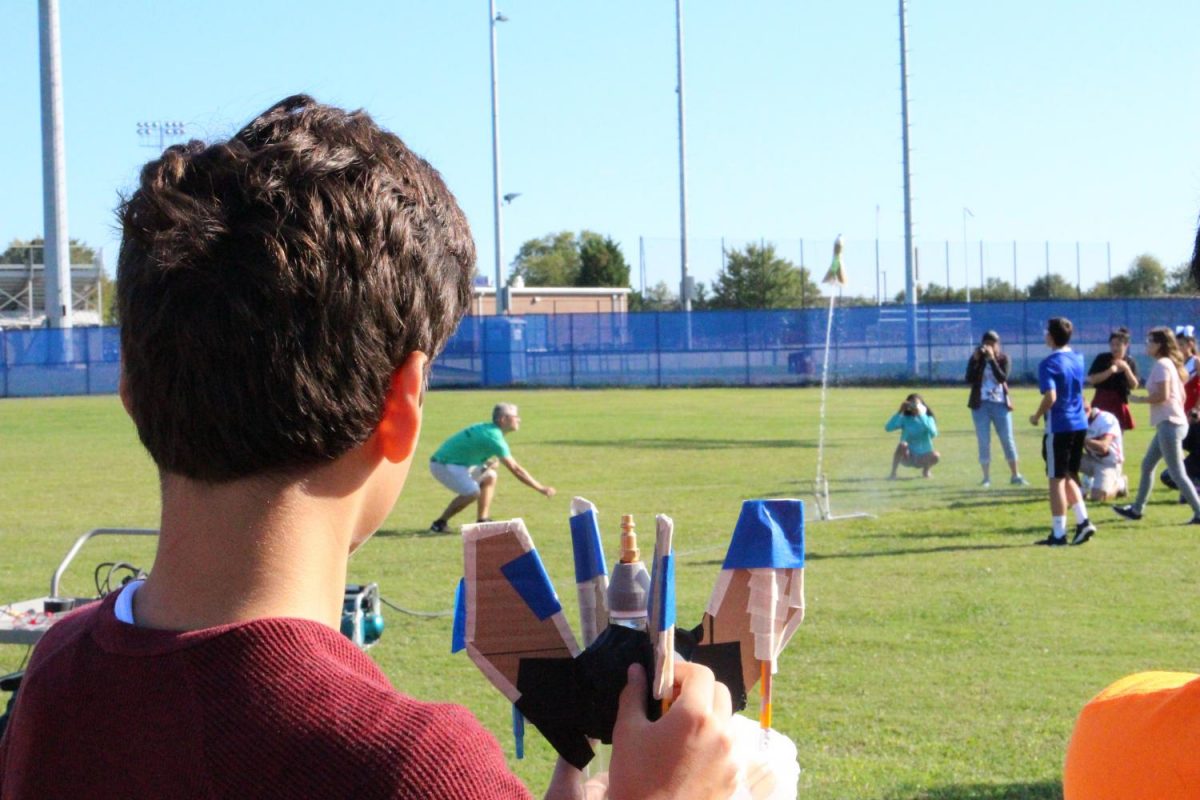 As part of the class-wide Water Bottle Rocket Design Challenge, freshmen gathered on the baseball field on Sept. 14 and 15 to test their rockets, hoping to develop skills in technical design and create a practical connection to their English 9 summer reading, “Rise of the Rocket Girls.”

“Any marginalized group or individual is not likely to get a fair share of recognition,” English teacher Lona Klein said. ”We wanted to switch to more characters and a wider perspective [and] look at early developments in math and science fields for a TJ summer reading. Hence, ‘Rise of the Rocket Girls.’”

The goal of the project was to launch a rocket approximately 40 feet into the air and have it land no more than two feet from its original position, all while cushioning an egg stored in the rocket’s compartment to keep it from shattering upon impact. Students tried to reach a compromise between firing the rocket as high as possible while also keeping it durable enough to protect the egg inside.

“My rocket is using bubble-wrap that our teacher gave us as a pillow, so that the egg won’t break,” freshman Gideon Fenster said. “We also chose some panels and fans out of the supplies we got assigned, since we figured we’d keep [the rocket] in the air, and a Pepsi bottle instead of a plastic water bottle so we could have more space for the egg.”

Others were more focused on keeping the rocket as high in the air as possible.

“My partner and I originally wanted to use a parachute, but then we decided to have styrofoam pieces instead,” freshman Eban Ebssa said. “They’re super light and let the rocket float a little in the sky, and they cushion the egg, too.”

While observing their students’ work, Design and Technology teachers looked for creativity and practicality in design.

“The main picture is that we want them to go through the design process,” tech teacher Jared Seyler said. “It’s not even about the rocket’s flight as much, it’s about going through the process and seeing how [the students] approach improving their design and testing and prototyping their projects.”

Fenster, Ebssa, and teachers alike agreed on the difficulty of controlling the rocket while it remained in the air.

“The challenging part is to keep the rocket stable in flight and get it to do what we want after it’s up,” Seyler said.

The project sought to emulate the originality of the protagonists in Rise of the Rocket Girls. Not only did the experience help freshmen to gain a background for project design, it also required them to test their limits and create something new.

“We know about these women because they refused to accept the status quo—they did what they loved, career-wise, and they made some sacrifices to pursue fields that inspired them,” Klein said. “If you find a field of study that brings you joy, stick with it.”

The Water Bottle Rocket Design Challenge provided an opportunity for the class of 2021 to show what they’ve learned in tech class, and helped them start thinking about the future and how they want to utilize their knowledge and prototyping skills.

“We had plenty of liberty with the project,” Fenster said. “I’m just glad I could use what I’ve learned and do something with it.”