Top 5 impressions after watching “Battle of the Sexes” 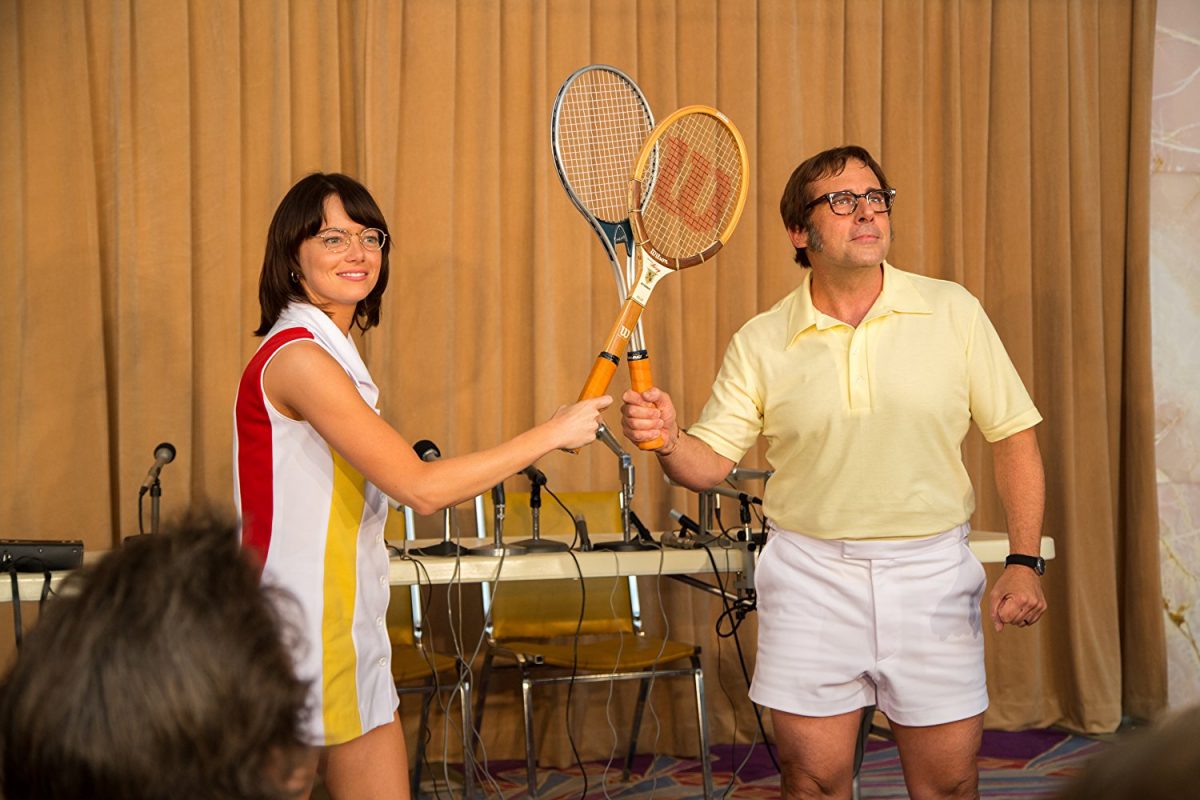 Billie Jean King (Emma Stone) and Bobby Riggs (Steve Carell) interview and pose for the press before their major tennis match, known as the “Battle of the Sexes.”

“Battle of the Sexes” is a sports film based on the story surrounding the widely-broadcasted tennis match between Billie Jean King and Bobby Riggs in 1973. Through his showy nature, Riggs belittles women throughout the film and King takes on the predominant role in attempting to prove the worth of women all around the country.

Here are my strongest takeaways from “Battle of the Sexes”:

The cinematography was touching and powerful in establishing our interpretation of characters. “The less the character lets us into their lives, the further away we were with zooms, while the most intimate scenes we were hand-held and close with primes,” cinematographer Linus Sandgren said, according to IndieWire. The close-ups and soft lens flares conveyed a dreamlike sense of warmness and intimacy in the romantic scenes between Billie Jean King and her lover, hairdresser Marilyn Barnett.
Emma Stone and Steve Carell, who played King and Riggs respectively, acted in a believable way. Their raw portrayals — of King’s struggle choosing between husband and lover, of the tension between female and male tennis player — is a rarity in movies today, where scenes are commonly shot to look perfect and pristine. In addition, characters wore minimal makeup, allowing us to focus on the characters’ experiences and the depth of the storytelling.
Besides the overarching theme of feminism, King’s journey demonstrates that in order to win something significant or achieve a major goal, many times one needs to make sacrifices. In order to promote equality between the sexes in tennis, King throws away the security of her competitive tennis career when male authorities there do not give her fair earnings, and temporarily puts aside tears in relationships to focus on winning the “Battle of the Sexes.”
I felt a personal connection to the tennis girls in “Battle of the Sexes,” in a common understanding that based on factors outside of our control, sometimes we start out at a disadvantage; the playing field is not always level. However, there is a certain beauty to knowing you rose up based on your own efforts and merits.
“Battle of the Sexes” could have placed greater focus in engaging movie audiences by building tension during the climactic tennis match. The tennis match which inspired this movie was already highly entertaining, with grand entrances by both King and Riggs and both parties presenting each other with ostentatious gifts before the match. This was more than just a sports match, as it was clearly an entertainment event and a defining moment in garnering recognition of the contributions of women, so more emphasis and excitement should have been built into the final tennis match scenes.