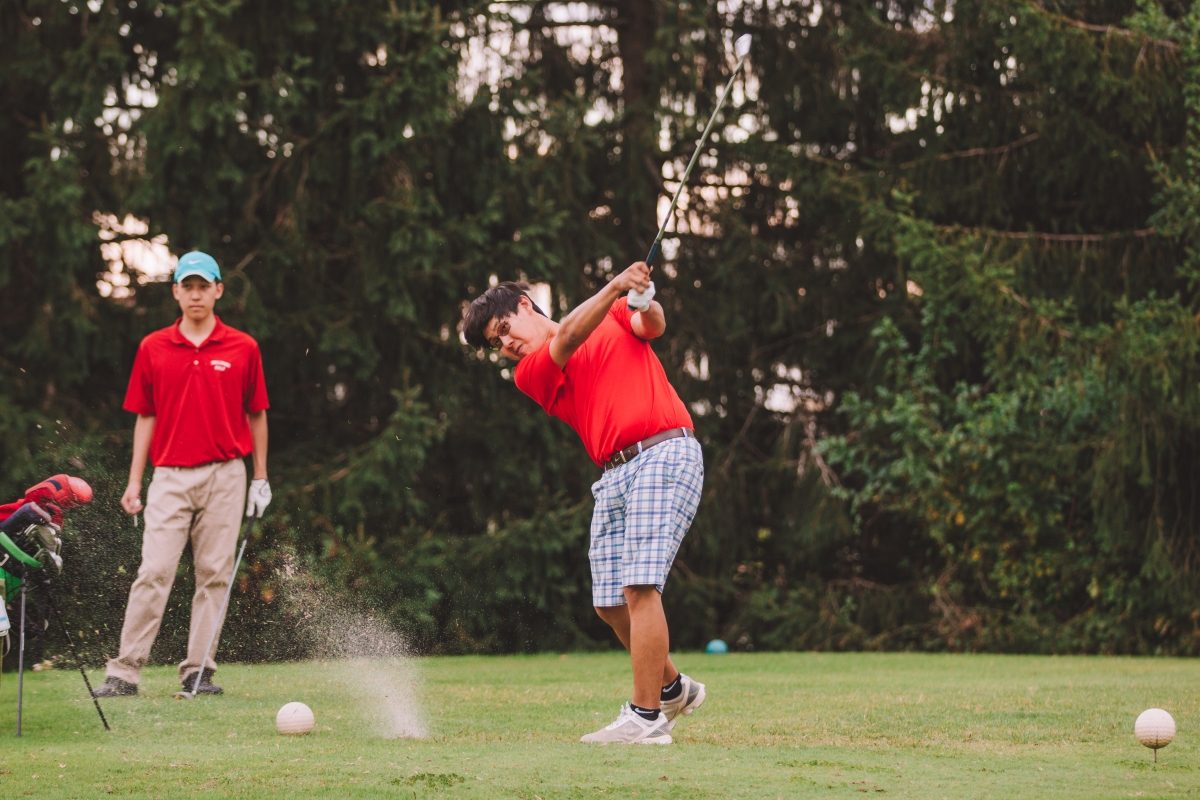 Senior Min Kang takes a swing and senior Richard Pan waits behind him for his turn at the tee during golf senior night on Sept. 14. Kang has played golf for Jefferson since freshman year.

The atmosphere was ripe for a win. Following a modest ceremony at the Pinecrest Golf Course, accompanied by cheers from his teammates and a bouquet of flowers from his coach, senior Min Kang stood at the teeing ground, ready to swing his first shot. With senior Richard Pan by his side, executing a set of excellent swing mechanics, putting and chipping, Kang came in second as an individual and contributed to another victory for the golf team amidst its fourth undefeated season in a row.  It was a fitting swan song for three of the team’s seniors–Kang, Pan, and Patrick Toulme–who celebrated their senior night on Sept. 14.

“I didn’t care too much about senior day on the golf team in my previous years, but now that I realize it was my last match, I really got to appreciate it a lot,” Kang said. “Thinking it was my last match was kind of emotional, and I got a lot of things to work during the match, so I would say I was pretty happy about it.”

Over the years, Jefferson’s team has lost many golfers–including Class of 2016 graduate Nathan Chuwait and Class of 2015 graduate Julie Luo, both of whom were pioneers of the team’s initial successes.

“After [Chuwait and Luo] came, [the team] really started having those undefeated seasons, and we were conference 13 champions all the way,” Kang said.  “We could really rely on them to play well, and depend on them to carry our team to victory.”

Despite the loss of senior golfers, the team has continued its winning streak. Toulme attributes several factors to the team’s success.

“Our team’s skill, great work-ethic and leadership of our great coaches led us to an undefeated season,” Toulme said.

The golf team’s coach John Myers played an integral role in training the team for a win.

Attendance at the senior night included principal Ann Bonitatibus and student activities director Rusty Hodges.  After the three seniors teed off, Coach Myers presented them with flowers to honor their accomplishments.  For Toulme, the event was a night to remember.

“[Senior night] reminded me of how far our team had come and all the great memories we shared,” Toulme said.  “As an underclassmen, you are somewhat sad to see the seniors leave, but as a senior, you are proud of your accomplishments. I know that is the case for me.”

The golf team went on to win its fifth consecutive state championship title at the Capitol Conference 13 Tournament at Greendale Golf Course from Sept. 18 to 19.