Stephen King’s “It” floats into theaters 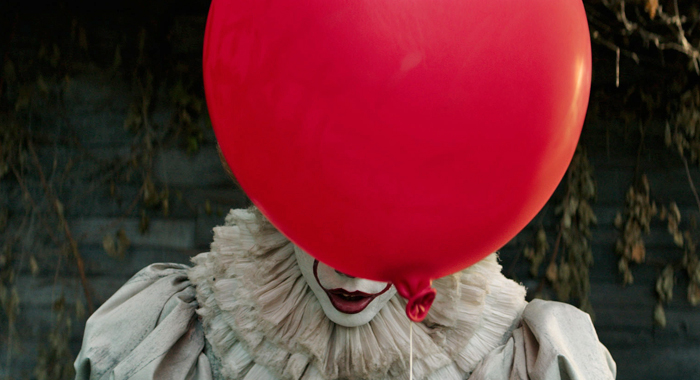 Photo courtesy of Warner Bros. Pictures. Pennywise the Dancing Clown hides his face behind a red balloon before confronting one of his victims.

Disclaimer: The Motion Picture Association of America (MPAA) rates It R for violence/horror, bloody images, and for language. Viewers under 17 must be accompanied by a parents or adult guardian in order to watch the movie.

It, a movie adaptation of Stephen King’s novel “It”, is a movie about a shape-shifting creature who takes the form of a clown named Pennywise, played by Bill Skarsgard, to feed on the children of Derry. The movie focuses on Pennywise’s attempts to prey on a group of seven kids, who call themselves the Losers Club and band together to defeat the demon. Many critics have compared It to a popular TV show, Stranger Things, as both feature a group of kids working together in order to rescue someone; It and Stranger Things also share a cast member in common – Finn Wolfhard.

The chemistry between members of the cast and the ease with which they act really helps the audience to experience the movie through their eyes. Throughout the course of the movie, viewers learn about the hopes and fears of each main character, which creates many edge-of-the-seat moments as the characters they are rooting are hunted and tormented by Pennywise. According to director Andy Muschietti, Skarsgard was told not to interact with the kids on the set so they would not get desensitized to his appearance.

The movie’s use of Computer Generated Graphics (CGI) is another factor that makes it terrifying and more believable. Pennywise feeds off fear and thus shapeshifts into the worst fear of each of his victims in order to scare them, and the CGI is effective in conveying this. The CGI is also used to create unforgettable scenes, such as one in which a pool of blood erupting from a sink, and an especially terrifying one where Pennywise appears to emerge from an image being projected onto a wall.

Apart from Pennywise’s antics, another aspect of the plot that made the movie scary was the ignorance of the adults in the town. Despite knowing that kids were going missing, the adults seemed to be purposely ignoring the horrific events happening in their town and chose to simply believe the missing kids were, in fact, missing and not being eaten by a demonic creature. In fact, there was little to no mention of any efforts being made by authorities to locate the missing children, they simply issued curfews and warnings.

Despite being very well made, I felt like the movie relied too much on jump scares to keep the audience engaged and terrified. One after another, the jump scares kept coming, and it was a little overwhelming. However, there was a good balance of humors and jump scares. Since the movie was rated R, the screenwriters had more freedom with what the kids could say, including curse words and sexual jokes, and the characters were able to find humor and friendship in a dark situation.

At the end of the day, the movie definitely goes at the top of my list of my favorite horror movies. Despite being scared, the kids worked together with courage, and I enjoyed seeing their interactions with each other and Pennywise. Not only did they have to defeat a killer clown, but they also had to face bullies, something many members of the audience can relate to. The end of the movie revealed an obvious sequel, and I look forward to seeing what is in store in the next movie.