To Read or Not to Read: “Challenger Deep” by Neal Shusterman 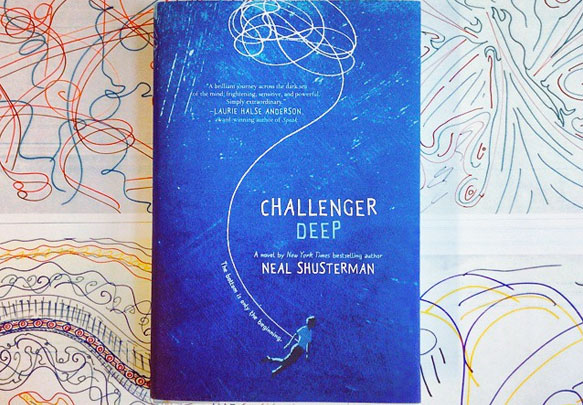 "Challenger Deep" by Neal Shusterman is a coming-of-age novel that discusses the implications of and stigma surrounding mental illness.

What a moving end to my summer.

I don’t know if I can find the right words to encompass the love and appreciation I have for “Challenger Deep.”  I flew through this book, yet simultaneously felt the weight of every word.  This book challenged, educated and touched me all in the same breath — and the only way to know exactly what I mean is to read it.

“Challenger Deep” follows Caden Bosch, a high school student who begins to experience hallucinations and lapses in reality.  The book alternates between the perspectives of Caden interacting with his family and friends, struggling to gain a grasp of what’s real, and Caden as a sailor, who is embarking on a treacherous journey to the deepest sea trench.  Caden recuperates in a mental hospital, and his hallucinations blend together with his memories as he tries to get his head above the water.

“Challenger Deep” features two storylines moving forward consecutively, which was confusing at first, but Shusterman’s masterful command of the narrative allows each plotline to enhance Caden’s journey as a whole.  Events from Caden’s life influence his hallucinations; the hospital room where he receives his medication is the Crow’s Nest cocktail bar that sailor Caden frequents, and a girl named Callie that Caden befriends becomes the bronze fixture Calliope positioned at the helm of the ship.  Jarring experiences for Caden–a negative reaction to a medication, for example–are reflected as such in his parallel experiences–an invasion of slimy worms and his brain slipping out of his head.  As Caden starts to improve, the chapters featuring Challenger Deep grow more sparse, and vice versa.  Shusterman took a considerable degree of care to intersperse Caden’s visions with reality in a manner that significantly enhanced the novel as a whole and allowed me to better understand what Caden was feeling.

This book had a profound impact on me.  I don’t feel qualified to speak with complete authority as to Neal Shusterman’s portrayal of mental illness throughout the book, but I did appreciate Shusterman’s reluctance to put a label on Caden’s symptoms.  Shusterman captures Caden’s paranoia and delusions with vivid clarity without placing him in a box or categorizing him with the name of a disease.  Furthermore, Caden is defined by more than his illness; he is an artist with an abstract and captivating style.  A scene where Caden produces a drawing to capture the personalities of his friends in the hospital really stood out to me.  Finally, Shusterman presents Caden’s parents and sister as loving family members that genuinely care about him and support him without relent–Caden’s parents take him to the mental hospital after his symptoms manifest and visit him frequently.  Shusterman takes care not to sensationalize or dramatize the concept of mental illness–he takes it very seriously, and in doing so, creates a novel that is thought-provoking without being unrealistic.

I may never run out of words to describe what “Challenger Deep” made me feel.  I wish that more books like Shusterman’s were out there to debunk common literary stereotypes when it comes to mental illness, because they truly deserve to be.