Right off the bat: the JV baseball team’s early wins set them up for a successful season 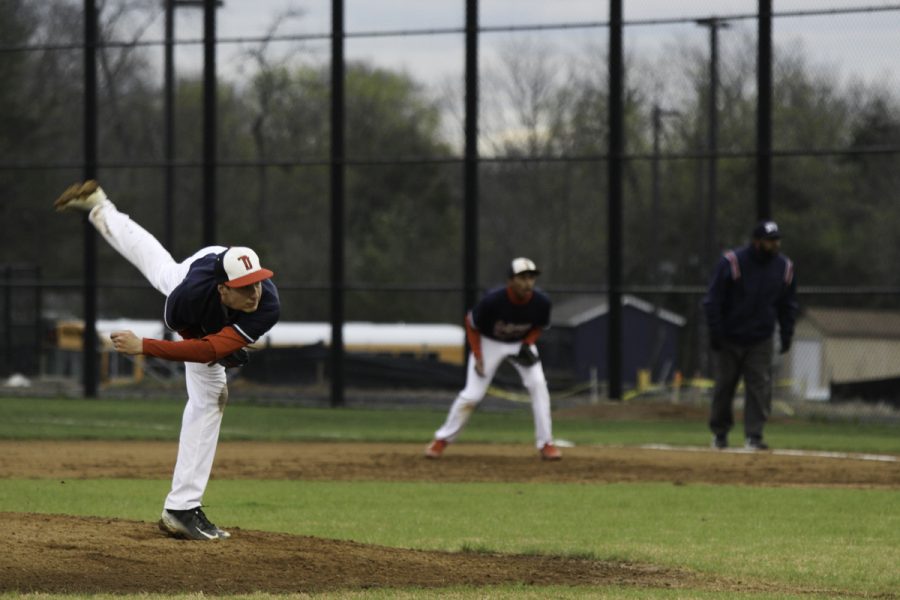 Freshman Andrew Arnold pitches the ball during a game on Apr. 7.

It can be a safe bet that making a joke referring to “sports” and “TJ” as a Jefferson student will be met with positive reception and a few chuckles. After all, Jefferson specializes in science and technology, and for many, athletics comes secondary to academics. However, numerous feats and titles, especially from larger teams, have challenged this idea.

Baseball, in recent years, has not been the most popular sport at Jefferson, with a limited social media presence and a record where losses exceed wins. However, the 2017 spring season saw a change in the JV team, which ended with nine wins to four losses. The team, finishing second in the conference, lost to only one team more than once: Marshall, which finished first.

Knowing the team’s past record, including a 2016 season with two wins, many incoming players were pleasantly surprised with this year’s results.

“I expected maybe 6 [to] 6 or something like that,” freshman Andrew Arnold said. “And we started out this season 5 and 0, and I thought, ‘Wow, we can actually be the best team in the conference,’ unfortunately we didn’t quite get there, but I’m happy about our record.”

Though there is no one factor that went into the team’s success, there were a number of changes that the team experienced at the beginning of the season, one of which being the team’s makeup. Nine out of 18 players- half the team- were freshmen this year, but the majority of these incoming players had years of experience behind them.

“Having more experience let us focus on the finer points during practices, which led to crisper on-field play and well-played games almost every game,” freshman Charlie Dobson said. “Having a lot of experience let our coaches mix up our lineups and positions, as many people have played different roles in the past. It also let the less-experienced players get some time because there was a level of confidence that the experienced players could pick them up on the field.”

Another change the team experienced this year was in its coaching staff. While assistant coach Rob van Wijngaarden returned for the 2016-17 season, head coach Adam Vance and Greg Rolles were both new, previously having coached travel baseball together.

“Each of us has a pretty good overall understanding of the game but does have areas of the game we know best,” Vance said. “I think more importantly we share a similar philosophy or approach to coaching and love for the game. We’re vocal but try to be positive.”

A personal advantage that some pitchers saw was left-handedness. Though this does not have a significant effect on batting, it allows the pitcher to throw the ball in different variations, and has a higher chance of catching the batter off guard.

“About 75 percent of pitchers are righties, so when [batters] face a lefty, their timing can be thrown off,” Arnold said. “[For instance,] a right hander’s slider [a pitch thrown at an angle toward the pitcher’s glove, but with less depth than a curveball]  would move from the right to the left, from inside to outside against right handed batters, a lefty’s slider would move from left to right, outside to inside against right handed batters. The best advantage is just keeping the batter on his toes because of the different movement of the ball and the different release point.”

On the other hand, everything comes with its challenges. Players, including freshman Jae Canetti, encountered personal challenges this season.

“I got hurt twice, I pulled the same muscle in my hand twice, and I lost a lot of time hitting,” Canetti said. “I’ve never dealt with an injury before, so I kind of had to learn how to deal with that and get back into the lineup and resume.”

“On varsity, a few runs will win you the game, whereas on JV you’ll often see scores upwards of ten runs,” Dulaney said. “That makes an extra bunt here and a stolen base there that much more important to winning a game on varsity.”

Freshmen on both teams, who will be playing together for the next three years, are optimistic about the future.

“The class of 2020 is probably the best baseball class that TJ’s seen in a long time, so we had like, five [to] six freshmen playing varsity for the playoffs, and we had a lot in JV also, so that definitely helps because we have a lot of strong players this year,” Canetti said.