Friends who stick together 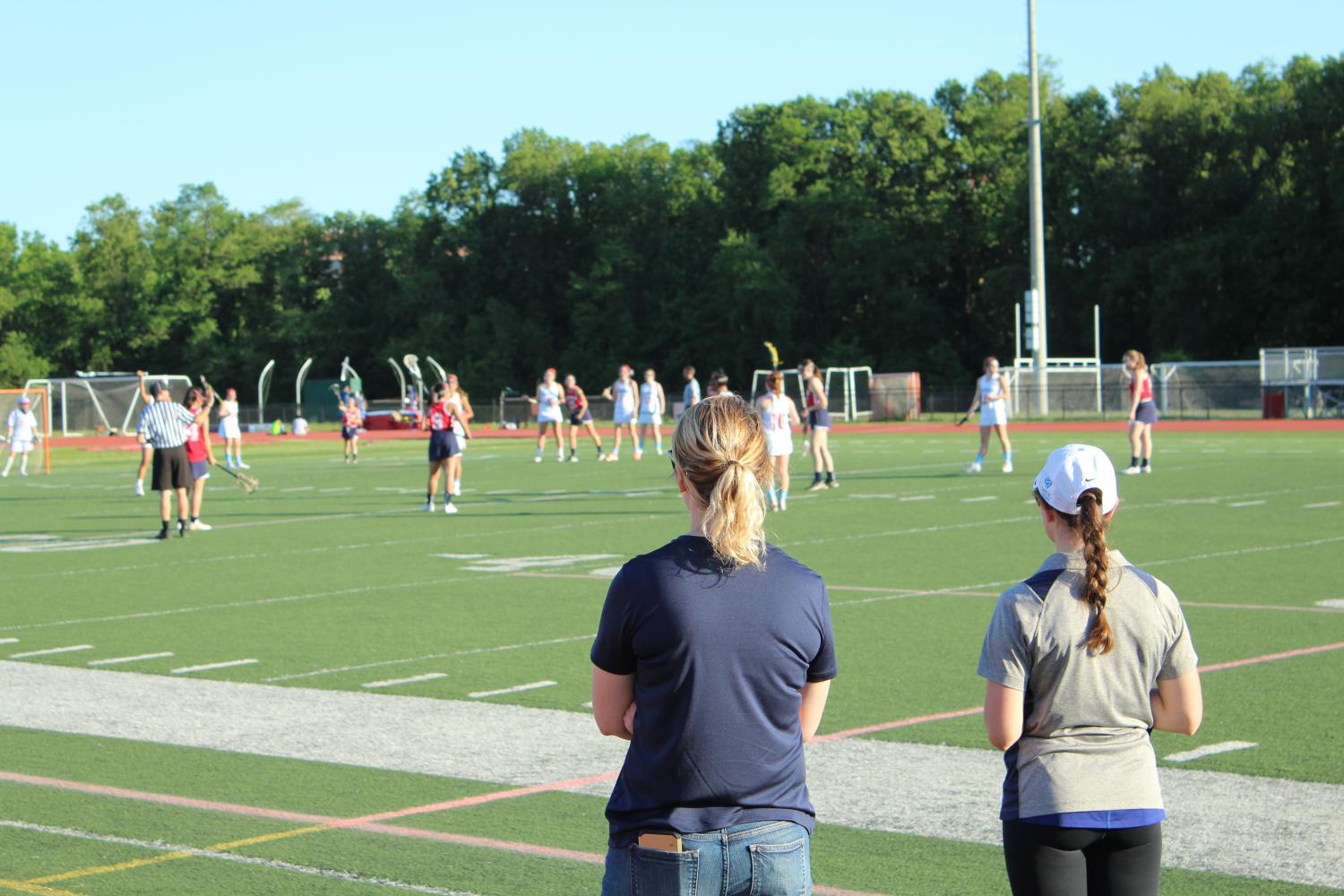 Jefferson Coaches (from left) Jacqueline Belker and Lauren Alam look on as a game progresses.

If you play a sport, you probably know how close of a bond you can develop with teammates. In most cases, for a team to be successful the players have to be close with one another so that they can understand each other’s plays and decisions during a game. What might not be as obvious, is how friendships between coaches can also improve the team.

Jefferson Lacrosse Coaches Lauren Alam and Jacki Belker have shown the benefits of having coaches be close friends. Back when the two were freshmen on Marymount University’s girls lacrosse team, they developed a strong bond through love of the sport. Although they moved to different states after college, they still kept in close contact, and this year they were able to reunite as co-coaches of Jefferson’s girls lacrosse team.

Alam, the current head coach, was also coach last year. As the new season approached, she encountered a dilemma. She didn’t have a JV coach, and while she was up to the task of coaching both teams, it would be very challenging because she already has a daytime job. Alam turned to her friend, Belker, who decided to accept the position. Since then, they have both been happy with the decision.

“It’s been really great [having Belker coach],” Alam said, “You don’t have to necessarily start off trying to get to know the person and learn their coaching style, and learn the style they play, or try to understand what they had done before. I know all of that because I know her so well.”

For Alam, having the new coach be a familiar face did not only mean less time she had to spend learning about a new person — it also proved to be a huge stress reliever for when she had to leave the team for a week. Every year Alam has to travel to Florida for a conference for her year-round job with the American Bakers Association, and usually leaving the team is extremely difficult for her. However, with Belker as her substitute she was able to relax a little more.

“I have to leave the team with whoever else I have on the staff,” Alam said. “This season [it was] really easy to trust whoever was going to be there, because I’ve known her [Belker] now for six to seven years, so I knew the girls were in good hands. She knew how I kept the team, how I did things. It was a really easy thing for me, much less stressful than last year just because I was more familiar with who was going to be staying with the girls.”

This was Belker’s first year coaching, and although she was hesitant to take the job at first, she is glad she did because of her experience this season.

“It was really fun [to start coaching], I really loved the experience,” Belker said. “I love the game of lacrosse so it’s fun to be able to share that passion with somebody else, especially the TJ girls, because they’re passionate about school and everything else that they do… It’s really fun to see them kind of step into a different role as an athlete and [to] share my experience with them, and show them why I love lacrosse and how really lacrosse is more than just a sport to win, it’s a sisterhood.”

The two coaches work well together not just because they’re friends, but because they both have expertise in different areas of lacrosse. Alam use to have the defending midfielder position while Belker was an attacker. Their varying backgrounds allows them to help each other coach their respective teams in the areas they are not as strong in.

“We both have these different perspectives,” Belker said. “So it’s really good because we can help each other. And we both know the game of lacrosse, but sometimes when you’re so focused on one aspect of the game, like for me… I can forget some of the things that the defense did, so she just steps right in and helps me on that end, and I can help her as well.”

This year the varsity girls lacrosse team had a 4-9 record, better than any record of the team in the past couple years. They also made it to semifinals for the top seed. Together these accomplishments attest to Alam and Belker’s coaching abilities. Alam recalls having Belker’s assistance during the postseason as being particularly helpful.

“In the playoff games [it was] really helpful to have her on the sidelines full time with us,” Alam said, “For a bunch of different things I was able to completely split [the team] in the practices in the postseason, like I could take the defense, she could take the offense.  We could do a lot more specializing and focusing in on certain things when it came to the end so that was really awesome.”

In addition to what they have taught the team about the sport of  lacrosse and technical components of it, Belker believes they have also instilled some life lessons in the players.

“You can learn so much about teamwork, leadership, really coming together,” Belker said. “There are just so many elements that relate into life and the real world… I didn’t realize how special it would be going from a player to a coach, and it’s really not that much different, but it’s so much more fun to see you teach somebody something and they just excel at it, which really is so powerful.”

While in some careers it’s frowned upon to work with friends because of the effects it may have on your relationship, it seems there were no major challenges the two faced coaching together this year. In fact, Alam thinks that working together has helped them get closer.

“I would definitely say it [working together] has [strengthened our friendship],” Alam said. “It’s allowed us to experience a different side of the game together which is always fun… It’s allowed us to spend more time in more situations in a different light — coaching, rather than being the players in the game itself.”

Belker also feels that coaching with Alam has strengthened their friendship. She also believes that their close relationship has not only helped their coaching, but also serves as an example of the close relationship they want the Jefferson lacrosse players to develop with one another.

“Being able to coach now with Coach Alam is an even greater experience for our friendship because we are just showing these girls that same bond and connection through the game of lacrosse,” Belker said.

While they both agree that their friendship has grown even more this year, they have been very close for a long time now. The two almost never go a day without communicating with each other on some form of social media. They have also overcome huge obstacles with each other’s support. One such time when they really proved their friendship was during their freshman year of college. Alam was badly injured during the season and it turned out to change things for her completely.

“I ended up tearing my labrum in my hip my freshman year, and I’ve had two hip surgeries since then. And it just can’t take the constant rotation from the sport itself, so I can no longer play full time,” Alam said.

For almost anyone, when you have a vision for your life and it does not work out, it can be really difficult. It’s usually times like these when you need your friends to be there for you, and that is exactly what Belker tried to do.

“I feel like that is a really hard thing to go through, especially when you’re going to college and you’re playing a sport.” Belker said. “You have your heart set on playing on lacrosse in college. I know a lot of athletes at all different levels go through this, and then you get injured and that kind of puts your lacrosse career, whatever athletic career, on hold. You go through a lot with that, from getting treatment to having to sit on the sidelines and watch practice and sit and watch games, that’s really hard. And I feel like I was able to help and support her to get her back to where she is now, being a strong coach. Just supporting her, because I know it was really hard.”

Alam did not let her injury end her career in lacrosse. She was able to continue to be a part of the team as a student coach, and now as a coach for high school lacrosse. Working together to guide the Jefferson girls, Belker has also been able to notice certain characteristics which shine through in Alam and complement her coaching. That inability to play herself due to injury seems to make her even more passionate about coaching.

“I think this [her injury] is also why she loves coaching, because it was so hard to be standing on the sidelines and seeing someone give up or seeing someone not put their full potential out there,” Belker said. “She is so great at communicating that to someone and saying ‘Hey, look, I’m standing here on the sidelines and I want this so badly for you, you have to want it for yourself.’ And that can’t be easy to tell somebody, especially when you’re standing on the sidelines and you so badly want to win a conference game or a championship game and you can’t. So she had to find a way to still be a part of the team and support the team and be strong herself.”

It appears Alam was able to take her lemons and make lemonade, and Belker recalls her strength during their college years and her focus on supporting her teammates, which is the kind of attitude Belker strives to teach the team.

“She was able to help me so much more than I could ever help her because in a game if I just had my head down and I was upset because I didn’t make that goal, she would pull me and talk to me and say ‘Hey, you got this, take a deep breath, relax. I know that you can do it, you know that you can do it. You just need to go out there and show everybody else that you can do it.’… That is what really makes a good friend. And being able to see how you can help your friend get through tough situations on and off the field is exactly what we want to show the girls on the team.”