Girls tennis and the social growth that comes with Jefferson sports 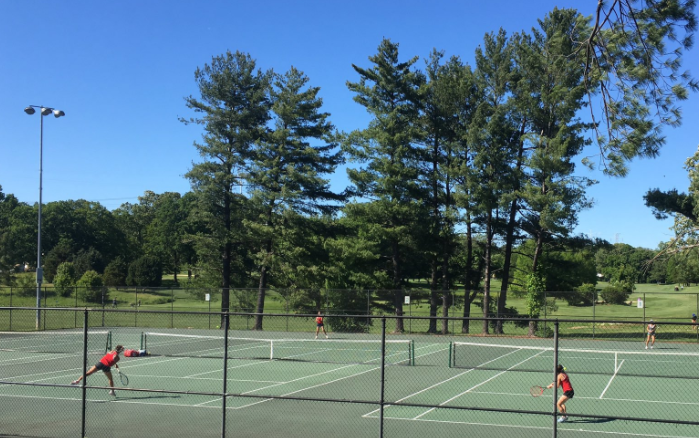 “We came for the sports,” a satirical statement and yet not entirely wrong. While Jefferson may be branded as STEM based school, it’s sports department isn’t as lacking as some would believe, with an abundance of students invested in various sports as well as academics.

“I started playing [tennis] when I was around six or seven and I just really like the sport, I like the competitiveness and stuff, so I just kept playing.” junior Keely Wan said. “[Sports and academics at TJ] are definitely different, I think most people at TJ they care more about academics than sports, but sports play a really important part in our atmosphere, especially football and our spirit at homecoming games, they tie into each other.”

For those involved in sports and invested in academics, there seems to be a common belief that major similarities between the Jefferson community’s atmosphere around sports and academics lie in mutual support and school pride

“ I feel like it’s similar in the way that everyone supports each other, I know that some people say that Tj’s really competitive, but it’s more like that a lot of us support each other, like if we’re struggling over the same classes we’ll bond over that.” senior Jelena Liu said. “And for tennis it’s the same way, we can all laugh at ourselves but also cheer on each other.”

No matter someone’s perception of Jefferson community in itself, there’s a general agreement that being a part of a sports team allows you to be part of a supportive group filled with fun.

“[The best part of TJ sports is] definitely meeting new people and having a lot of friends.” Joyce Liu said.

Jefferson sports also enable parents to get involved in ways they usually would be unable to with just academics. From insightful tips to encouragement, parental involvement in sports brings various unique dynamics to families.

“[My parents] definitely do prioritize academics more, but they do think tennis is important because it’s more flexible and they know it’s a really great way to de-stress and just relax and have fun with my friends.” Joyce Liu said.

For some, sports and various extracurriculars are the easiest way for their parents to be involved in their lives and input concrete critiques that help their child improve overall, as well as forming a tie between student life and family life.

“My family has been playing tennis since I was very little, my parents both play and they have their own little grown up teams that play in tournaments. I think that when my parents are at my games it’s a little more nerve wracking for me because they can see if I miss a shot and they’ll know why. I just feel a little more pressure when they’re there.” Jelena Liu said. “[With academics and sports] they’re supportive either way and they want to help, though with tennis they can help more because they know more about tennis than specific topics in specific classes. They can practice with me, whereas with studying or something they don’t know enough to be super helpful.”

Family support doesn’t need to be limited to concrete help, general encouragement and positivity for sports can offer a relatively stress free way to bond or be involved with the lives of students.

“[My parents] aren’t always watching me and telling me ‘Oh you got to do your work’ or ‘Do this,’ I guess to both of them they just want me to do what I like and what I enjoy, and so they don’t want to pressure me into doing anything and so if I don’t like something, like if I don’t want to go to a match or a practice, they won’t pressure me into going.” Keely Wan said.

In general TJ sports opens up doors for students when it comes to various relationships, and the addition of exercise and fun makes it an enjoyable experience for those involved.

“My dad, he definitely cheers me on and always tells me ‘Never give up, even if you are losing, just keep fighting,’ and their support has meant a lot to me and they come to my matches, and I think that’s really important and why I like tennis,” Keely Wan said.