“The Sound of Music” in perfect pitch at the Kennedy Center 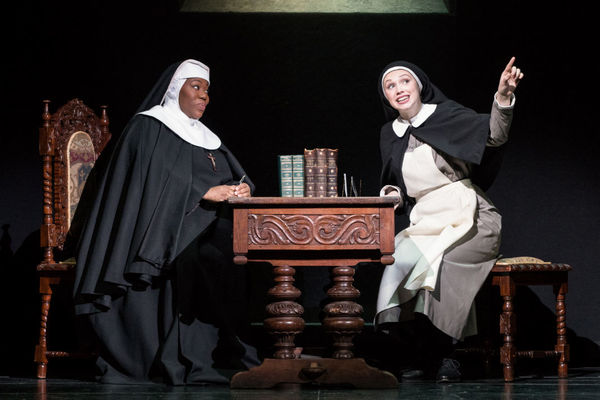 Charlotte Maltby and Melody Betts star in "The Sound of Music," now performing at the Kennedy Center until July 16.

The lights dim.  All eyes swivel to center stage, where a line of nuns slowly shuffles onto the stage.  The audience waits expectantly in hushed silence.  The nuns take a deep breath.  Then, a wave of spot-on harmony rushes over the filled auditorium seats.

“The Sound of Music” is a movie and musical beloved to many, and it is currently playing at the Kennedy Center in Washington D.C. until July 16.  I watched it on July 2 and was blown away by the level of sophistication and dedication present in everything from the sets down to the songs.  I highly recommend the show to anyone looking to add a little song to his/her summer.

“The Sound of Music” tells the classic story of Maria (Charlotte Maltby), a nun with a passion for singing and a penchant for unintentional rule-bending.  The Mother Superior (Melody Betts) sends Maria to become a governess for the Von Trapps, a family of seven children and one father (Nick Rodriguez) whose love of life has faded after the death of his wife.  Maria wins the hearts of the Von Trapp children and eventually Captain Von Trapp with her smiles, laughs and songs.

This musical is one dear to my heart, and I believe that the Kennedy Center performance did it more than justice.  Charlotte Maltby was stellar as Maria, playing the character with just the right blend of awkward and cheerful.  Her performance of “The Hills are Alive” was simply magical; Maltby gave life to the song, shaping each musical phrase with ingenuity.  However, the character that stole the show for me was without a doubt Melody Betts as Mother Superior– Betts’ powerful voice swept through the auditorium with its vibrato and volume, and her rendition of “Climb Ev’ry Mountain” is still resounding in my ears.

The set design for “The Sound of Music” was very impressive.  In many theater productions, the stage goes dark while backstage workers slide props into place for the next scene; in “The Sound of Music,” set transition was seamless and integrated into the scenes themselves.  While one character finished up a musical number, new props slid into place for the following location change.  The black backdrop present for the nuns’ scenes parted to reveal a hilly landscape for Maria’s scenes all in the span of a few seconds.  I never felt bored for even a minute; there was always something new for my eyes and ears to take in from the first note to the last.

“The Sound of Music” is known for its songs, and I mouthed the words to all of them along with the cast.  Liesl (Paige Silvester) and Rolf’s (Austin Colby) performance of “Sixteen Going on Seventeen” was infused with the carefree, reckless spirit of two teenagers in love.  Nick Rodriguez’s moving “Edelweiss” nearly brought tears to my eyes.  All of Maria’s songs with the Von Trapp children were heart-warming and matched with sprightly choreography as the children circled around couches and stairwells and mimicked a cuckoo clock for “So Long, Farewell.”  The play really came full circle for me, taking me back to the first time I met all of the characters from the 1965 movie.

I left the Kennedy Center with a smile on my face and a song (or five) in my heart after watching “The Sound of Music.”  The talented cast, intricate set design and timeless tracks made the musical an experience to remember, and one I recommend having before the last performance on July 16.