“Doctor Who” shines in tenth season 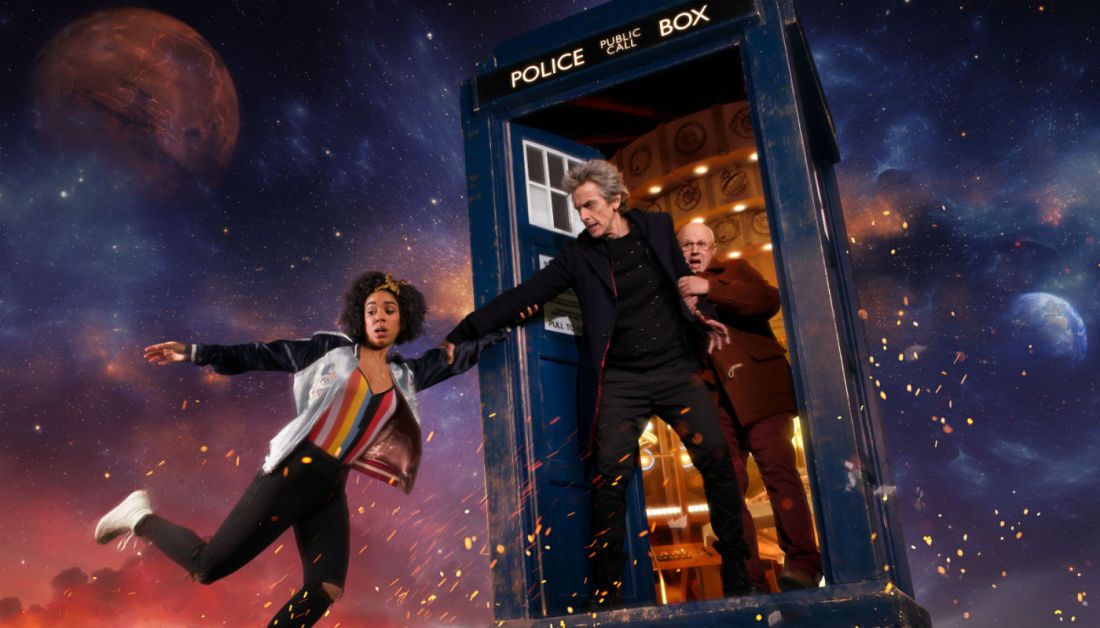 Peter Capaldi, Matt Lucas, and Pearl Mackie star in "Doctor Who," a science fiction television show from BBC. In its tenth season, the show tackled topics involving capitalism and racism

A thin bead of sweat drips down my forehead.  I make one last attempt to smooth out the tension seizing my body.  I unclench my fists, say a final prayer and begin.

No, this is not me taking a final exam or running a marathon.  This is me watching the season finale of “Doctor Who,” which aired on July 1 on BBC America.  Trust me, it was just as stressful as it sounds–but all of my panic and worry was well worth the payoff.

“Doctor Who” is a witty and captivating science fiction television show about the Doctor, an alien who travels through time and space in his police-box-shaped time machine.  Season ten of the British television show–the last one featuring the twelfth doctor, Peter Capaldi– premiered on April 15 after over a year of hiatus.

The season ten finale, “The Doctor Falls,” introduced an interesting set of villain(s) with the return of the Master (John Simm) alongside Missy (Michelle Gomez).  Simm’s character is a previous incarnation of Gomez’s, and both effortlessly execute the role of the Master, a fellow time-traveling alien who has butted heads with the Doctor on more than one occasion.  Simm and Gomez resurrect an army of Mondasian Cybermen on an immense spaceship positioned right next to a black hole, leaving plenty of room for commotion, conflict and chaos.

The most defining aspect of this season for me, without a doubt, was the Doctor’s new companion, Bill Potts (Pearl Mackie).  Mackie brought a unique spark and spunk to the role  of Bill that I fell in love with almost immediately.  Bill is the series’ first openly gay companion, and her sexuality is brought up numerous times throughout the season, but it isn’t the only facet of her character.  Bill constantly questions and challenges the Doctor, inviting a dynamic between Doctor and companion that is refreshing and exciting.  In the penultimate episode of the season, Bill becomes a Cyberman, and the Doctor is too late to save her.  I fought tears the entire finale as Bill struggled to accept her fate and rebelled against her new programming.  At the end of the episode, much to my relief, Bill is able to break free of her Cyberman body and escape into time and space with Heather (Stephanie Hyam), her crush from the season premiere.

Peter Capaldi shone in the finale with his stellar acting–a scene that stood out to me was his confrontation with Simm’s and Gomez’s characters, during which he encourages them to stand with him against the incoming Cyberman attack.  The Doctor presses that he does what he does not because it is easy, but because it is right, and pleads with the Masters to fight by his side.  The scene reminded me of the Doctor’s internal conflict from season eight, where he wondered whether or not he was a good man.  Two seasons later, he has fully settled into his incarnation and is dedicated to his cause of saving those in need.  Capaldi’s doctor will be regenerating during this year’s Christmas special, and his performance in “The Doctor Falls” did not make it any easier for me to say goodbye.

“Doctor Who” isn’t a perfect show by any means.  Its plots are at times predictable, its dialogue occasionally cringe-worthy, and its surprise twists unnecessary.  But all in all, season ten was one of my favorites, if not the favorite, in the show’s rebooted running.  Bill won me over with her charm and feisty spirit, and I hope we see her again in the next season.  The twelfth doctor excelled yet again in his rugged, raw perseverance and determination.  This season is showrunner Steven Moffat’s last, and while his run through time and space had some flaws, he certainly knows how to go out with a bang.